Soichiro Honda – Profile of a builder 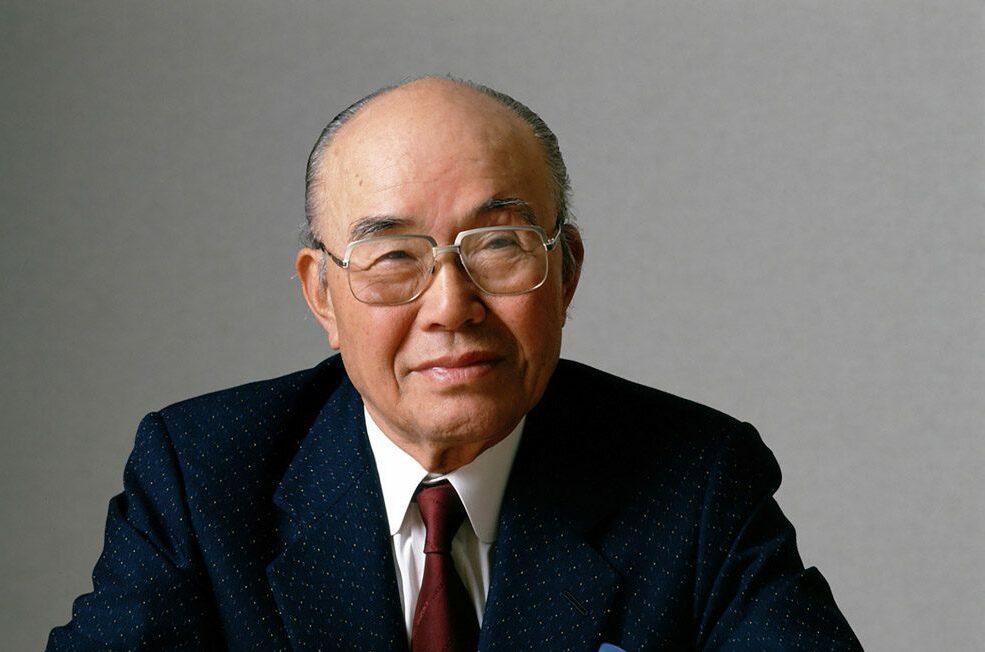 There are builders in Canada, but also abroad. At the beginning of the quad era, vehicles were needed. And Soichiro Honda was a pioneer. Before four-wheels, you remember that there were three-wheels, and the Japanese established in Hamamatsu city was the first big name in the industry to offer a machine of this type.

The man behind this is also interesting to discover. Seeing the very corporate image of the Honda company, you might think that its creator was a very integrated man, but he was not. He had a very personal vision, and he did not necessarily follow the hierarchy or the authorities in place.

Soichiro Honda was born in 1906 in Hamamatsu, Japan. His father was a blacksmith, and his mother a weaver. She even built her loom to make unique patterns. These creative professions may have had an impact on the rest of Soichiro’s career. Dad repaired bikes he bought broken. Little Soichiro helped his father from an early age, and he took a liking to bring bicycles to life, not hesitating to handle the forge or find solutions to adapt parts. His intelligence was on the alert for practical cases, for everything related to mechanics.

Ever since he saw an engine as a child, he had been fascinated by these steel blocks made up of multiple pieces that managed to move together.

The traditional school interested him less, and his academic results were limited to an elementary school diploma. Very quickly, he became an apprentice auto mechanic for Arto Shokai in Tokyo.

He was a race mechanic for the Arto team on weekends, and he discovered this exciting world.

In 1928 he returned to Hamamatsu with his mechanics license and established an Arto Shokai branch. But it was not enough. He wanted to create car parts. He even founded the company Tohai Seiki to manufacture pistons, some of which were intended for Toyota. It was a failure. He spent all his savings in the business, but most pistons did not meet Toyota’s quality standards.

At this point in his life, Soichiro was a young man with no major education, on the verge of bankruptcy, and whose business plan had failed.

But the young Honda did not give up. He recognized that he did not have the necessary knowledge bases for foundry. His outlook on education changed. He returned to technical school, and he came up with a new cooling technique for racing engines. His design had an undeniable technological advance, and he wanted to prove it by participating in the races.

In 1936, he struck a stationary car on a racing circuit at 120 km / h. The terrible collision fractured his arm and shoulder, affecting his face, leaving him for three months in hospital.

He continued to manufacture pistons, but he wanted to do more than spare parts.

He combined his two childhood passions, and in 1940 he created a small motor that could be mated to a bicycle. At the start of the Pacific War, the concept appealed to the impoverished population who needed economic means of locomotion.

Honda’s company supplied Toyota with 40% of its piston needs and manufactured parts for aircraft and shipbuilding companies.

In 1945, Hamamatsu city was bombed by the Americans, and the factory was severely affected. It was a blow to Soichiro, who was wondering about the future of the country. He decided not to rebuild, and he sold the plant “as seen” to Toyota.

Honda announced that he was taking a year off. He bought a large alcohol tank to make his own whiskey, which he shared with his friends. He was undoubtedly spending this year “reinventing the world” but he didn’t know what fate awaited him.

With his head full of ideas, he founded the Honda Motor Company in 1948. The first small Honda motorcycle with a 2-stroke engine was called the Dream D. Then, a four-stroke engine arrived in 1951. The “Super Cub” arrived in the United States in 1958.

Behind the export, there was a little-known strategy that motivated Soichiro. Japan had lost the war against the Americans and allies. They had lost the right to have an army, and it was a huge setback for the honor and pride of these people. Several industrialists have decided to wage an economic war, take first place ahead of the Americans and Europeans, and produce the best vehicles at the best price. Honda did it. In motorcycles, the big guns were the Honda CB750 Four in 1968. It took on Harley V-Twins, BSA 3s, and Triumph T-150s, thanks to its reliable 4-cylinder engine, electric starter, and front disc brake. That was a revolution that has redefined the market. Honda did it again later with the car market. But he had to oppose the Japanese Ministry of Transport, which wanted him to join a consortium rather than create a different brand.

Once again, the nonconformist Soichiro imposed his own way, with the success that we all know. He came up with a different car, a low-cost sports model, the S500. Then the Civic appeared in 1972.

He rejected hierarchical management among his entrepreneurial positions, and he believed that employees were more innovative and hardworking if they weren’t forced. He also expressed his wish not to pass the business on to his heirs, preferring to leave it in the hands of qualified professionals. Incidentally, this declaration has strengthened the confidence of bankers for long-term loans!

Its rebellious attitude towards government authorities was manifested again during the oil crisis of the 1970s. The Ministry of Transport called on manufacturers to cut production and increase tariffs, and Soichiro was the only one to refuse. In fact, he did the opposite: he doubled production and lowered prices. His strategy worked: Nissan and Toyota sales went down 40%, while Honda increased 76%!

For the company’s 25th anniversary in 1973, the 67-year-old president announced his retirement. True to his word, the new president was chosen from among the employees.

His work continued beyond his retirement with several volunteer and honorary positions at the Association of Japanese Automobile Manufacturers or the Tokyo Chamber of Commerce. He is the founder of the Honda Foundation and an association on traffic and safety sciences. He has also worked on environmentally friendly technologies.

In 1988, Honda was the first Japanese automaker to be inducted into the American Automotive Hall of Fame. He also received the Blue Ribbon, Japan’s highest honor.

Soichiro Honda died at the age of 84 in a Tokyo hospital on August 5, 1991, from a liver problem.

Soichiro Honda’s advice: “I believe that success can only be achieved after failures followed by self-analysis. Success is only one percent of the work, and the rest is to overcome the obstacles boldly. If you are not afraid of them, success will come to you.”

The history of the quad, and before that, the three-wheeler, is linked to Honda because it is the first company to release a three-wheeler recreation bike. Since World War II, the idea of ​​adding a third wheel for more stability had been running in Soichiro Honda’s mind for the economy of operation and the possibility of crossing roads damaged by bombing. Later, in 1967, and in the United States, the mission was given to Honda’s engineer Osamu Takeuchi to develop a recreational vehicle for sale during the winter, which would not be a snowmobile, and which one could use off-road all year round.

For Canadian pride, we will highlight the Jiger ATV created in 1961 in Toronto, which is considered by some to be the first ATV, with a six-wheeled amphibious concept, which makes it the father of the ARGO. The company closed in 1968, but the Jiger served as inspiration, among other things, for the type of wheels to use.

Takeuchi worked on six-wheel, four-wheel, and three-wheel models. It was the latter that was chosen, certainly for economical reasons. After three years of gestation, in 1970, the Honda US90 three-wheeler appeared, with an ST70 engine bored to 89.5cc with a 4-speed semi-automatic clutch transmission and 22 in low-pressure tires, which served as suspensions. In the process, an ATC 70 model was produced for children.

The US90 was a big hit, and it appeared in the James Bond film “Diamonds Are Forever” which accelerated its popularity.

The name ATC (All Terrain Vehicle) was created and used by Honda. The second generation of three-wheelers was called ATC90, from 1974 to 1978.

In 1980, the ATC185 was configured for workers as well, with the option of being fitted with front and rear racks and a trailer hitch.

In 1981, Honda released a racing beast, the Honda 250R, which quickly established itself on the racetrack with a full suspension, disc brakes, and five speeds.

Two years later, in 1984, we saw the birth of the first four-wheel quad in the history of the Honda brand, the TRX200, the precursor of the FourTrax. 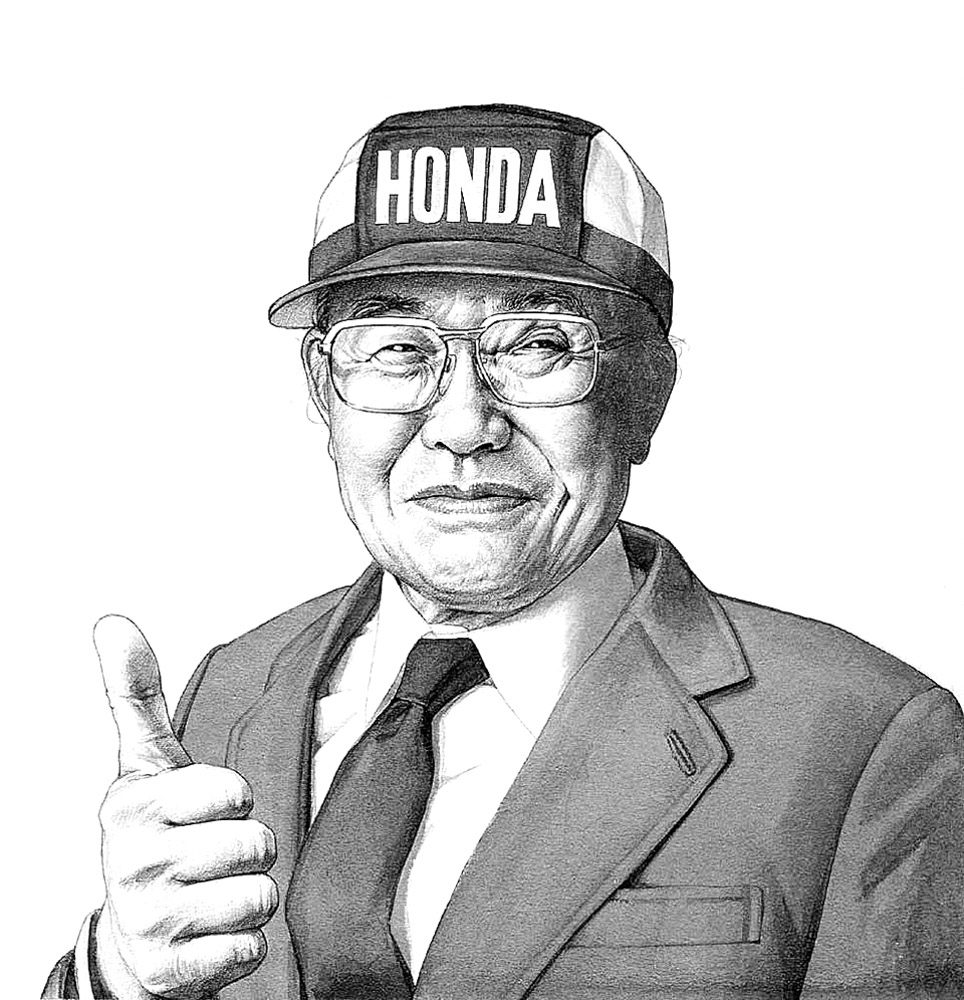 “I believe that success can only be achieved after failures followed by self-analysis. Success is only one percent of thework, and the rest is to overcome the obstacles boldly. If you are
not afraid of them, success will come to you.”

It was equipped with a four-stroke single-cylinder engine and a 5-speed transmission. It was initially fitted with the front and rear racks and foreshadowed the era of sport utility quads that would be used for work during the week and for riding on weekends.

Then follows a long list of quads and side-by-side vehicles.

It took a company like Honda to lead the way and set the standard for quality and efficiency in an off-road vehicle that has played an immeasurable part in our lives.