Profile of a builder – Chantal Contant 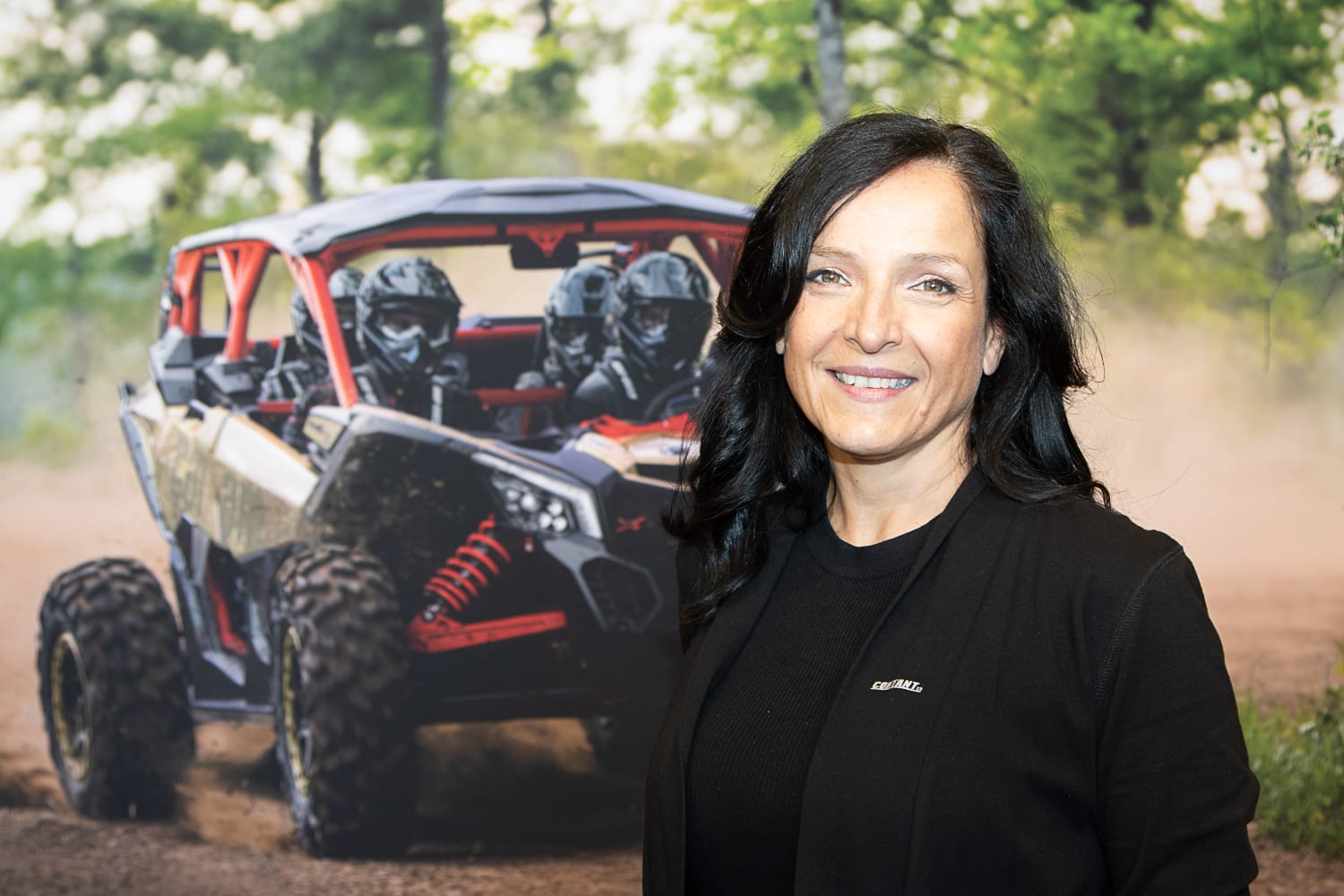 “Five cents a seat, hurry up, the show will soon begin!” At eight years old, Chantal Contant organized shows with her friends in the neighbors’ courtyard, with the sheet drying on the clothesline as a stage curtain. The money raised was used to buy sweets with friends. That was her first act as a businesswoman.

Chantal Contant was born in Laval, October 4, 1966. Most women don’t like to tell the year, but she assumes it proudly and seems to push the weight of the years with the same ease that BRP releases a new side by side every six months. Her brother Jean-Luc is a shareholder and works in the Contant family business, while her sister is a flight attendant for an airline.

Let’s make a step back in time, in 1938. Gaston Contant, the grandfather, moved to Mille-Îles boulevard in Laval, Québec, to sell wood, grain, charcoal, do snow removal in winter, and even build snowblowers. He died in 1955 and his wife continued the 55-employee business with 6 children to raise, including Jean, Chantal’s father, and Gérard, her uncle. They are already fervent snowmobile users and little Chantal was proud to be riding on the yellow Ski-Doo in the backyard, “sitting on the tank with no helmet”.

In 1970, the Terrebonne-based Ski-Doo dealer burned to the ground and did not reopen. This created a shortage of parts on the north shore of Montreal. That is when Gérard and Jean Contant contacted Bombardier, and they became authorized to sell Ski-Doos.

It is in this universe that Chantal grew up, and she liked it. At ten years old, she drove the manual transmission family car in the yard, under the watchful eyes of her mom who would like more feminine occupations for her daughter. She helps her father in the garage, passing the tools to her dad to repair the snowmobiles or the Gold Wing motorcycle. This was a way for her to see her father, who was very busy with the various business activities.

Chantal attended Collège Montmorency in Laval and obtained a college degree in administrative techniques. She worked at Stokes, while studying, and enrolled in college. At this time she had no idea of joining the family business. She saw her parents working very long hours during her youth. However, she’d been offered a summer job as an administrative assistant to help the controller, Ms. Marcil, in the family business. That was a revelation for the student, both in terms of the tasks to be accomplished and the great personality of Ms. Marcil, who taught her the basics of the trade. Chantal left school and joined the company in 1987. She would later complete a baccalaureate in human resources management, but for the moment, she just enjoyed the business.

She bought her first snowmobile and enjoyed winter rides on the weekends, mainly in the Laurentians, up North of Montreal, not too far from home because she had to come back to work on Monday. She appreciated the freedom that her Ski-Doo provides, and its ability to access unique landscapes that only snowmobiles can reach (Can-Am ATVs did not exist at the time).

She liked to be in contact with people who share her passion, and she doesn’t hesitate to go and sell accessories, vehicles, financing, service. All positions except mechanics. She helped the computerization of the company in the early 90s. In 1997, Mrs. Marcil fell ill and had to leave her position. Chantal became the controller, with 10 years of experience and knowledge of all the activities of the business.

Chantal enjoyed the intensity and craved even more action in her spare time. She still escaped by snowmobile and continued with that passion until 2005, the year of her daughter’s birth.

On occasion while we are chatting, she slips into a sentence, “When I was a dancer …”. She did aerobic dance or steps four times a week. And she was a dance teacher for three years. More recently, she combined her love of nature and the great outdoors with the sport. She likes skiing or running in the woods, training for trail running. Lately, she participated in the Salomon race and reached second place.

In 1998, Can-Am introduced its first ATV. This is a turning point for the company, which until then, had no motorized activity to offer for the summer season. Before, employees, including mechanics, left for the summer at Monette Sports, a well-known motorcycle dealer in Laval. The company could now keep its employees year-round, and diversify its offerings.

Some will ask the question, why did Contant not distribute Sea-Doo in those years? Well, here’s the reason. In 1988, when Sea-Doo was released, Contant was not satisfied with the product and they decided not to market it. We would have to wait until the dealership opens in Mirabel to find the Sea-Doo line in the Contant catalog.

In 2008, the company officially transferred to the third generation. It took several years and the help of outside consultants to finalize the transaction. The visit to the notary was very emotional. The company’s new chairman and chief operating officer has never seen so many papers to sign.

Despite the current economic crisis, many projects were under development. In 2008, a dealership was created in Mirabel, North of Montreal, along the A15 highway. The success was immediate, with a large modern building and large windows. In 2009, another shop was established in Sainte-Agathe-des-Monts, with a different but very complementary dynamic, which made it possible to cover a large sector on the north shore of Montreal. In two years, the number of employees increased from 50 to 120 people. This required many adjustments.

In 2013, the company was invited to enter the competition for emerging medalists, organized by Caisse de Dépôts du Québec and HEC. While Chantal expected nothing from this event, thinking that their “little business” was not going to interest these giants of the Quebec economy, the Contant group obtained third place in the prestigious competition.

This is one of the defining moments in the professional life of the Group’s director. A recognition that opened several doors. Media coverage on Les Affaires magazine and a professional promotional video was offered. This enabled Chantal to take part in the HEC mentoring conferences and to obtain the title of Mentor of the year, a great reward for a person who started her professional life at 21 as an assistant.

Another milestone was the signing of a strengthened financial partnership with the National Bank. This was a proof of recognition for the good management and good results of the Contant group, third generation.

Naturally, there are many significant moments, especially when we discover new vehicles, often presented to dealers in dream locations.

Chantal Contant is happy to work in this industry. “Our mission is to bring fun to people, to allow them to have their big toys.” But she recalls that her job is to be present, to listen, and to give the best possible buying experience to the client. Unlike a car, an ATV or a snowmobile is not an essential vehicle. You must know how to advise the client and meet their expectations.

Chantal recalls an older customer who wanted to buy a very powerful ATV, a Can-Am 1000 XT Outlander. The representative offered him a less fiery model, but more suited to his needs. The apprentice pilot didn’t want to listen to anything. Fortunately, in Laval, the customer could try the vehicle on a small track next to the store. He started making wheelies and finally rolled over on the side. After a third stunt due to the power of the engine, the customer came back and finally listened to the seller who offered him a smaller and more affordable ATV that was more suited to his real needs. “A well-advised customer will come back,” and Chantal has seen many come back in 33 years of business.

Business growth did not stop there. In 2020, the Contant group is head of 5 dealerships and a “showcase” store in downtown Montreal. Vaudreuil-Dorion is a very motorcycle-oriented center. It presents KTM, Kawasaki, and Honda, in addition to BRP products. The Riendeau Sport dealership in St-Mathieu-de-Beloeil has also passed under the Contant banner, which allows the group to set foot on the south shore of Montreal and expand its area of ​​action.

“The challenge now is to standardize the excellence of the welcome and the sales experiences in each branch. Each operates under the direction of a general manager, who has their own style. But in the end, the customer must come out satisfied, with the same price offer, and with the desire to give us 5 stars.”

What also makes Chantal Contant a builder is the help the Contant Group has been providing, since the second generation, to the community, and the ATV clubs. Contant is always on hand to support ATVs or snowmobiles clubs with advertisements on tourist maps, gifts for meetings, or by selling trail access rights for clubs. Technical information from customers and their suggestions are often transmitted live to designers and engineers at BRP in Valcourt.

Chantal Contant was kind enough to enlighten us on a figure that was currently unknown for us:

In the sale of off-road vehicles (excluding motorcycles) what are the share of ATV and that of the side-by-side? In units, ATV represents 73% of sales, and UTV (side-by-side) takes 27% of sales. In turnover, UTVs are more expensive and represent a greater economic weight than ATVs. We suspected it, but now we have some data.

Other encouraging information, in April 2020, during the pandemic, 2020 sales of off-road vehicles were higher than in 2019. There is a real craze for ATVs and UTVs right now.

Like all the builders, Chantal Contant reminds us that nothing would have been possible without a group spirit and everyone’s work. A heartbreaking moment was to send 250 of the group’s 285 employees home due to Coronavirus. Some have been there for thirty years! But it is only temporary, the Ste-Agathe-des-Monts shop reopened first, and the others followed.

Nothing could have been done without the trust of Bombardier, which has become BRP, says Chantal Contant. She will continue to manage this group which has increased fivefold since the succession. You can see Chantal behind the counter during the Open House, an important moment in the pre-snowmobile year. She is working like any employee, to be closer to her customers.

It’s fun to have a passion rather than just a job. As her parents said: “Be happy, you could have sold coffins!“

You may come across Chantal Contant on a Spyder this summer, she is looking forward to riding!