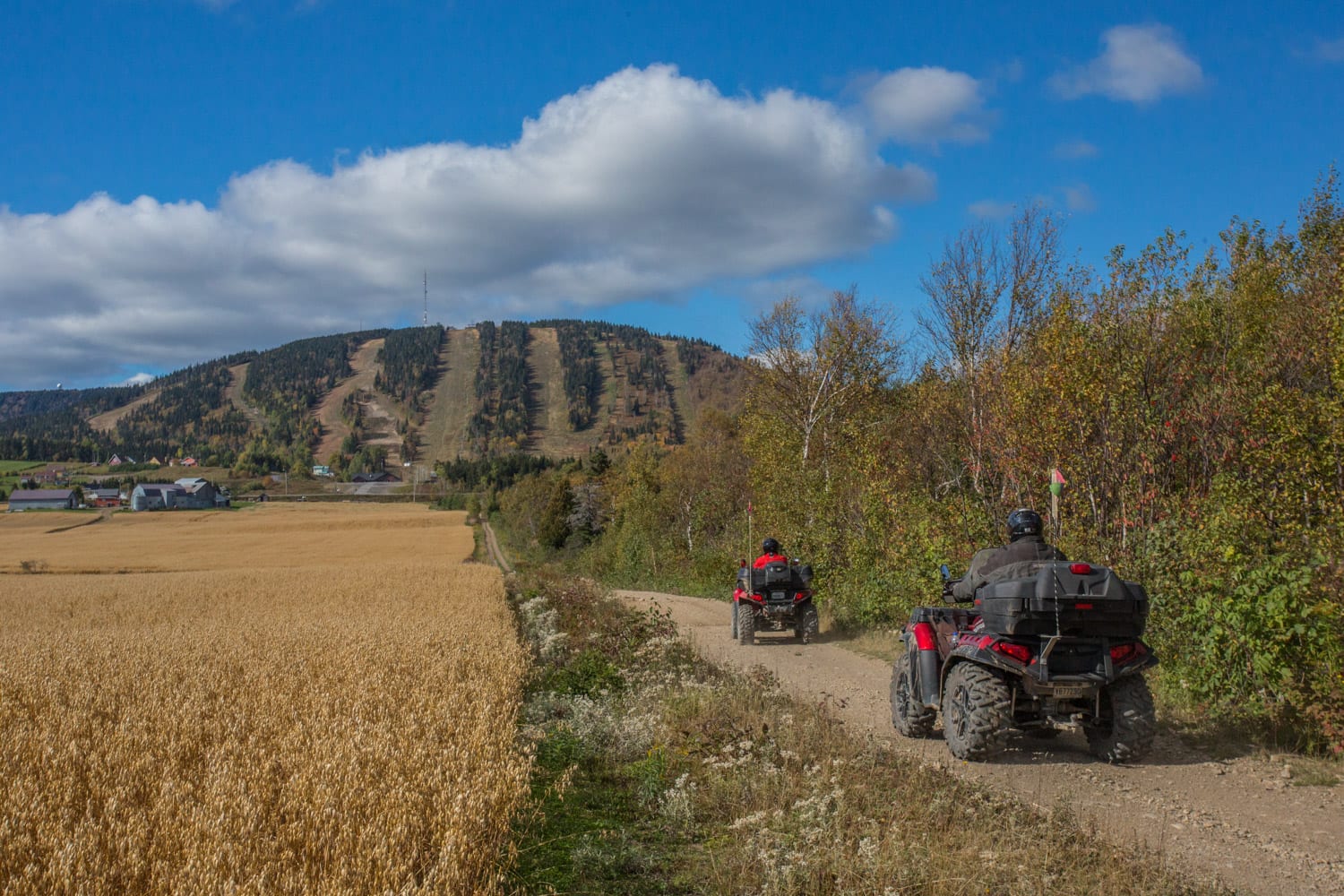 Seven questions to Tourisme Gaspésie to know everything

There is more than 2,600 km of trails accessible by quad and side-by-side in the Gaspésie region. With the sea, the Chic-Chocs mountains, and the Matapedia Valley, the landscapes are spectacular. To help you prepare for your trip, Tourisme Gaspésie answers seven frequently asked questions.

When is the best time to visit Gaspésie by quad?

The trails in the region are accessible in summer and fall. The sea and mountain landscapes are very spectacular once the trees are colorful, especially in the Matapedia Valley. However, accessibility to certain areas may vary because of the hunting season. Find out before you go.

How much time to expect?

The Trans-Québec trail that goes around the Gaspésie is approximately 1,500 km. Depending on how many kilometers you are accustomed to driving, there is usually a 7-day stay to complete the entire tour. That said, you can very well stay in the region for a few more days and explore a particular area.

What are the sectors to discover?

On the north side of the peninsula, we dive into the forest’s heart and the mountains. Réserve Faunique de Matane is the territory with the highest number of moose per square kilometer in Quebec. It is crossed from south to north by trail 807, which passes through the Étang à la Truite, a magnificent area for an excursion to the heart of the Chic-Chocs! Mountains. The trails also pass through Cap-Chat, where you can observe the wind turbines, and culminate at the top of Mont Saint-Pierre, from where you have a breathtaking view of the sea and the mountains.

The Matapedia Valley is recognized for the quality of its trails and represents a destination of choice for quad riding. This sector of the Gaspésie offers more than 690 km of trails, forest roads, and country lanes, allowing for one-day loops from a determined point.

To showcase its beautiful region, the Club VTT de La Matapédia has abundantly signposted its network. He also set up observation towers, lookouts, and walkways, giving access to breathtaking landscapes, often unsuspected. The club also has a mobile application called “Club VTT de La Matapédia,” which allows you to quickly locate the services and discover the region through photos, audio clips, and video.

What are the views not to be missed?

Each sector has its own distinctive panorama, where picturesque communities, mountains, and the sea follow one another. But among the unmissable viewpoints, we note the Chic-Chocs, the summit of Mont Saint-Pierre, the Percé rock, the Baie-des-Chaleurs, and the many observation towers of the Matapedia Valley, including one at the top of the Val-d’Irène Regional Park offering a 360-degree view of the surroundings. Also, be sure to stop at the Philomène waterfall in Saint-Alexandre-des-Lac, where a glass-floor platform overlooking the river has been built.

Do I need a reservation?

It is always best to make your reservations in advance, especially if you are traveling in July and August. On the Tourisme Gaspésie website, you will find several hotels easily accessible via the region’s trails.

Are there guide services?

Based in Carleton-sur-Mer, Authentique Gaspésie offers professional guide services for a few hours or several days. Equipment can also be rented there.

In Saint-Octave-de-l’Avenir, the Village Grande Nature Chic-Chocs offers quad rental and guide service for day trips or around the Gaspésie. The establishment also has a restaurant, accommodation in inns, cabins, camping, and a wide range of outdoor activities.

A maritime destination, the Gaspésie region is well known for its fresh fish and seafood. Caught from May to July, the live lobster is then kept in a tank. So you can enjoy it fresh all summer long, whether it’s whole at a table in a restaurant or as a club sandwich during a stop at the local canteen. Not to mention the many microbreweries and the brand new distilleries which will offer you delicious products for aperitifs.

Ready for a quad ride in Gaspésie? Plan your stay at tourisme-gaspesie.com and take a tour!