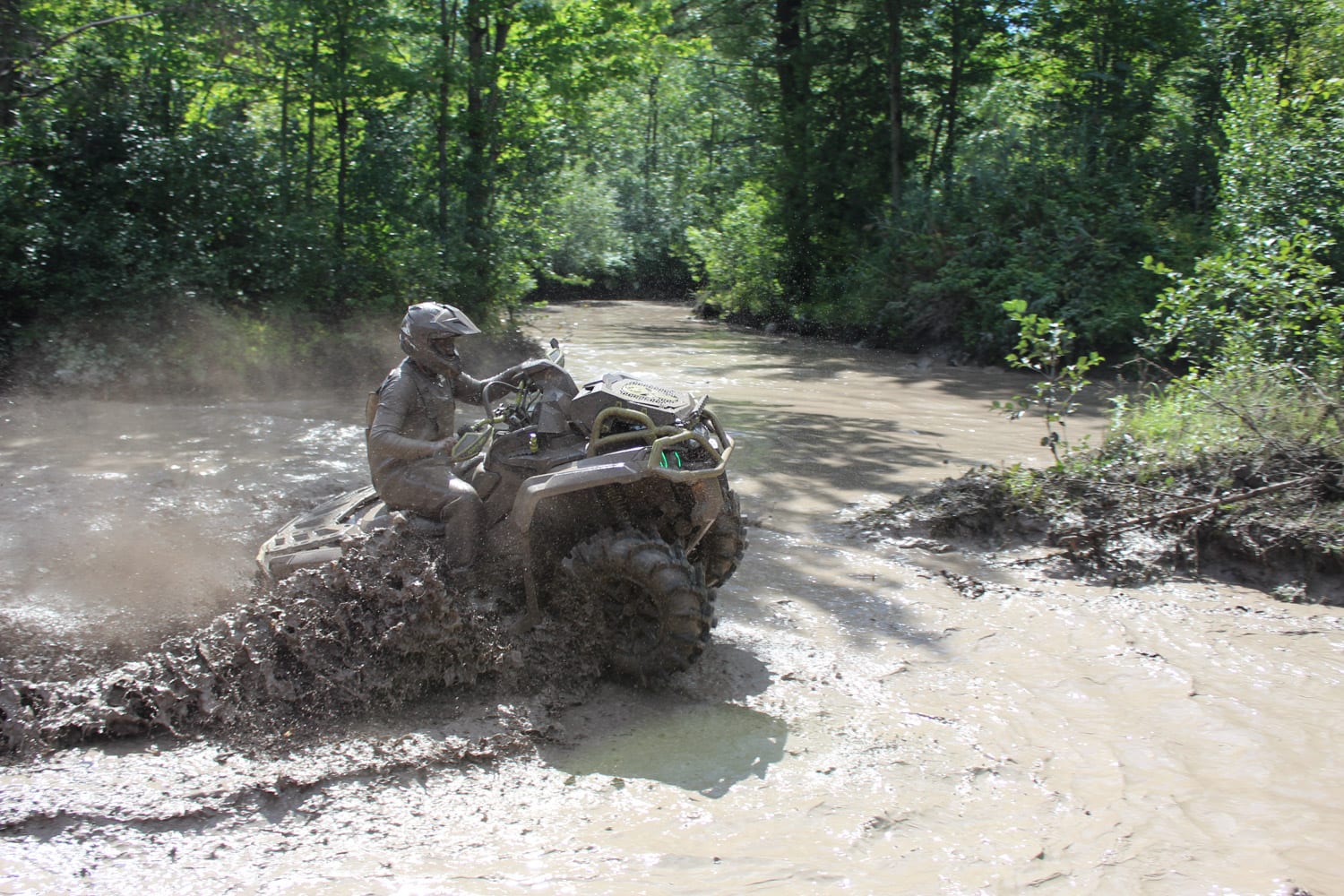 Recognition is defined by the feeling that prompts one to see oneself as accountable to others. The owner of Eskape.ca has grasped this concept and provides his customers with this great value of kindness. It is also a way of meeting them in a different context and forging solid bonds.

For 7 years now, Jimmy Bérard has been organizing a private event in the city of Granby, Québec, with the directors of Bouette Québec. The event is called Mudfest Eskape.ca. At the beginning of the adventure, the muddy buddies from Quebec tested the idea of creating a special event dedicated to the pleasure of playing in deep water and mud in a safe place. Jimmy, an experienced organizer of motorsports events, offered his services and, moreover, a place of several acres on family lands that would offer all the desired characteristics for such an event.

The event was originally organized for ATV and UTV enthusiasts; the first year had only 60 vehicles and this number went up to over 200 in 7 years. However, the objective was not to create a large-scale event like the ones happening in Texas for example. Mudfest Eskape.ca takes place in the small town of Granby every year since 2014, and it rather pretends to be a more family and friendly event. There were no bleachers on the premises, the space is completely dedicated to those who want to test the performance of their vehicle, no matter the engine size, modification, etc. For those who prefer a smooth ride, several kilometers of wooded trails are also available on-site to fulfill this desire for a peaceful ride.

The Mudfest Eskape.ca has hosted several known public figures in the past years such as Philippe Laprise from the popular TV show Histoires de Sentiers as well as the famous Monster Truck driver, Cynthia Gauthier. The latter also participated to the mud drag competitions, however, losing in the final against Nicolas Di Paolo who had never left her a small chance to catch up. This is proof of the growing interest in what is now considered as a key ATV event in Québec.

Making adjustments to the situation

Given the uncertain situation of the coronavirus pandemic, the organizers had to adapt to the requirements regarding the maximum number of 250 occupants on the site of the event. Unlike in previous years, registration had to be done exclusively online to control the number of participants. Distancing rules also had to be enforced for the smooth running of activities.

On that day of September 5, 2020, the visitors were expected very early, as the scheduled program started at 9h00 am. Several convoys were organized from different regions of the province to go to this annual meeting. A multitude of photos of ATVs loaded in trailers was even shared on Bouette Québec’s Facebook page the day before the event, showing everyone’s excitement.

The huge parking space allowed everyone to unload their equipment and some people even erected small marquees, as the weather was unpredictable at the beginning of the day. Despite the huge area, space was lacking and the latest visitors had to move to another portion of the Bérard property. However, smiles and joy were on the menu for this annual reunion. We also witnessed an interesting finding: a large majority of people present that day were wearing clothing bearing the logo of Bouette Québec to demonstrate their membership in this very popular group.

The first hour and a half was devoted to freestyle, where the ATV riders could test the playing environment. Afterward, the friendly acceleration races began in 2-3 feet of water and mud. Several different classes succeeded one another up to the ultimate class: the “ Open ” category. The latter allows vehicles with extreme modifications that can range from 3-inch deep paddle lug tires to nitrogen booster. It was quite a performance and the mud waves created by these extreme machines splashed the audience.

Subsequently, the ATV pilots demonstrated their skills during what is called “Water Wheeler” races. This discipline consists of an ATV race in which the pilots must keep the front wheels in the air to float above the water and acquire the necessary speed to complete the lap in first position.

By mid-afternoon, the audience was able to leave the muddy space for a drier spot to attend for drag races on a grassy surface. The first confrontations gave way to acceleration racing for kids. The pride of the parents was palpable to see their children performed in this race, and kids showed great daring in response to the encouragement of the large crowd.

The races followed one another with the presentation of different classes according to the engine sizes and types of vehicles. We had quite a show when the “Open ATV” category came up. The power deployed by these vehicles was phenomenal and we had to be at a respectable distance not to receive a projectile ejected by the rear tires of these mind-blowing ATVs.

Several UTV categories also participated in the show, leaving the room, in the beginning, for naturally aspirated motor vehicles followed by the grand finale demonstrating the skills of the pilots onboard their side by side vehicle equipped with turbo and other modifications, developing more than 200 hp in some cases.

Because of social distancing rules, the organizers had decided to hand over the rewards to the first three podiums in each category successively at the end of each race. These episodes created magical moments and the joy of each winner was obvious. Many pilots challenged each other for the following year, which helped maintain this great brotherhood among the competitors.

Some people mistakenly believe that most die-hard mud buffs are rebel dissenters in the ATV activity. On the contrary, they are not delinquents riding anywhere and breaking the law. They are rather followers aware of the established rules and who devote themselves to their activity within a well-organized framework. We had the privilege of meeting a family that is the typical model of what the new generation of ATV enthusiasts represents.

The Moffette family is a good example to demonstrate the change in mentality that is taking place. They humbly admit that they are proud of being part of Bouette Québec. The Moffette name is very familiar to many followers. Mélissa, Cédric’s big sister, is a well-known face in the ATV world in Québec because she has already served as president of ATV Club Les Randonneurs. Their father Maurice is also a big fan of this unifying activity.

Cédric and Marie-Pier are parents who are not stingy when it is time to encourage their kids and they give them everything they need to transmit this passion to them. With the Bouette Québec group, they continue to organize and participate in structured events. They also participate in setting up supervised structures to allow young people to develop and learn the basics of this great activity. Beyond the ATV, they are fathers and mothers who have concerns and who have developed a network of friends through the Bouette Québec group. It is probably the cornerstone that makes the success of this beautiful group and that makes them the most popular ATV group on Facebook in Quebec.

All good things have an end

The end of the day was the return home of each participant with their heads filled with beautiful memories. Everyone left exhausted, but with the feeling of duty accomplished. Once again the hosts delighted their guests during this Mudfest edition, and they are unanimous in meeting for an eighth edition. The Bérard family and the members of Bouette Québec put into practice great human values ​​that never go out of style!