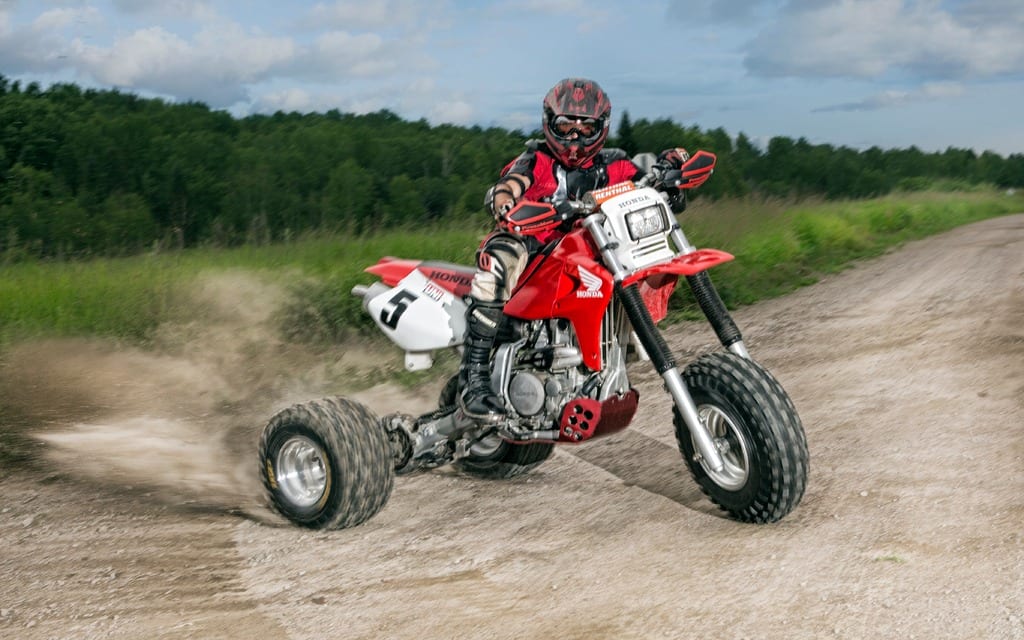 Honda XR 650R 3-Wheeler Conversion, Born December 25th, 1981, Mathieu Langevin-Paquet is truly passionate about off-road recreation. First and foremost he is passionate about photography but now also about restored sport 3-wheeler and motorcycle / ATC conversions and very good at them as you can see here. He grew up mostly in St-Félicien, in the beautiful Lac-St-Jean region. He says he had a dream childhood, in a beautiful town house surrounded by forest and beautiful trails. Not being a fan of school or sports, with undiagnosed ADHD (attention deficit hyperactivity disorder), to help kill time, he bought his first three-wheeler, a 1985 Honda ATC350X, back in 1999. He’s stayed a huge fan of this form of vehicle ever since but didn’t always have time for them.

Having one wheel in front to steer and two in the rear for power, reduces the cost of the steering mechanism, makes it feather light and precise to steer but greatly decreases lateral stability, even more so when cornering while braking. That is simply a trait, not a defect. These vehicles, like many others such as snowmobiles, watercrafts, motocross etc. ask for the mastering of a very specific technique to control them properly. In the case of a three-wheeled ATV, much like on a snowmobile, the rider leaning into turns avoids tipping. In fact the right technique involves a little more effort than that and the rider’s rear must move over towards the inside of the turn and down the side of the seat, while the foot on the outside of the turn leaves its peg left to dangle in the air, naturally. In my opinion 3-wheelers never deserved to get such a bad rap. To this day they still get unwarranted criticism from a lot of people. It seems that many people just thought these things were easier to ride than motocross bikes because they don’t lean, sort of like the same thing but with training wheels. Nothing could be further from the truth. Overconfidence in the machine caused its undoing. You need to learn the right technique for each vehicle. I remember my first time on a Jet Ski, you know those watercrafts that you stand up on and steer the opposite way that you would on a motorcycle. Man! Talk about tricky! It took a while for me to just be able to stand on it but with a few pointers from a pro, I was having a ball with it in no time. The same goes for 3-wheelers; if you have a good coach you can learn how to ride well in a day and then ride it safely for a lifetime.

Sadly many ATV riders only used to riding ATVs with four wheels, don’t use the bum sliding technique enough or not at all. It’s not something you only need to do at extremes; when you turn a little, you move to the side a little. Ideally this is done just prior to making the next turn. In my opinion a rider that knows how to ride a 3-wheeler well, will be a safer rider on four wheels. Three-wheelers and their lack of stability force you to use quick and generous weight transfers. Quads will only ask for it a tad later and so if not taught well, beginners can evolve into riders that stay put on the seat and just lean their upper body. The main point that I’m trying to get across here is that if you’re planning on going from 4 back onto 3 wheels, you better be ready to accept the fact that you are a total newbie all over again and need to take things very gradually.

For Mathieu, buying his ATC marked the beginning of a new life. He could finally take full advantage of the forest and escape after the long boring days of school. He would go crazy in the sand pits and on long hikes with or without friends; the important thing for him was to just be on his ATC. He tried the college thing, but school still did not interest him all that much. Years passed, and he forsook his 3-wheeler and his calm region and moved to the big city to pursue his first passion; photography. It was difficult times for artists back then, so he decided to leave the city towards western Canada to see some country and if possible make a fortune. So he worked on construction, with a big salary, big insurance, but very far from his life goals. He spent 5 years in the West, enough time to get a few free visits at the dentist and he returned to the city once again. In 2006 he took a photography class and realized it was his true calling. He then explored the fashion world as a model for various agencies, appeared in shows, photos, commercials, video clips, and played as an extra in some movies. He also worked as an assistant for a renowned photographer to see how it all went down. It was a world far from his quiet little Lac-St-Jean. One filled with alcohol, drugs and crazy schedules. In short, a world in which he was not comfortable at all. He questioned his life choices to a point where he found himself another job, stable this time, in an air exchangers manufacturing plant. This job was far from photography, but brought bread on the table. Having an understanding employer, he could occasionally miss days for photo shoots or film productions. He did this for 6 years, losing motivation month after month.

In 2013, he was burnt out. He could not stand life in the city anymore. He missed the life he had in the Lac St-Jean region. So he went back and managed to find a little job in the area, as well as a young lady who became his wife and mother to his son. They established in the city of St-Félicien and his wife helped him shift from odd jobs to pursue his career as a photographer. So he used his knowledge and ability to develop his own photography studio at home (Mathieu Langevin Photography). His return to Lac-St-Jean also meant a return to his ATV trail rider ways, on a 3-wheeler of course! Not wanting a conventional 3-wheel model this time around, he decided to create is very own vision of what a cool and fast ATC should be. His dream ride soon took form: a 2002 XR650R motorcycle, modified into the best-looking and fastest ATC we have ever seen! Nice job Mat!

Here are the steps for this amazing transformation:

Step 3: machining of a new shaft for the 350x wheel to be bolted on the XR650R’s “shocks”. Once the wheel is coupled with the shocks, it gives you the right measurements to continue to the next step, which is to have the upper clamps machined.

Step 4: machining of aluminum clamps, 3/4 thick, cut by laser, to a nice finish (to get the right angle in the clamps, he fabricated a wooden template).

Step 5: fixing the mounts for an Outlaw brand handlebar to his awesome-looking new clamps.

He strongly suggests keeping the top of the swing arm of the motorcycle, which is the main support portion of the suspension. He cut the XR650R’s swing arm to weld the other end of TRX450R swing arm.

Another little trick to lower the cost of the conversion was to sell the XR650R’s parts that were not needed like wheels, brakes, fenders, etc.

The passionate Mathieu was back on 3 wheels and at a peak of happiness! He then created a Facebook page to share this happiness with others, like him, passionate about 3-wheelers.

In keeping with his two current passions, first he’s planning to build another 3-wheel sport beast, this time with a 690cc KTM for his wife and he wants to restore a mini ATC for his son. Currently, he is working on a calendar project with 3-wheelers and pretty girls from the Lac-St-Jean region.

For those who would like to have more information about such conversions, we invite you to look Mathieu up through his Facebook page called:  ATC (3 roues) Modifiés.

We were so impressed with this guy’s great attitude, talent and ambitions, that we offered him a job as a collaborator here at ATV Trail Rider, to be our ears and eyes, way out east of this great big country. He gladly accepted and we can’t wait to see more from a region where ATVs are part of almost everyone’s daily lives.