A Factory Tour at Polaris Industries 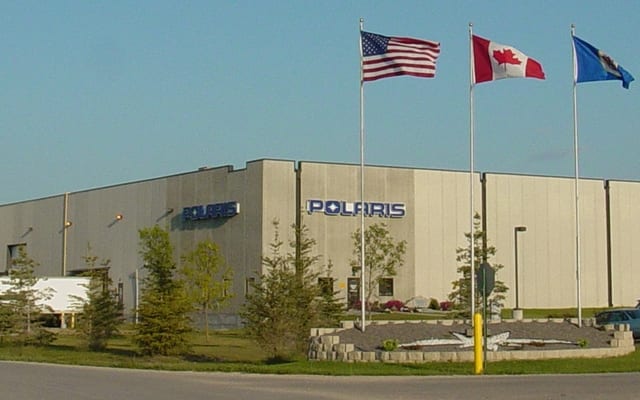 ATV Trail Rider magazine had the unique opportunity to take a tour at the original Polaris factory in Roseau, MN. Roseau is a small community close to the Canadian border just south of Winnipeg, Manitoba. The Polaris factory is the biggest part of this town, so finding the factory would be easy task for anyone passing through. We had an early start to our tour, but what made this tour unique was the tour guide, Janet Hetteen.  Janet is the granddaughter of Edgar Hetteen, one of the original founders of Polaris Industries.  She had a keen sense of everything and everyone in the plant. Certainly her exceptional knowledge gave this tour an exceptional twist.

A Walking Tour with Plenty to look At
The Roseau plant is a manufacturing and an assembly plant, meaning that they take stock material, bend, fold, and cut and weld parts together. Polaris continues the manufacturing process by powder-coating these parts; after these parts are properly cured, they go on a conveyer line to meet the destination of the assembly line. The Roseau plant is huge, they build: Snowmobiles, ATVs and their Side by Side ATV series called the Rangers, as well as the RZR Razor. Several of these Polaris products are produced all at the same time. During our tour, they were assembling the RZR Razor, the Hawkeye, the 800 Sportsman Touring and the RMK mountain climbing snowmobile.

The 800 Sportsman and the Hawkeye ATV assembly lines are running parallel to one another. The area is relatively short, (the length of a little more than a football field). You guessed it! The assembly line starts off with a bare frame. The first parts to be added to the bare frame were the braking system. Polaris takes their braking systems very seriously. The brake assemblies are put together in a clean, dust free room; the employees wear white suits to work on these assemblies in the clean room. All brake systems are bled and ready to go, when they leave this room.

These assemblies are hung on a cart and moved to the assembly line for installation).  The assembly line workers all work with attention to details. The steering system is added  The line continues with a modest and continuous pace, with people assembling parts from both sides. The new ATVs come together in an impressive, but short time. The installation of their Sportsman transmission is a heavy job.  The motor station has several components assembled prior to the engine being placed into the frame.  The wiring harness is installed and the connectors are snapped together with the engine’s wiring harness. It’s amazing to watch this process come together so quickly; basically they start in the centre of the frame and then work their way out. The inner clutch cover is installed, and then the primary, the secondary clutch and the belt are fitted to complete this part of the power train.  These photos show the Sportsman Clutches installed. The suspension is now complete and the outer brake parts are now installed, a perfect example of building from the centre out.

At this point on the line, the new vehicle has really come together. The gas tank is fitted, the shrouds and inner covers are all installed and the workers prepare for the finishing touches. Now for the crowning glory, the installation of the outer plastic, that is the finishing touch that gives this new ATV a finished look. This is a busy area with several people doing detail work, applying decals and last minute touches as the line is nearing the end. The tires are one of the last things to be installed. The line is high for easier installation and after the tires are mounted, the line moves down closer to the ground for further work.

The new ATVs are heading towards the testing facility, this is where all units are started for the first time and the engine is run up to speeds; this is where the electronics and brakes are tested. These are important steps. The ATVs go through a number of different tests, and these units are proven before the ATV units leave the factory. Those tests are to ensure all ATVs meet the Polaris high standards. From here, the ATVs go to the Crating Department, they are parked on this steel crate base for part of the crating process. This unit moves down the line where the crating process is continued, an upper frame is used for support. The ATV gets its hair net cover and then the entire box unit gets a shrink wrap to protect the new ATV during shipping, until it gets to the dealer.

Notice that Polaris uses a big bag that resembles a large hair net to keep the new machines spotless.

The Polaris Plastic Injection Plant
On this same site, just behind the main plant, Polaris has a newer facility that manufactures their plastic parts. This is where they make plastic parts for the ATV and snowmobile model lines. Inside this building there are cowls, hoods, shrouds, covers, etc., hanging up as samples in this facility. This factory is scary; there were only two people that we met during our afternoon tour. There are a lot of cranes and robots, but the bulk of this building is used for storage of all the different moulds and plastic bead material that are used for this manufacturing. When we got the injection machine, there was front ATV shroud being injected. The moulds were high polished and you could see yourself in the reflection. They also have the appearance of something you would see in a Terminator Movie.  These two halves came together and formed a seal, this is when the hot plastic was injected into the mould, when the two halves came apart; a robot’s arm came into the mould half and grabbed the newly formed plastic part for the new black Sportsman.

A Brief Polaris ATV History
In 1985, Polaris launched into the ATV market, with their four-wheeled Trail Boss and the three-wheeled Scrambler.  Later, in 1994, Polaris introduced their first 4-stroke ATV, the Magnum 425.  In 2000, this ATV manufacturer introduced youth ATVs, 2 years later they had the introduction of the Predator Sport ATV and one year after, they introduced the first electronically fuel-injected ATV, the Sportsman 700 EFI.

Today, Polaris is a major player in the ATV market and presently builds several different models in 6 different categories. Polaris has a wide range of models, from the mini youth ATV, the Predator 50, all the way to the premium Sportsman 850 XP ATV. There are a lot of different ATV models and there is something in the Polaris ATV line that will satisfy the needs for any off road enthusiast.