Elka Suspension – Profile of a builders 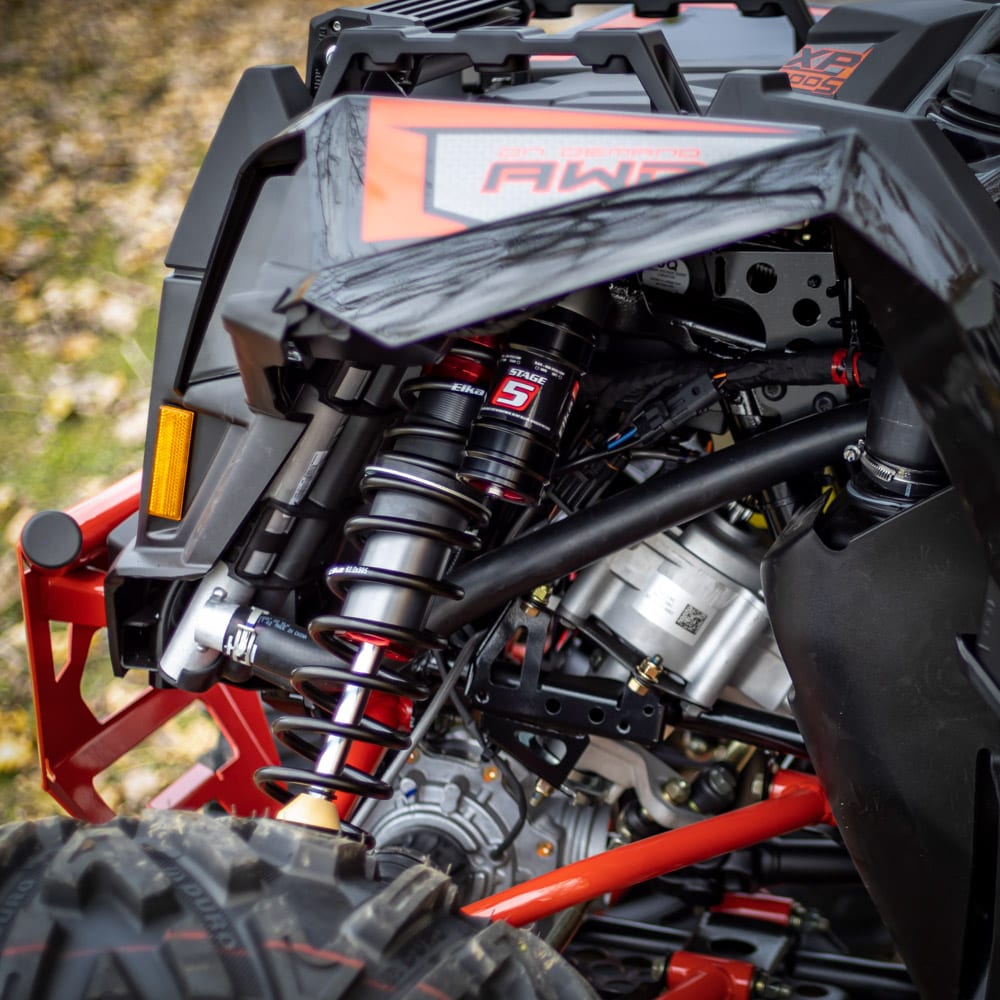 The Quebec company, ELKA Suspension, has at least one thing in common with Apple, Google, Amazon, and Bombardier. Their activity began in a garage in 2000, under the initial drive of three people, the brothers, Martin and Jean-François Lamoureux, and their partner Marc-André Kingsley.

ELKA Suspension is the haute couture of the shock absorber world, providing a suspension that is designed and built to the needs and use of the owner.

Martin Lamoureux is the president of the company based in Boucherville, on the South Shore of Montreal, in Quebec. The “About Us” page of the website could have been dedicated to him, but he did not want to put himself forward alone, because ELKA Suspension is a group effort according to him.

It is not the first time that Martin has refused this honor or individuality. He had already said the same thing ten years before. It truely has to be acknowledged that 20 years after the creation of the company, the three creators are still at their positions.

The original idea behind Elka was to improve ATV suspension used in competition or on trails. Quebec is widely known for serious ATV racing and the 2000s corresponded to very good racing years, with MX events like those organized by the CMRC, Courses VTT, the Montreal Supermotocross, and the famous enduro best known as the 12 Hours Endurance of La Tuque. And what about the American market? Elka is present there as well.

In 2002, Elka was the GNCC US champion with William Yokley. In 2003, it was essential to victory in the SCORE Baja and Best in the Desert series, with Doug Eichner and the official Honda US team. In 2002/2003/2004 it was with Doug Gust on the Suzuki USA team that Elka won the National MX championship three years running. Subsequently, in 2006, John Natalie won the same title with the American Honda team. Since then, a multitude of championships has been won each year on Elka shock absorbers in various disciplines such as SCORE Baja, Quad des Nations, WORCS from 2009 to 2019 and ATV-MX. This year again, pilot Ignacio Casale won the prestigious Dakar rally on Elka Stage 5 products. On the UTV side, Elka pilots won the famous Baja 1000 in Pro Stock class, as well as the King of the Hammers 2020 race with Can-Am pilot Hunter Miller.

OEM shock absorbers cannot always withstand the punishment of competition. Martin Lamoureux, himself an enduro rider, says he saw suspension systems fail on a regular basis. He had an idea to do something better.

The first mission of the company was to create reinforced shock absorbers systems that were adapted to the extreme use of competition and serious riders. To decrease the chance of melt downs, some have an external oil reservoir, the famous “piggyback.” The oil capacity is increased to lower the heating.

The primary philosophy was to avoid mass production. The product is not off-the-shelf but rather assembled on demand, according to the customer’s choices, taking into account the weight, the discipline, and many other parameters. This is still the case today for most models, but the line has diversified.

Through 2007, Elka Suspension grew with the ATV market. But the financial crisis of 2008 hit hard and sales dropped 50% in a year, following the curve of ATV sales. To survive, the number of Elka employees was substantially reduced at that time.

It is in turmoil like this that we see the real value of business leaders. Our three creators questioned themselves and diversified the product line, a project that was in the air even before 2008. Elka shock absorber systems are now developed for many other vehicles including snowmobiles, side-by-sides, the Spyder, and even trucks, like the F150, RAM, Tacoma, Chevrolet, and soon Jeep owners will discover the importance of good suspension, both off-road and on paved roads.

Special applications are also developed for the military and many other specific requests.

At the dawn of its twentieth anniversary, Elka Suspension has added new strings to its bow. It now employs more than 35 people, plus many subcontractors and consultants. 90% of its production is distributed for export, throughout North and South Americas, Europe, Australia, Russia. Through more than 1,000 points of sale, Elka shines the flags of Canada around the world!

The creators are two brothers and a friend who met on the South Shore of Montreal, thanks to the motorcycle of which they were all three fans.

Martin Lamoureux started to put his hands in the suspensions, responding to requests from friends and competitors who rubbed shoulders with him on circuits or trails. He is the president of Elka.

He was born in 1971 in Charlesbourg, Quebec, one of the six districts of Quebec city. His father was working in the electrical distribution and very quickly the family moved to Saint-Basile-le-Grand, on the south shore of Montreal. He rode his first motorcycle at 7 years old – a Suzuki RM80, and it’s a revelation. This would be his future life!

He began racing on a motorcycle, in Cross-Country, at the CMA at age 14, then at the FMSQ. He worked to finance all this. His education is more about life, with a job in agriculture that allows him to be close to nature. He also worked in his father’s electrical distribution business. All of this gave him the basics of business and entrepreneurship.

He began modifying suspensions in a small garage in Boucherville. At 28, the hobby will become an industry and human adventure. He is in charge of the competition and the market development sides of the business. The first USA victories excited him. He got involved early in the (now late) 12 Hours of La Tuque endurance to bring European or American teams with drivers like Romain Couprie, Dustin Nelson, David Haagsma, Beau Baron. He wanted to gain exposure in big events, like the Baja races or Le Touquet, so he brought in the American ATV media. Not to mention the great Canadians pilots, they are too numerous to list here. The La Tuque race was also a great test ground for Elka because the track was very impressive.

Martin Lamoureux made a comeback in competition at 33, on the Baja 1000 where he finished 3rd in motorcycle Pro category. He also participated in the Baja 500 and 250.

For his leisure time, he likes to retire to his land in St-Michel-des-Saints and ride motocross with his two children who are now 25 and 14 years old. His farmer’s side stands out, and he likes to grow fruits and vegetables.

At the end of the interview, I asked the question, “How come you are not OEM equipment?” The answer was immediate. “We want to be the leader in the aftermarket. It’s our DNA. We provide a more effective solution than the original, adapting it to the person and their use.”

Jean-François Lamoureux, Martin’s brother was born in Montreal, 3 years later. He lived in Saint-Basile-le-Grand and started motorcycling at the age of 7. Very close to his brother, he followed just about the same path with the school of life, modification of suspensions and enduro motorcycle riding. He took a course in farm business management. He professionally looked after his own orchard, which he sold to pay for his shares in the company. His position in the company is Vice President CPO, responsible for production and purchasing. Since 2008, he has been more focused on purchasing. At first, he was in charge of assembly. Thousands of shock absorbers passed through his hands. He took technical drawing courses and had to cope with the rapid growth of the business, which resulted in two expansion of the area of the premises in one and a half years of activity, and a move 5 years later.

He particularly remembers the launch of the Elka Stage 5, a more efficient shock absorber that required two years of development.

He enjoys motorcycling and ATV riding in Saint-Michel-des-Saints, with his 16-year-old daughter and his 13-year-old son. Outdoor life is one of his hobbies. His guilty pleasure is to handle the bulldozer and the hydraulic excavator.

Marc-André Kingsley, at 44, is the youngest of the three creators. He was born in Montreal and lived on the South Shore, in Ste-Julie and St-Bruno. At 10, he got on his first motorcycle, a Yamaha TY 250, and he was hooked.

He graduated as a carpenter, worked in the construction industry, and entered HEC where he learned finance, accounting mathematics and securities. He was employed as an investment advisor, but his passion was elsewhere.

His passion is riding a motorcycle, both on- and off-road. Even to go to work. His path naturally crosses that of the Lamoureux brothers, both on the tracks and in the garage. His banking experience allows him to find financial arrangements and help to start the company. Marc-André is Vice President of Operations at Elka. He also oversees internal sales and R&D.

For his leisure time, he likes to ride a motorcycle with his children 10 and 11 years old, who both started two-wheelers at 4 years old. His other hobbies are hunting and fishing. Deer hunting in the Eastern Townships and salmon fishing in Gaspésie and on the North Shore in the province of Quebec.

The three creators come together on their values. And on their vision of the company. Elka reached this level thanks to its team of employees. Some have worked there for more than fifteen years, it’s a tightly-knit team that supports each other. Elka’s strength is its constant innovative vision, its ability to find new markets and to make a significant improvement to the original suspension designs.