Doctor, is my suspension normal? 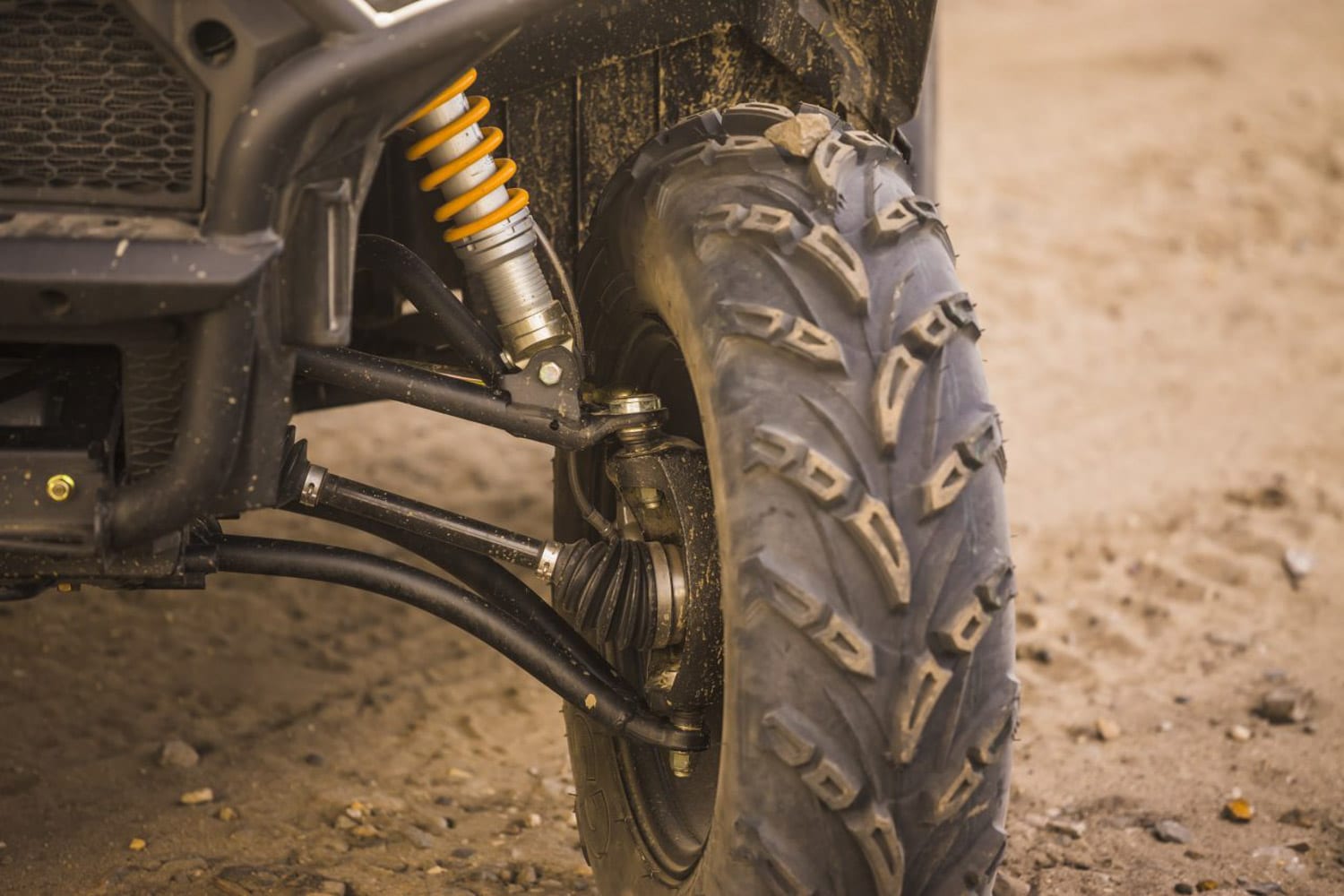 One of the biggest concerns when purchasing an off-road vehicle is its suspension. It is therefore essential to choose the quad equipped with a suspension that will meet your requirements. And when it comes to requirements, you have to assess what you want to do with the machine and consider the driving style and the types of terrain you will cross. But even with these precautions, maybe your quad is shaking you a little too much for your liking. You sometimes wonder how to adjust your suspension correctly. It is not always an easy task, and that’s what we’ll demystify. There may be a solution for your quad.

The first quads only benefited from the flexibility of the tires as a suspension. We bounced around so much on them that sometimes the driver would be ejected. Luckily, these vehicles were not riding fast. Then came the suspension on the front end, and it was quickly added to the rear axle. Fortunately, the industry has evolved from rigid axle suspension setups on the rear axle to a suspended differential, half wheel shafts, and suspension arm, resulting in today’s independent suspension.

So far, we are talking about the suspension setup, but there is one main player in its performance: the shock absorber. Shock absorber manufacturers have created some incredibly powerful ones for the quad market. Obviously, not all quads are equipped with the latest shock absorbers, probably because of the cost, but also because the most advanced shock absorber isn’t necessarily the right one for you. The manufacturer will usually choose a shock absorber adjusted to the popular vocation for which the vehicle was built.

The manufacturer of your quad will have to guide his choice in four possibilities. First, in its most straightforward design, there is the fixed hydraulic shock absorber. The second is the hydraulic shock absorber with adjustable preload. Third, there is the shock absorber equipped with a preload as well as a rebound control. Finally, the more sophisticated ones are equipped with the options of all the others and the possibility of high and low-speed compression control.

The shock absorber concept can be thought of as a bicycle tire pump. Instead of pumping air, the shock absorber pumps oil through a small, calibrated valve orifice that slows down the movement of the valve. In the case of a quad shock, it should be called a shock assembly instead, as it is mounted and assembled with a spring.

The first type of shock absorber is simply hydraulic. No adjustment is possible.

The hydraulic shock absorber is not just filled with oil. There is an amount of gas present which will naturally stand above the oil. The function of the gas is to allow the expansion of the oil when it warms up.

It will usually equip the quads of smaller formats. Its performance is limited.

The second shock will look a lot like the first type, except that you can partially adjust the spring preload. Adjustment is made by turning a five-step thumbwheel with a tool. Each step further compresses the spring, which increases its preload. No further adjustment is possible. It will perform fairly well on quads designed for touring. On the other hand, if you use your ATV intensely, the limit of the performance of the shock absorber will be quickly exceeded. This type of shock absorber is found on most utility 4X4 quads.

The preload adjustment is pretty straightforward. First, find the maximum travel of the suspension. Next, calculate 30% of this stroke. This result is the distance it should travel when the driver sits on the quad in the riding position with the vehicle stationary. Finally, increase or decrease the spring preload to get as close to the target as possible.

The third shock absorber type (gas shock absorber) has the preload option, except that a threaded section replaces the adjustment steps. It has an adjusting nut and a locking nut, which gives it more precision and amplitude to the adjustment. It is enhanced with an adjustment acting on the rebound as well as on the compression. You can recognize this type of shock visually by the adjustment knobs at their ends. This adjustment allows you to control the speed at which the shock absorber will compress and also when it is released.

These adjustments customize the effects of the shock absorber to the driver’s driving style. Like the previous shock absorber, it runs on oil and gas (nitrogen). However, the gas is separated from the oil by a pellet or inside a pocket. This design aims to prevent the gas from mixing with the oil and creating an emulsion in the oil during heavy use. This phenomenon makes the movement of the damper erratic as the bubbles pass through the damper valve hole.

The adjustment of this shock absorber is more complex. Begin with the preload adjustment using the same procedure as the adjustable five-step preload damper. Then, screw in the compression and rebound knobs until they stop. Then unscrew the knobs by ten notches. Currently, the shock is in a benchmark fit. From this adjustment, experiment on the same section of track by changing only one of the adjustments by five notches. Take notes of your preferences. This adjustment will require several tries to achieve the optimization. The perfect fit for you won’t be the ideal fit for another. Many factors come into play: the rider’s weight, riding style, speed depending on trail conditions, etc.

If you have a more aggressive ride, the benchmark fit will probably cause you to lose control of the quad when going through a series of bumps. That is because the wheels will take too long to regain contact with the ground. For more touristy ride enthusiasts, the benchmark fit will likely give you a backlash when going over bumps. However, relaxing the settings will make the shock softer.

A final type of adjustment exists for shock absorbers: slow and fast adjustment. Still in progress, this shock absorber is mainly intended for competition. There are two additional adjustments. They consist of varying the shock absorber reaction depending on whether the compression of the latter is fast or slow. So a pilot landing from a jump may benefit from firm compression, while when passing a more technical obstacle, he will benefit from softer cushioning. When properly adjusted, the rider will have a clear advantage in the control of his machine.

It may seem exciting to get brand new shocks, but disappointment may quickly arise during the test. First, your quad must be equipped with the shock absorber that corresponds to your driving. If the ATV still refuses to be dominated after these adjustments, it is possible to get shocks from manufacturers such as Elka, Ohlins, Kimpex, or others. They are often classified in order of stage. The lowest stage is touring, and the highest and most expensive being the competition. Some manufacturers will go so far as to build custom shocks from a few questions about the rider’s weight, the tires of the quad, the riding style, and the primary use of the machine.

In conclusion, if riding your ATV is like a wild horse session, an adjustment may be necessary before you start buying new shocks. But the option of improving your ride with better performance shocks is always possible. Expect spending from $ 1,250 to $ 4,750 for a set of four shocks.