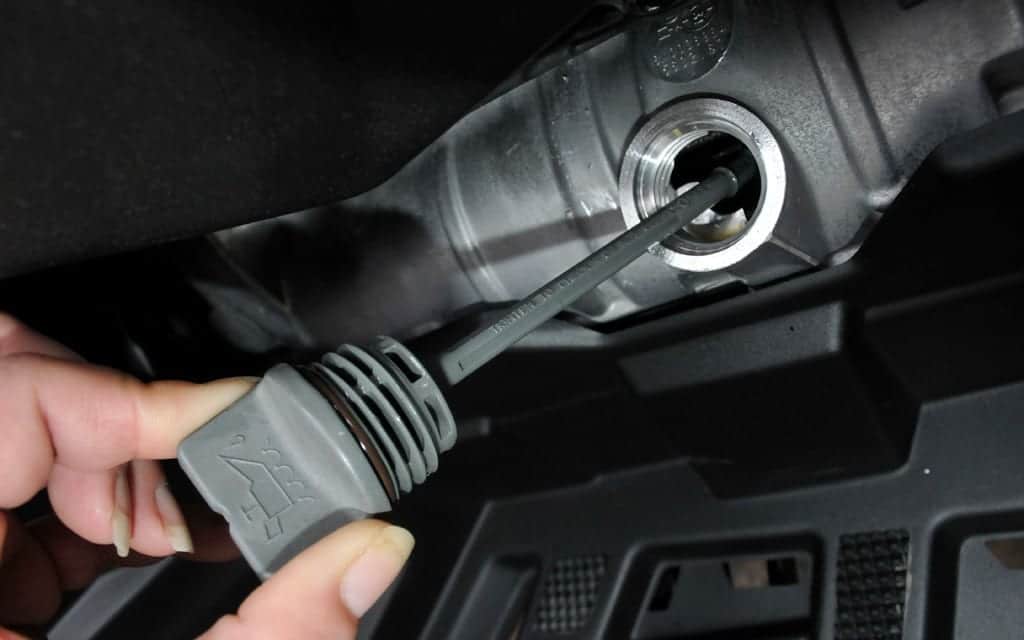 Choosing the right motor oil is a lot like standing in front of the drink cooler at the convenience store – there are a lot of choices and not a lot of directions on what are the right ones or wrong ones. Or, for that matter, if there even are right or wrong ones. We don’t know about soft drinks, but when it comes to oil there definitely are right and wrong choices and a little knowledge can help you choose the correct one for your ATV or UTV.

What Are Synthetics And Why Are They Better?
When it comes to oil, synthetics are the better choice. But it’s also good to understand what synthetic oil is and what makes it better. Whether oil is classified as synthetic, semi-synthetic or mineral is determined by the base stock.

The first glass is filled with the exact same marbles; these marbles are smooth, of the same size and are looking identical. Those marbles have same molecular structure and have been produced for a specific engine need; this would symbolize synthetic oil. The next glass has a few of the same synthetic marbles, but the majority of these marbles are of different sizes and there are some various stones with rough edges in there as well. For the most part the glass is filled with the same approximate size of marbles, but the molecular structures vary from marble to marble. This oil blend has generic blend and would symbolize a mineral oil. The third glass is filled with semi-synthetic oil and is a mixture of the first and second glasses, both visually and what you would expect from semi-synthetic oil blend. It’s good to remember that all oil is developed, sorted and refined to become, better oil.

When you buy a bottle of oil, the bulk of its contents are the base stock. Let’s talk 4-stroke oil, a typical bottle of oil contains about three-quarters base stock and the rest is typically a viscosity modifier and various additives. There are a variety of different levels and qualities of synthetic base stocks, with no easy way for a consumer to know which one they are getting. However, synthetic base stocks do have a clear advantage. Synthetic base stocks go through chemical processes that create consistent molecules – resulting in a product that provides consistently better performance.

Oil is Oil, Right?
You may ask, “Why can’t I just use car oil in my 4-stroke ATV/UTV? It’s the same thing, right?” The answer, in short, is no. The ATV/UTV oil “environment” is far more severe than that of an automobile. ATV/UTVs run hotter and at higher RPMs. They have a lower oil volume and many use a common sump for the engine, clutch and transmission. This harsh, multi-faceted environment means the oil has to do more jobs across a broader range of conditions than any automotive oil.

The additive package is what makes an oil “work” and, because of these more severe and demanding conditions, ATV/UTV demands a vastly different set of additives than your car or truck does. Typically, ATV/UTV oils are formulated to help prevent rust and corrosion from happening inside the engine. ATV/UTV engines that are run for repeated short periods of time or sit for extended periods make for a perfect breeding ground for rust and corrosion, since this type of operation results in condensation. Automotive engines run every day for extended periods, so their oils don’t need to address rust or corrosion. Also, some additives found in automotive oils that are designed to improve fuel economy can lead to clutch slippage, and lower viscosity automotive oils can cause increased gear pitting and oil consumption.

Viscosity is a measure of oil’s resistance to flow and ATV/UTV vehicle engines work best with unique viscosity measurements not found in automotive oils and one that can only be achieved in ATV/UTV applications by using a viscosity modifier. Traditional automotive motor oils are usually 10W-30 or 5W-20 viscosity; however, Polaris for instance, uses a 5W-50 viscosity for their off-road engines. Why? Polaris engineers found their engines needed this wide range to provide proper protection and starting in cold conditions, while also providing needed extreme high temperature protection.

Other OEM’s ATV/UTV oils range from 0W-40 to 10W-40, depending on what the engineers have determined the best viscosity for their engines. ATV/UTV engine oils need to flow in extremely cold temperatures so that plow-equipped vehicle gets enough lubricant on startup on a cold winter morning. On the other end, ATV/UTV oils need high shear stabilité, so they don’t break down under extremely hot temperatures such as when you’re pulling a load of hay on the farm in mid-August. It’s viscosity modifier that allows the ATV/UTV oil to work across this broad range of conditions. Since most cars get regular oil changes, automotive oils are not formulated to maintain stable viscosity or shear stability over long periods of time.  ATVs and UTVs demand oil that remains stable, so when you go to use it six months after an oil change, the oil works the same as it did when it was poured in.

To answer the question more bluntly, using automotive oils can eventually damage an ATV/UTV engine/clutch/transmission or, in some extreme cases, even eventually lead to catastrophic failure and an expensive repair bill.

Making a Choice
So, you’re still standing in front of your ATV/UTV’s “drink cooler,” trying to decide what oil to choose. We’ll try to make it easy for you. Traditionally, OEM oils have been seen as more expensive than some of the aftermarket brands, and at times that’s still the case. But in other cases they have been surpassed in price by “premium” aftermarket brands. One thing to keep in mind is an aftermarket brand, in worst case scenario, is the same formula used in that companies automotive applications or, at best, one designed to work across a broad spectrum of vehicle types, so the same oil that has to work in a Polaris RZR XP has to also work in a Honda Rancher, two totally different machines. At a recent event this author talked to a chemist from an OEM oil manufacturer and he gave me a quick course of the in-depth chemical, dyno and field-testing OEM lubricants need to go through, to ensure they provide the best performance and protection in all conditions, in all of OEM’s engines. He drove his point home when he said independent oil manufacturers don’t have to worry about warranty issues due to oil related failures, but that is a stark reality in the world of the OEM. This is exactly why companies such as: Polaris, Arctic Cat, Yamaha, BRP and others spend so much money testing and formulating oils to work specifically for their products. With price difference being marginal and OEM products specialized to work as a package, using the OEM oil is the safest and best choice.

Whether it is oil for 2-stroke or 4-srtoke engines, the OEM engineers dictate what their engines will need in the oil package. There are special considerations made for the modern fuel injection systems. After going through a barrage of testing, engine Dyno testing, there is still a host of field testing, done to make sure that the oil package meets all the needs required for the particular engine. After meeting all the different needs, this is when the OEM engineers will sign off or approve the oil designed package. No other oil on the market goes through this type of testing, there isn’t any even close.