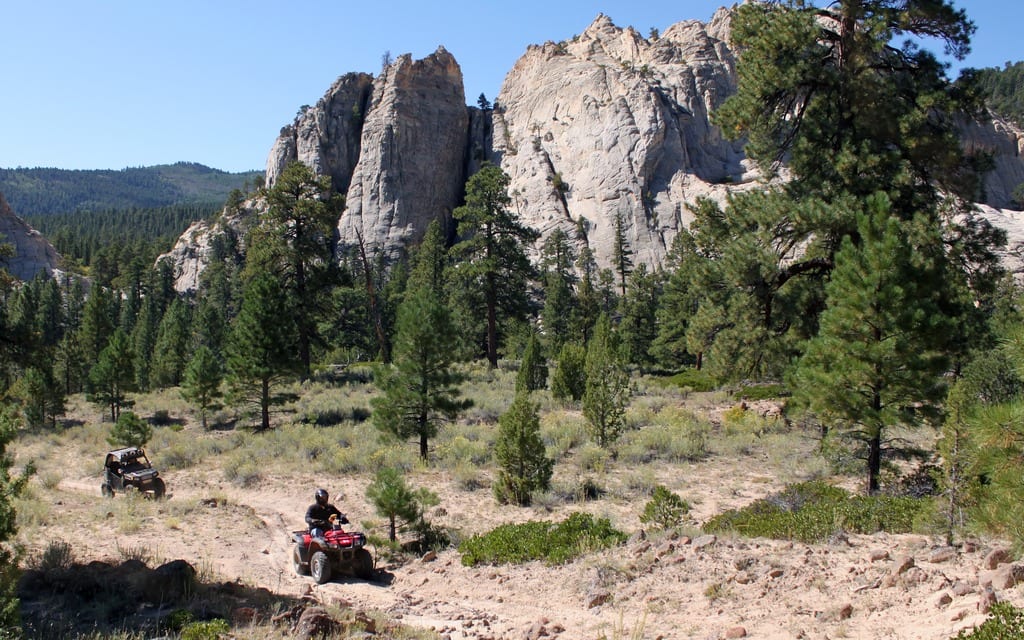 A few years ago, our chief editor Alain Assad was invited by a prominent ATV manufacturer to visit an awe-inspiring site and try out the ATV trails bordering Bryce Canyon National Park, in Utah, USA. Alain was so impressed by the wonders of nature present in this region and the hospitality demonstrated by his hosts at Ruby’s Inn, that he asked us to produce an article on this exceptional area.

BRYCE CANYON NATIONAL PARK
Bryce Canyon National Park is situated in southwestern Utah, in the United States. Bryce Canyon, despite its name, is not a canyon, but an assortment of giant natural amphitheaters bordering the eastern side of the Paunsaugunt Plateau. In geological terms, the plateau was created approximately 10-20 million years ago by an uplift of the larger Colorado Plateau. The uplifting brought on the formation of joints along the side of the plateau. Subsequent erosive forces, mostly along the eastern side of Bryce Canyon National Park, have created strange rock formations called hoodoos, which are the hallmark of the park, attracting more than 1.5 million visitors each year.

The formations exposed in the area of the park are part of the Grand Staircase. The oldest members of this supersequence of rock units are exposed in the Grand Canyon, the intermediate ones in Zion National Park, and its youngest parts are laid bare in the Bryce Canyon area.

This is the land of hoodoos. A geological structure known by the name of hoodoo (also called earth pyramid, tent rock and fairy chimney) is a thin spire of rock emerging from the bottom of an arid desert basin or Badland. Hoodoos vary in height between 4.9 and 147.6 feet (1,5 to 45 metres), or from the size of an average human to heights surpassing a ten-story building. They are typically made of relatively soft rock with a covering on top of harder stone more resistant to erosion, protecting each column from the elements. Hoodoos grow mainly in the desert and differ from spires or pinnacles because of their shape of variable thickness, often referred to as a totem pole shaped body.. Their shapes are the result of erosional patterns of alternating hard and soft rock layers. Different colours of red, orange and white in the structures come from minerals present in the different rock types.

More than 400 native plant species live in the Park. The forests and meadows of Bryce Canyon provide the habitat to support diverse animal life, from birds and small mammals to foxes and occasional bobcats, cougars, and black bears. Mule deer is the most common large mammal in the park. Elk and pronghorn, which have been reintroduced nearby, sometimes venture into the Park.

While motorized vehicles are not allowed to ride on trails within Bryce Canyon National Park, significant trails have been developed for ATV riding in the nearby national forest. These trails take you through unique formations and terrain that offer incredible views of Bryce’s red rock formations.

There are miles of ATV trails in Red Canyon, in addition to numerous new trails in the Bryce Canyon Region.

Bryce Canyon National Park holds some of the best scenic beauty in all of the western United States and some of the best overlooks can only be reached by taking dirt roads. Why miss out on seeing all of this magnificent canyon and all of its hidden gems? If you truly want an experience of a lifetime in Bryce Canyon, profit from the experience of Bryce Canyon Jeep and ATV tour companies. These roads are mainly for 4×4 vehicles and even if four-wheel drive may not be required, it’s a great idea. There are ponderosa pine forests, sand dunes, creeks, and viewpoints that are held by the locals as secrets. If you have interest in seeing these remote locations with a very knowledgeable guide please take a look at the options available.

ABOUT RUBY’S INN
For nearly 100 years, Ruby’s Inn has been welcoming guests to experience the breathtaking beauty of Utah’s Bryce Canyon National Park. For those seeking adventure, Ruby’s Inn is the perfect home base for exploring the red rock paradise.

Ruby’s Inn is located on the doorstep of Bryce Canyon and offers the closest available lodging to the park, with everything from luxury hotel suites to RV parks and campgrounds. For ATV riders, Ruby’s Inn offers the convenience of connecting to hundreds of miles of trails directly from the resort’s property.

“The access to trails is unbelievable,” says Lance Syrett, general manager of Ruby’s Inn. “Quad-riders can head out in any direction and explore several elevation zones and world-famous wilderness areas.”

“The best way to describe it is a forest of stone,” Syrett says of Bryce Canyon. “And with an ATV, the area around Ruby’s Inn is basically a scenic playground with exclusive overlooks.”

One advantage to ATV riding from Ruby’s Inn is the access to the hotel’s private property that borders the National Park. For example, guests with their own machines are able to join guided tours—free of charge—and travel through secluded ponderosa pine forests to the north rim of Bryce Canyon National Park.

For those without their own ATV, Ruby’s Inn offers a variety of machines to rent for use on guided tours that range in length from half hour to a full hour. One popular choice is the special sunset ride to watch the sunset over Bryce Canyon—a time when the sun’s orange glow illuminates the towering rocks.

Also, Ruby’s Inn provides guests with a large collection of free printed maps of the region’s ATV trails. Each ATV trail is numbered, making the maps easy to understand. In the winter, the trails are groomed for cross-country skiing.

“After a century of providing unforgettable memories for our guests, we’ve perfected the art of combining scenery, relaxation and adventure,” said Jean Seiler, director of marketing for Ruby’s Inn. “That’s why we make our ATV trails such a priority.”

In addition to Bryce Canyon, nearby attractions include the white sandstone domes of Capitol Reef National Park, the layered plateaus of the Grand Staircase-Escalante National Monument, and the tall chimney rocks of Kodachrome Basin State Park.

ATV enthusiasts will also enjoy the Dixie National Forest and its stunning Red Canyon; the Escalante Petrified Forest and its thousands of pieces of petrified wood, calcified fossils and dinosaur bones; and Panguitch Lake with some of the largest rainbow trout in Utah.

“We always hear from our visitors that they wish they had set aside more days to explore everything this beautiful area has to offer,” says Falyn Owens, executive director of the tourism office for Bryce Canyon Country. “From epic landscapes to endless recreation, Bryce Canyon Country provides something for everyone.”

Some of the more scenic trails in the area include:

Casto Cannyon Trail
The Casto Canyon trail takes riders through a virtual rainbow of red hoodoos, white, pink, purple and green colored sandstone cliffs. After making its way through the ever present red rock formations of the lower land, trail riders will find themselves in a forested section filled with green pine trees and meadows with multi-colored flowers.

Freemont Trail
To get to the Freemont Trailhead, turn south on the East Fork Rd (# 087) off Highway 12. Riders can then travel the more than 50 miles of trails that run from Tropic Reservoir to Paunsaugunt Plateau and over to Circleville.

Paunsaugunt Trail
View the Pink Cliffs of Grand Staircase-Escalante National Monument, travel to the Kaibab Plateau in northern Arizona and greet riders along the many Paunsaugunt ATV Trails. The trail begins at Tropic Reservoir and offers several loops through this scenic area. The loop trails along the Paunsaugunt Trail range between 20 and 75 miles in length.

Poison Creek Trail
Located in the Escalante District of the Dixie National Forest, the Poison Creek Trail will take ATV adventurers though southern Utah ‘s most scenic country. Riders will travel along dry riverbeds to desert forests thick with Juniper and Pinion Pine trees. The trail leads up the hills through Quaking Aspen trees to Poison Creek Reservoir, which locals refer to as “the pond” before making its way back down the canyon.

Happy trails to all ATV adventurers.

P.S. Our thanks to the friendly people at Ruby’s Inn and to Ladd Egan, Director of Public Relations at Sorenson Advertising for their collaboration and the awesome photos.