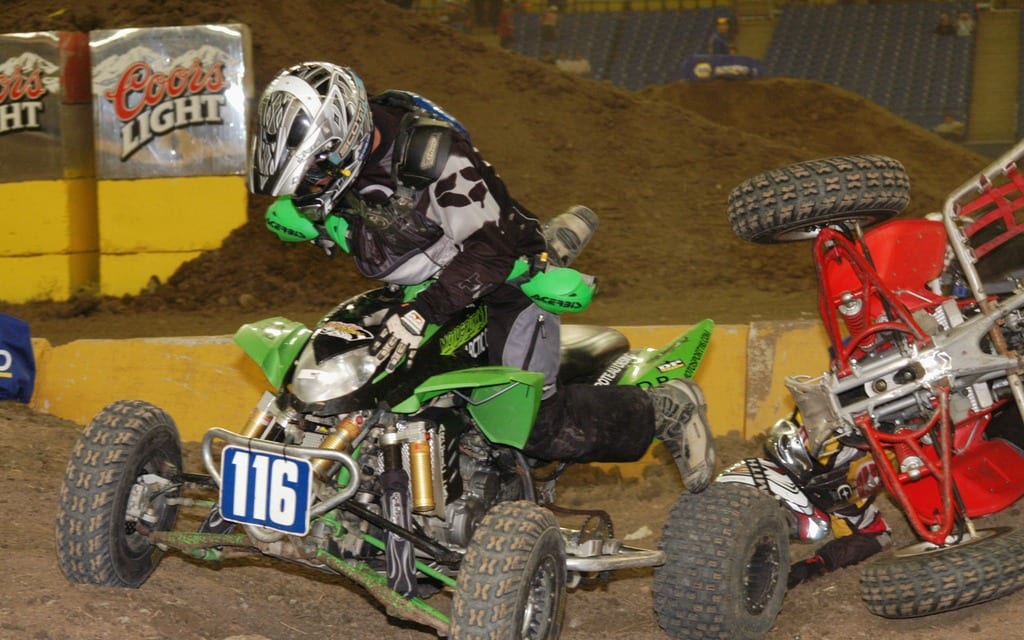 Head injuries are dangerous. They can lead to permanent disability, mental impairment, and even death. To most people, head injuries are considered an acceptable risk when engaging in sports and other types of recreational activities. But there are steps you can take to lower the risk and protect yourself and your children

In 2008, activities such as cycling, football, basketball, baseball and softball, and then in 5th place riding powered recreational vehicles, resulted in the highest number of head injuries for all ages.

According to the Brain Injury Association of America, the five leading activities responsible for concussions in children and adolescents aged 5 to 18 years of age are: cycling, football, basketball, playground activities and soccer. Concussions are the most common type of sports-related brain injury with an estimated 1.6 million to 3.8 million sports-related concussions per year.

Concussions range from mild to severe. The effects may be apparent immediately, or they may not show up until hours or even days later. Call 911 if a person has any of the following symptoms: blood or clear fluids coming from the ears or nose, slurred speech, unconsciousness, confusion, dizziness, or drowsiness, unequal pupil size or blurred or double vision. Unless the airway is blocked, do not move the person until a medical team arrives and checks for a spinal cord injury.

Most head trauma involves injuries that are minor and don’t require specialized attention or hospitalization. However, even minor injuries may cause persistent chronic symptoms, such as headache or difficulty concentrating, and you may need to take some time away from many normal activities to get enough rest to ensure complete recovery.

It is estimated that thousands of Canadians incur a traumatic brain injury each year the majority being young adults. They will have a normal life expectancy but will require special care. A majority of bicyclists who die each year die of brain injuries. Wearing a helmet can prevent most of the serious brain injuries. Brain injury affects a significant number of people each year and the numbers are reaching epidemic proportions. Statistics indicate that the incidence of brain injury is two times greater in men.

Since brain injuries occur in different areas of the brain with varying degrees of severity, no two people will be affected in the same way. An injury to the brain may affect a person in several ways including his personality, thinking, communication, or mobility. Some of the more common effects of a brain injury are changes in memory, concentration, response time, planning and problem solving, initiative, flexibility, insight, impulsivity, control of anger, talking, behaviour, dependence, emotional stability, depression. Post concussion syndrome is a terrible thing to go through as well and severely affects your ability to work and function.

A concussion causes an alteration of a person’s mental status and can disrupt the normal functioning of the brain. Multiple concussions can have a long-lasting, cumulative life-changing effect. A concussion is a type of traumatic brain injury (TBI) that happens when the brain is jarred or shaken hard enough to bounce against the skull. This can happen when two athletes collide or when someone falls and hits his or her head. It can also result from being hit in the head with a piece of sporting equipment.

Canadian Motor Vehicle Traffic Collision Statistics for 2003 indicate that there were 222,260 victims. Detailed statistics on the number of neurological disease, disorders and injuries are not readily available and require more research.

USE YOUR HEAD
It is ill advised to entirely neglect wearing a helmet because of your good intentions or promise to ride slowly. Most times I’ve seen people ride ATVs or in Side-by-side vehicles without helmets, they do, maybe not constantly but in many instances, expose themselves to high-risk despite their supposedly slow or moderate speed. In a tight turn, one little branch that rolls, a wet plastic bag, an ounce of sand on a flat rock, a few wet leaves or a front tire blowout – any one of these things and many others can affect the ride in a tricky to control way, that can end up being the reason why any number of things could hit your head or that of a passenger. It could be from slamming down to the ground in a rollover, from hitting a tree because the trajectory was slightly changed. Nobody goes out there planning to fall off his or her vehicle or have a tip over. Helmets are just one more way of helping you prevent injury.

Alberta is the only jurisdiction in Canada that doesn’t have ATV helmet legislation. ATV helmet legislation across Canada varies, with Saskatchewan exempting users from donning helmets and eye protection on land owned by an immediate family member, while other provinces mandate ATV users complete a safety course and wear a helmet no matter where they are riding.

In 2008, the Alberta government considered pursuing mandatory helmet legislation, but the bill never saw the inside of the legislature.

As motorized vehicles, off-road vehicles can be especially dangerous when used by children, young adolescents or adults, who lack the knowledge, physical size, strength, and cognitive and motor skills to operate them safely. The magnitude of injury risk to riders is reflected in explicit vehicle manual warnings and the warning labels on current models, it is imperative to take these seriously.

Helmet use is estimated to prevent 37% of fatalities among motorcycle operators and 41% of fatalities among passengers. In the U.S., the National Highway Traffic Safety Administration (NHTSA) estimates that in 2010, helmet use saved the lives of 1,544 motorcyclists, and an additional 709 lives might have been saved if all motorcyclists had worn helmets (NHTSA, unpublished data, 2012).

AN ANGLE TO CONSIDER
Research on helmet performance specific to off-road vehicle operation is a bit hard to find but extensive research has been done on the safety of motorcycle helmets. The most famous study of all, the Hurt Study Motorcycle Accident Cause Factors and Identification of Countermeasures, shows no question that a helmet protects the head, reducing injury severity. The main question that researchers want to answer is whether the likelihood of neck injury is more significant than the likelihood of a helmet saving the rider’s life.

Dr. Jonathan P. Goldstein, Ph.D., also used the same data that was used in the Hurt Report, in another paper. His analysis showed some facts that the Hurt Report overlooked. Although the data showed that motorcycle riders wearing helmets suffer from fewer head injuries, it failed to elaborate on what that really means. Helmet use had little significance in saving lives given that an accident had occurred. What does that mean? It means that helmets rarely save those who do crash. Their head injuries are less severe, but they die anyway. In accidents where the rider died, it made no difference if the rider wore a helmet or not. That’s not exactly a rock solid argument in favour of helmet wearing. The truth is that speeding and alcohol use are the biggest cause of motorcycle crashes. Those taking part in these risky behaviours are less likely to wear helmets in the first place. Helmet wearers tend to have fewer crashes and less severe head injuries because they take fewer risks. This accounts for the reduced number of fatalities among helmet wearers.

In light of the shaky evidence in favour of helmets, we must look at the evidence against them. Although motorcycle helmets protect the head, they tend to do so at the expense of the neck. The Hurt Report concluded that neck injuries were lessened by helmet use. How is it that Dr. Goldstein came to the opposite conclusion? Why does he say that helmets can lead to moderate or even severe neck injuries for the rider wearing the helmet? The reason for the discrepancy is not clear.

Riders report that the weight, shape and composition of the helmet all put undue force on the neck. The physics of the helmet itself can cause neck fractures during a crash. This makes Dr. Goldstein’s findings more in line with the real world experiences of many riders.

The speed of the helmet striking the ground makes a difference in the occurrence of neck injury. Statistics show that a helmet has to be moving at least 17 mph in order to cause a significant injury. Since most motorcycle accidents happen at just over 20 mph, there is a good chance that the helmet can cause neck damage in most accidents. Thicker helmets can cause more severe neck damage than thinner helmets because they are heavier and bounce back harder than the lighter helmets. Add to that the fact that even the best helmets are only rated up to 13 mph and a serious question becomes apparent. Is a helmet strong enough protection to make up for the increased risk of neck injury?

MIPS TO THE RESCUE
MIPS, which stands for Multi-directional Impact Protection System, a leading slip-plane technology inside the helmet designed to reduce rotational forces that can result from certain impacts, sets a new standard in helmet safety. Developed by brain surgeons and scientists to reduce rotational forces on the brain caused by angled impacts to the head. MIPS. Adding a low-friction layer, which provides an essential slip-plane, like the brain’s own way to protect itself.

In 1997 Swedish neurosurgeon Hans von Holst began to study helmet construction. He partnered with Peter Halldin, researcher at the Royal Institute of Technology, with a goal to contribute to the evolution of helmet technology. As a result, the company named MIPS AB, was founded in 2001 by Hans, Peter and 3 other specialists in the biomechanical field from the Royal Institute of Technology (KTH) in Stockholm, Sweden. The company has extensive technological and medical expertise focused on head injuries. They also conduct studies involving injury prediction and the simulation of head and neck injuries using advanced data methods. MIPS AB has extensive and profound knowledge concerning head and neck injuries, a result of 30 years’ experience in the area.

Barring a helmet law, helmet use is a personal choice. Statistics show that if you are a responsible rider, you probably are wearing a helmet. Whether that helmet will save your life is anyone’s guess. Whether it will instead cause a debilitating neck injury cannot be known. One thing is certain; a MIPS equipped helmet is the absolute best option, for any outdoor sport enthusiast.

All this being said, the most important thing is to follow all safety guidelines and avoid crashing all together. That is more likely to save you from serious head injury than your still indispensable safety gear.