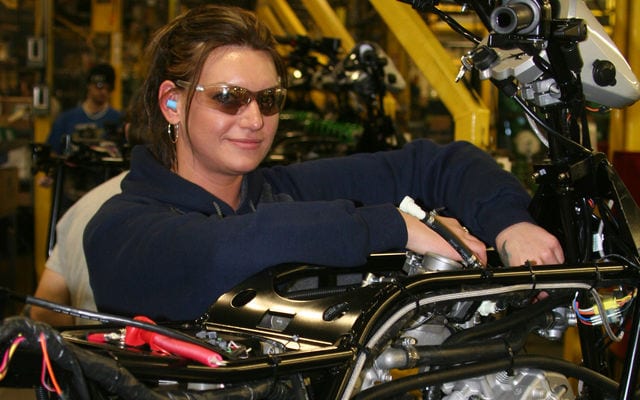 If there is one company bent on maximum performance from every product that rolls out its doors, it is Arctic Cat. Whether it is ATVs, snowmobiles, or one of our favourite side-by-sides, the do-it-all Prowler, the ‘Cat crew simply can’t get enough performance. In that way, they’re exactly like us and most ATV enthusiasts we know, who ask their ATVs to conquer unexplored terrain, pull heavy loads, or slog their way through muddy trails that would have been impossible by any other means. After meeting most of the engineering, management and assembly team members, they seem more like our riding buddies, and probably yours as well. They love their toys as much as we do! Recently we were lucky enough to be offered a tour of the Arctic Cat plant. We jumped all over it.

To the Red River Valley
The Arctic Cat main assembly plant is located far up in the northwest corner of Minnesota, in the small community of Thief River Falls. Located only a short ride from the border, the nearest major town is either Winnipeg, Alberta, or Minneapolis, but out in the flat farming country where the fields and sky blend together over snow covered fields, the air is crisp, clean, and the whole area has that quaint, rural feel. No doubt it’s a community that still maintains a solid work ethic, and judging by the size of the enormous factory buildings, which rise impressively from the expansive prairie, it must take a lot of the town’s residents just to keep it operating. There’s little doubt about the favourite brand in town, and even the local watering hole across the street from the plant, The Black Cat, is a de-facto museum of ‘Cat memorabilia from days gone by.

Factory tours are always interesting, and we never get tired of seeing how things are made, everything from ATVs to airplanes. There is something special about starting with a piece of raw material, and a short while later having a finished product in hand. At the Arctic Cat plant, most processes are controlled under their own roof, although like any other manufacturing entity, they also rely on highly skilled suppliers for some components as well.

One thing Arctic Cat has been moving towards in recent years is building more of their engines in house, and that includes the all-new ATV engines. Arctic Cat has a very sophisticated small engine facility. All the parts are sent to the engine plant as a kit, or “build order”. Each kit is pre-packaged, with each part in its own spot, and as a part is used, a computer system records that it was removed from the tray and then checks for installation. If it was removed, but not installed or installed incorrectly, everything shuts down until it is corrected. As each engine marches along through assembly line, data is constantly fed to the computer system, which even records bolt torque specs. Once assembled, the engines are first tested, unfired, in a cold-test station, and then first started on the hot-test stand. The engine plant is just outside of Minneapolis, and finished engines are shipped to the assembly plant back at Thief River Falls. It is much more efficient and less expensive to ship entire engines than to have multiple shipments of individual parts from various suppliers. Makes sense to us. As a final check, every now and then an engine is plucked from the assembly line and taken to the highly secretive engine dyno facility (deep inside the main assembly building), where it will labour away on the dyno, while engineers and technicians record data. We were lucky enough to find ourselves in this area.

Upon entering the lobby of the Arctic Cat main assembly plant, you will find an ATV and a snowmobile on display, various race photos, and a company store selling all manner of Arctic Cat apparel, gifts and memorabilia. Through the doors to the right is the Toy Shop assembly facility, and after a nod from security and a warning about where we could and could not venture, we were in.

As a little history lesson for employees and visitors, scattered throughout the plant are displayed various historical Arctic Cat production and race vehicles (mostly snowmobiles), and the first we found was one of their first snowmobiles. It must have been a huge improvement over snowshoes at the time, but like our ancestors who were kicked out of Europe, the original sled is only distantly related to the highly advanced models available today.

The Arctic Cat plant floor is comprised of three separate production lines, one for ATVs, one for sleds, and a third for Prowlers. To the left is where raw materials enter the building, and it is here that the manufacturing process begins. Tubing is fed into computer controlled benders, saws and coping dies to make a perfect saddle notch for welding, while flat stock enters the stamping press area to be slammed into the various brackets that are welded and bolted to each of the three main products. Machining centres carefully carve intricate shapes where needed, especially on the aluminum front-end components of each sled, and each step is controlled and documented. As the aluminum snowmobile parts are fed to a couple of robots that install hundreds of rivets in a highly advanced process that actually compacts and strengthens the surrounding metal, the newly formed tubing and brackets that make up the ATV and Prowler frames are off to welding. Again robots are used, and each part is held secure in a welding fixture, while multiple robots go to work.

Fanuc robots seem to be the choice at ’Cat, and as they finish their task, the now recognizable frames, A-arms, stems, and swingarms are hung on a line that goes overhead in the plant and winds it’s way to one of several powdercoat booths, and then to an oven where the coating is cured. The line steadily marches along, but as it approaches the assembly area, parts are plucked from the parade and placed in their assembly cradles. Curiously, we could see seats travelling overhead as well, and when asked, we were taken to an upstairs work area known as the “Happy Bottom Club”, which is where all seats are made. Near the centre of the room is what appears to be a merry-go-round in the floor, and on top of it ride many large aluminum cases. Theses are actually seat moulds, and an employee opens up each case an access hole, and squirts in a preset amount of chemicals that look like pancake batter. The chemicals react to the warm moulds, and three minutes later on their slowing turning ride, another employee opens the case and pulls out a seat. The new seat is then compressed a couple of times in a press to drive out any air voids, and is then placed on a rack to cool while a couple other employees stretch and staple covers over the top. Only then do they hop on the overhead conveyor and make their way to assembly.

Each assembly line operates in a giant U-shaped configuration, with sub assembly operations feeding the main line and making sure the primary line never runs out of parts. It’s efficient, well organized, and nothing is out of place. During our visit, Thundercat 1000 ATVs were in production, and it is amazing to watch team members building an ATV from start to finish in a very short time. Each team member is highly skilled and knows the importance of their tasks, but our favourite is the electrical/zip-tie girl, Amanda. At the end of the line, each new ATV is fired up, driven to a test station, and run through the gears in forward, reverse, and both 2WD and 4WD mode. It is then placed in a shipping crate. Again the process is well documented, and one lucky employee, Pat, has the task of driving every ATV that rolls off the production line. We certainly wouldn’t last long at that duty, undoubtedly because the urge to whip a few doughnuts on the plant floor would send us to the unemployment line. Pat has been at it a few years however, and oddly enough, a friend of hers at Polaris does the exact same thing. After all, the two companies are only 60 miles apart, and many ’Cat employees are family members and friendly competitors with the neighbours.

Across the aisle from ATV assembly, Prowlers are built on a line very similar to their ATV brothers, but in an even more controlled process. In fact, a customer can order a Prowler with any number of options or colour schemes, and as it makes its way down the assembly line, the unit is built as ordered. Even the individual Prowler assembly stations are unique, in that as the chassis approaches, a computer screen displays an image of the next parts to be added, along with torque specs. Just below the screen is a socket rack, which is also attached to the main computer system, and as the worker pulls the correct socket and attaches it to the torque wrench, the computer sets the correct torque. At the end of the line, assembly cradles drop away and Prowlers roll on their own wheels for the first time, on their way to a test station, although the roll bar is folded down and the steering wheel is on backwards for shipping. After that, it’s into a truck for delivery to dealers.

One area of the Arctic Cat plant that was especially interesting is the noise and harmonics lab. Basically, it’s a sound studio, only it’s large enough to drive a couple pickups into, and every surface is covered with sound absorbing material, so that nothing is reflected back. In that way, technicians can isolate sounds coming from the vehicle and work to quiet any vibration they find. It also has an odd effect on human ears, in that it is almost too quiet; it kind of screws with your senses.

Deep inside the R&D facility, we also found a couple of dyno rooms, where technicians run ATV and snowmobile engines on test stands, carefully recording all they learn. Engines are run at all rpm levels, sometimes at maximum revs for days, and under full loads that simulate real-world conditions. After that, the large test track across the street is used for further testing. It’s all part of Arctic Cat’s method of product development, but racing plays a big part as well.

To the Track
Arctic Cat has always used racing as a development tool. The problem was, until last year there really was no class for racing utility ATVs. Then the WPSA came along, and not really knowing what to expect, ’Cat sent a couple quads to the track with long-time racer Daryl Rath, who came home with the win. The rest of the season went pretty much the same way, and it was a huge championship title for Rath, and the entire Arctic Cat team. Just as they have done with their snowmobile program, ’Cat is again using racing for development experience.

Performance isn’t just a lofty goal found on the bottom of one of those often overlooked posters designed to inspire, and found in almost every corporate office. Whether it’s at the track, in the engineering and development rooms, or on the production line, the Arctic Cat team works towards maximum performance in everything they do. They’ve got the people, the products, and the championships to prove it.