Analysis and conclusion of an ATV modification 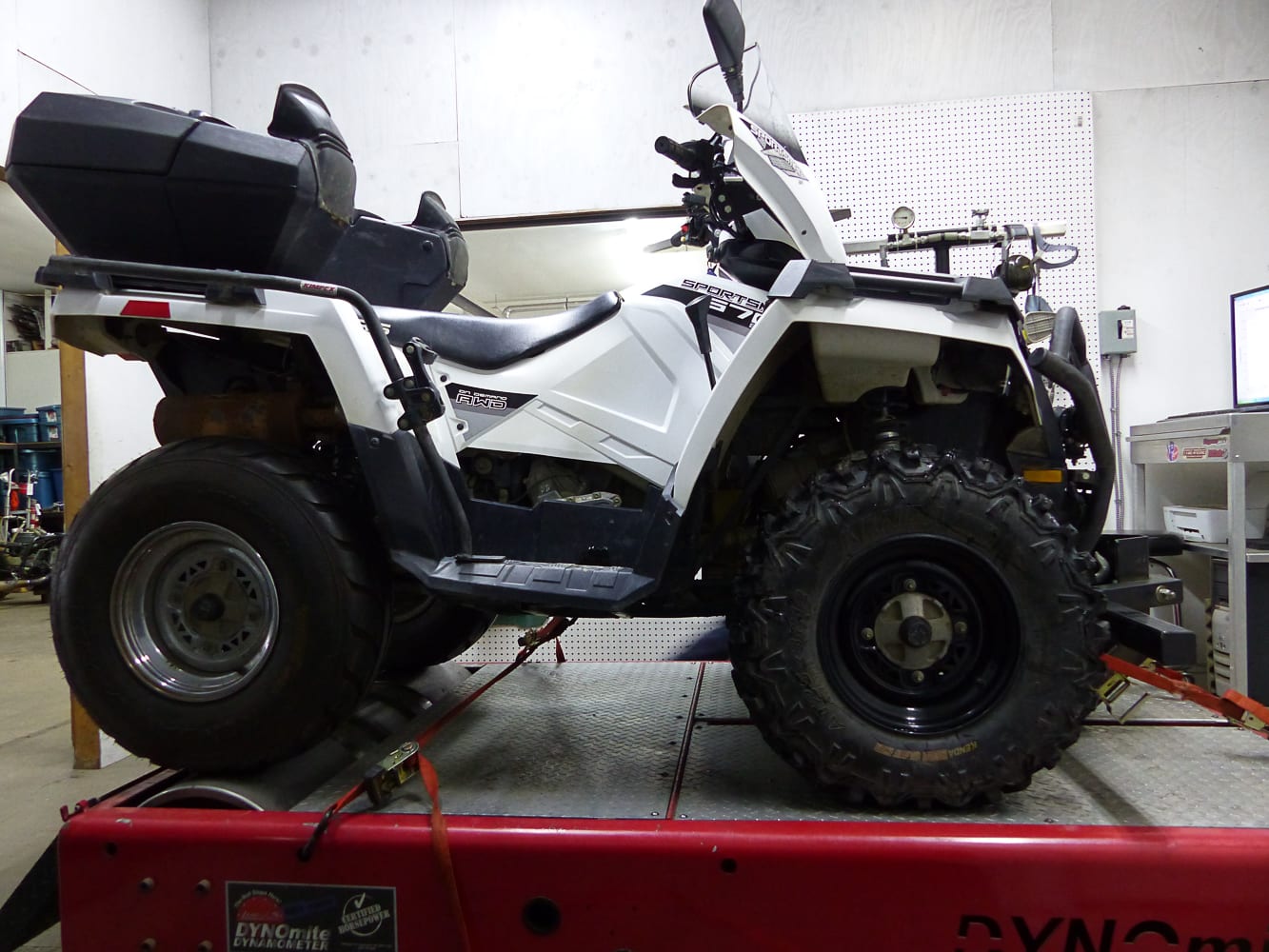 The installation of mechanical parts dedicated to performance upgrade brings a lot of requirements. Very rigorous monitoring of mechanical maintenance is strongly suggested because engine performance is rarely synonymous with reliability. In past articles, I shared the engine modification steps on a Polaris Sportsman 570. These modifications brought me a lot of fun, but also some headaches.

Let’s do an analysis of these modifications. Before making any changes, it is best to get baseline measurements. For this specific case, comparisons with a Yamaha Kodiak 700 were taken in a trail situation, as well as horsepower readings on the dynamometer at PJ Multimécanique. Once the baseline was established, I did the modifications followed by an engine break-in period. The Sportsman is now equipped with a big-bore cylinder and piston kit which increased the engine displacement from 568cc to 625cc. A QS muffler from HMF combined with the HMF injection optimizer module completed my modifications.

I decided to do the engine break-in period in a family ride. It was the perfect opportunity to spare the engine and avoid getting throttle happy in search of adrenaline rushes. How’d that go? I found myself far away from home and running deep in the forest when the ATV started to hesitate. The problem seemed to come from the injection system. I thought that the heat generated by the engine was overheating the new injection optimizer. I moved it away from the engine so it got more fresh air. I waited a bit to let it cool down and then started the engine again to give it another try – not fixed. Even worse, the engine started to loudly backfire and then suddenly stopped.

I started looking for the cause of the engine failure. I went through each of the steps and parts that were affected by the modifications. At one point I discover an injection optimizer wire that broke near the fuel injector connector. That’s fine. I found the cause of my problem, but what do I do now? I’m alone deep in the forest and I don’t have the necessary tools and parts to do the repair. I decided to remove the injection optimizer and reconnect the original injection system. This means that even though the ATV is equipped with an HMF muffler that requires the optimizer, I take the risk of running the engine without it. The engine was going to have to run with a lean fuel/air mixture. The risks of engine break down are now very real, but the situation forces me to go that way. Back home, I repaired the broken wire and reconnected the injection optimizer. I do some long rides afterward and everything seemed normal.

Back to the dynamometer

With the hope of confirming positive results following the engine modifications, I return to PJ Multimécanique. In order to get accurate engine combustion readings, I added a threaded bushing on the exhaust. This is to allow the installation of a broadband oxygen sensor that will be used simultaneously on the dynamometer. Pierre Jacques, the owner of PJ Multimécanique, set up the ATV on the dynamometer and starts doing several tests in different configurations.

Horsepower measurements on the dynamometer before any modification: 35.35 HP.

Here we read a slight power loss compared to the first test, but we note the air / fuel mixture measured with the oxygen sensor is now a bit richer thanks to the injection optimizer.

Third test: Big Bore Engine, HMF exhaust, and injection optimizer installed. The result is 31.27 HP. The air/fuel mixture is slightly leaner than the second test, which is normal because of the lower restriction of the HMF muffler.

As the optimizer offers the possibility to modify the injection parameters on the low, medium and high rpm maps of the engine, we performed some experiments. We immediately noticed that the optimizer really makes a difference in the air/fuel ratio. We decided to modify the parameters of several stages, then the measurements of the air/fuel ratio are taken again. The differences are noticeable but not obvious even if you go from stage 1 through 8 of the optimizer. We also noticed that the air/fuel ratio is always lean when the engine is idling or low rpm. The injection optimizer fails to correct the mapping in this operating range. This explains the sporadic small backfires we experienced at low rpm.

Well, the more I modify this engine, the less I get in terms of peak performance. On the other hand, the power curve changes. In some situations, it can be beneficial. However an irregularity appears. The more tests we do on the dynamometer, the less performance we get. A doubt settles – maybe something is wrong. The broken injection optimizer wire, which occurred during break-in, comes back to my mind. The possibility of induced damage to the engine by operating it too lean could be the cause.

Before potentially creating more damage to the engine, I decided to disassemble the cylinder head and engine cylinder right away.

What I will look for was possible engine damage caused by the operation with the HMF muffler without the injection optimization module, i.e. lean mixture damage.

Possible damages could include worn engine valves, overheated piston, and a scored cylinder.

I start by removing the cylinder head. I took off the valves and inspected them. They were perfect.

Then I remove the engine cylinder and inspect it and the piston. There is a problem, it is clearly visible. The cylinder shows that there was a possible lubrication problem on one side. Scratches are frankly visible on the cylinder wall. The piston has no anomaly. I measured the cylinder and the engine piston for deformation and both were very acceptable.

The probable cause is that running the engine without the optimizer was a big mistake on my part. Running the engine lean has allowed its temperature to rise quite a lot, enough to reach a critical threshold. The piston expanded due to heat which greatly reduced the space between the piston and the cylinder wall. From then on, the oil no longer had the space needed to do its job properly.

As for the big bore kit, it seems to be of good quality and, above all, affordable with its low cost. It could make an excellent engine rebuild package. But getting it for the purpose of adding extra HP, I’m not sure there. The fact that it comes with a thicker head gasket than the original one, in order to maintain a low compression ratio, does not help. Maybe a thinner head gasket would be beneficial for HP, but reliability would suffer and the use of high octane gasoline might be necessary. The experience might be worth it though.

The HMF exhaust has a perfect finish, a rich sound yet at a reasonable level, and very simple installation. Do not forget to add the injection optimizer. Once again, it will be a good replacement exhaust and will harmoniously fit with the look of any ATV. However, it will not really be beneficial in gaining power in this case.

In trail situation, and comparing with the Kodiak 700, we noticed more frank and aggressive acceleration. When the ATV reaches speeds close to that of cruising, the difference is less noticeable and we finally get performance something similar to the origin, as demonstrated by the curves of the dynamometer.

It is possible that in the case of this ATV, the Polaris Sportsman 570, the manufacturer has managed to almost optimally exploit the “bore and stroke” ratio with this engine. As this ATV is not meant to do races or competitions but is rather intended for recreational and work applications, I cannot afford to push the engine modifications any further in this experience. The next step would have been to CNC machine the cylinder head and increase the compression ratio.

The world of performance is very risky. Trial and error experimentation is a risky equation with several unknown variants that will sometimes end with pleasing results, and other times not. However, this kind of experience is always exciting to do!

Many thanks to the following partners: