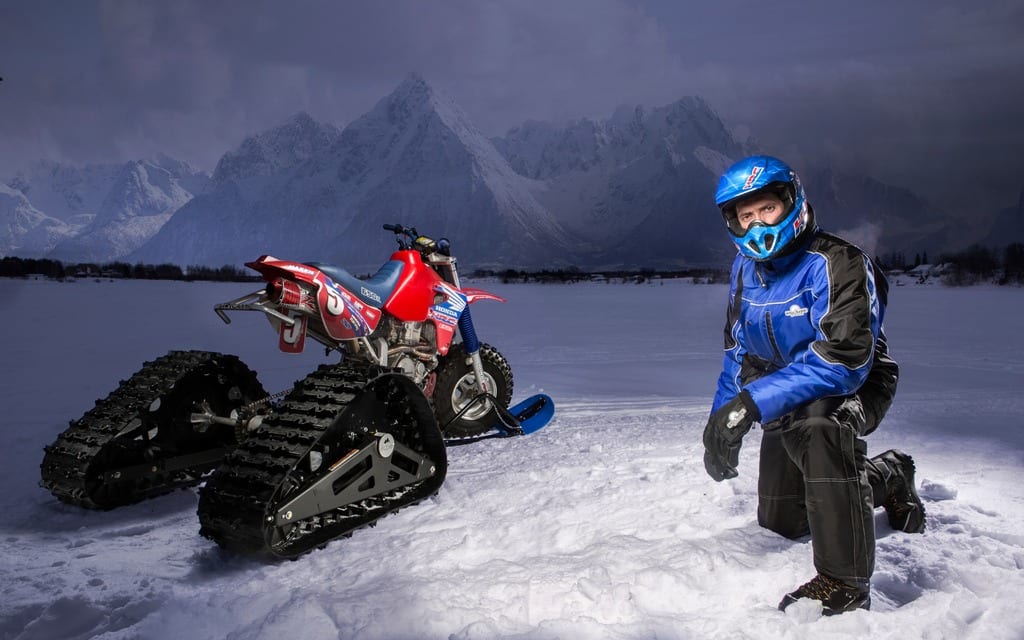 Winter for a motorsport enthusiast often means storing away the quad and taking out the snowmobile as a replacement. In many cases, several riders use their quad even during the cold season. However, a growing number of enthusiasts equip their machine with caterpillar style tracks to make sure their quads are safe in four seasons. The people from AkoonaTracks are devoted to selling revolutionary caterpillar type tracks, made in Quebec. On a more personal level, I proposed my ride (a modified 650R motorcycle changed into a three-wheel vehicle) to the folks at AkoonaTracks, in order to create a prototype of tracks for sport ATVs.

Having a sport ATV and being interested in providing it with tracks, I researched the Internet to find a company that could equip my trike. To my great disappointment, I realized that the ‘sport’ segment is very undeveloped, almost nonexistent. I managed to find a few homemade style track manufacturers on ‘ youtube ‘, no more. So, I continued my research and I finally found a Québec company, Akoona Tracks. I visited their website and made a call for information. I had the opportunity to talk directly with the General Manager, Mr. Mathieu Sarra-Bournet. He told me that their snow tracks were dedicated to utility quads with a design that is lighter than the rest of their line. During our discussion, I proposed as a mere joke, but filled with hopes, to provide my ride so he could create a prototype of snow tracks for sport quads. I also volunteered to test the goods, in addition to writing a detailed column on the subject. What a nice surprise I had! Against the odds, Mr Sarra-Bournet decided to participate in my project. I quickly realized that we were both passionate people and that Akoona stood out by the quality of their products and the open mind of their General Manager, as well as of its qualified personnel.

Akoona Tracks
Akoona Tracks, was created by Mr. Jocelyn Marquis from Cacouna, in the Bas-St-Laurent region, about 6 years ago. From a simple idea, Mr. Marquis has created a unique concept of caterpillar tracks for quads and side by sides. After many investments in time, money and contacts, he was able to share his passion. The year 2015 is the cornerstone of the company. Indeed, implantation of a solid structure and technique, in addition to the creation of a chain of production and assembly, has allowed Akoona Tracks to leap in front of everyone, in other words, to exceed the limits of the already seen. Akoona Tracks is newly managed by Mr Mathieu Sarra-Bournet, always working in collaboration with creator Mr. Jocelyn Marquis on his team and more than 50 people to ensure the production, quality, innovation, marketing, and customer service. Industrialization of the company ensures consistency in production, technology and quality. The diversity of the specialists who work at the company enabled him to diversify their production system in several models of tracks, responding to the various needs of the customer. Visit their website to find the model that suits you best, as well as a retailer close to you.

The quality of the products, the vitality of its personnel, the constant presence of research into innovation in all areas and the unanimous passion shared by Akoona Tracks personnel make this Quebec company a regional pride.

The prototype
Mr Mathieu Sarra-Bournet has agreed to participate in my project, because according to him, the idea of creating a sport model of caterpillar tracks for quads was already projected by the company in order to expand its horizons and satisfy as many clients as possible. The opportunity was therefore ideal to assess the feasibility of the project, test new models of tracks and to study the potential market. This project is ongoing and should lead shortly, hopefully, to a finished product.

As a result of our partnership agreement, the Akoona Tracks team got busy creating custom tracks and a front skate for my modified three-wheeler. An unexpected project for me, which was finally taking shape. So, I was like a child on Christmas Eve, more than eager. When I saw “the beast” with its new attributes on hand, I was blown away firstly by the speed of creation, impressed by the design and surprised by the robustness of the equipment. The overall appearance of my ride, as you can see, became simply unique, in its path heads turned, questions and envy showed on faces…

Why choose Akoona Tracks?
The people from Akoona Tracks were able to create versatile and especially robust caterpillar style tracks. Here are the main technical reasons for having Akoona Tracks installed on your ATV or Side by Side:

According to me, the major points that differentiate Akoona Tracks from those of other companies are:

If you are not convinced yet, I suggest you try the tracks on a private trail. It is possible to do so by contacting the Akoona Tracks team (see contact information at the end of the column).

In conclusion, Akoona Tracks caterpillar style tracks are in my opinion, incomparable. No other company offers the same price / quality ratio. I’ll let you get an idea simply by my writings for the moment, but I promise you in the fall of 2017, an action filled column. A column where Akoona Tracks caterpillar tracks will be put to the test on my ATV (my unique modified 650R 3-wheel motorcycle). I allow myself a few months for their taming and use in all seasons. In the meantime, who knows, maybe that the prototype will become an established model.

Thanks to the Akoona Tracks team for trusting me and by that very fact giving me the opportunity to use and test their equipment. To learn more go to:

Special thanks
Mr. Stéphane Gosselin from POLAIRE PLUS

Manufacturer and retailer of 100% Quebec clothing, providing me with all the warm clothing for the outdoor photo shoot.

For information about prices and retailers near you :