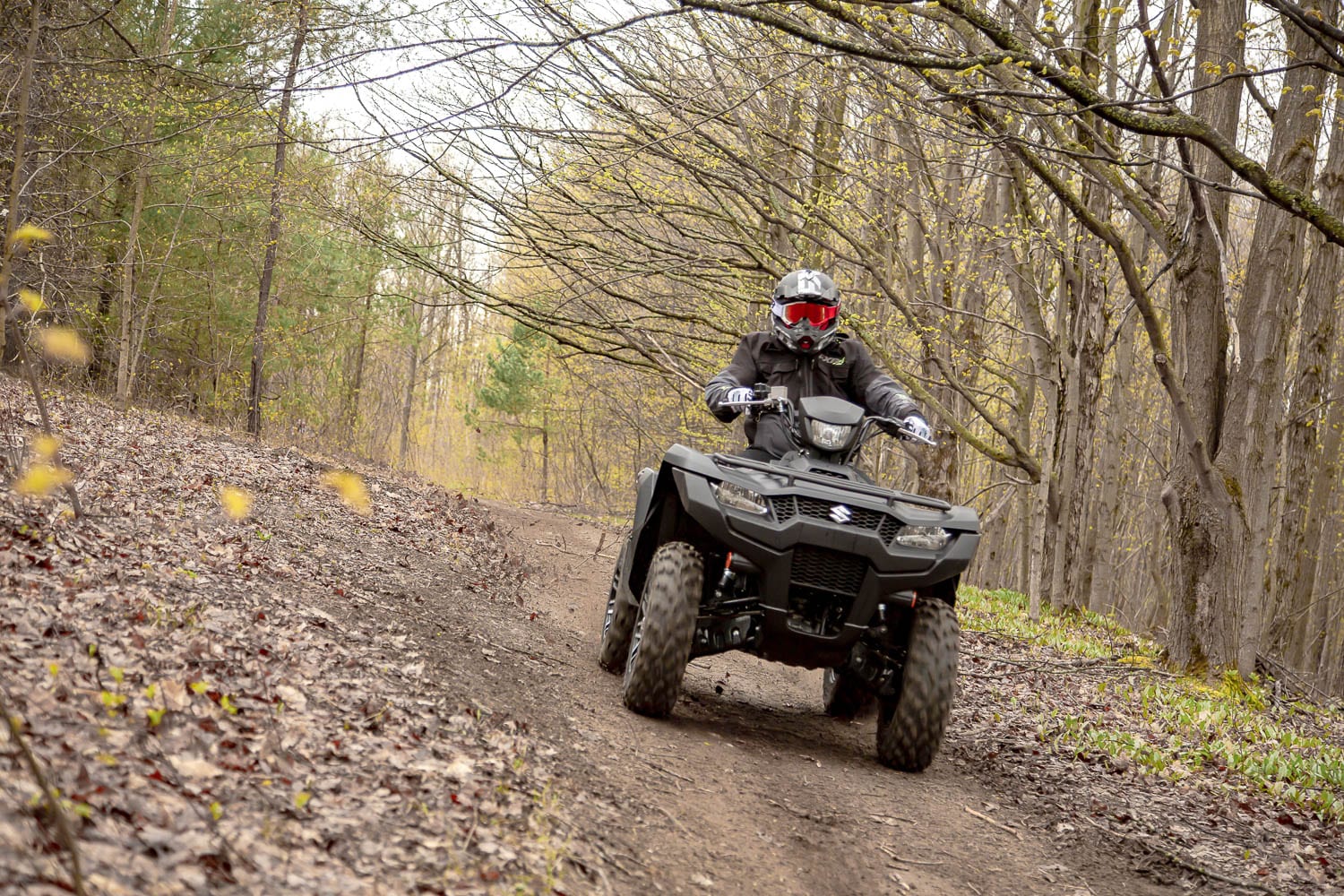 The ATV world has held many surprises for us all year long. If we could have a crystal ball that allowed us to predict what’s new in the industry, we would be one step ahead of other journalists who are doing the same great job as us. In this particular case, and for most press presentations, we were notified a few weeks in advance to be able to put an event on our agenda. The manufacturers expect professionalism on our part by not disclosing some confidential information before the agreed upon date. This silence gives us a bond of trust that benefits us in many ways.

Recently, when we received information that something new was about to take place behind the doors of renowned manufacturer – Suzuki. Our astonishment quickly turned into speculation about what the new model might be. Until the official release date, we had no information on the origin nor the content of Suzuki’s presentation.

The wait was short-lived as Suzuki Canada brought the media and dealers to the city of Orillia, Ontario, 135 km from Toronto, to present a complete redesign of their flagship ATV – the KingQuad 750.

A bit of history

Over the years, Suzuki had been innovative and even pioneered the ATV world in many ways. In the extensive history of this Japanese manufacturer, they introduced the first 4-wheeled ATV in 1983. It featured a small engine and included an automatic clutch making it a stable and easy to operate platform, perfect for beginners. A few years later, they came out with the QuadRunner model featuring selectable 2WD and 4WD modes, with a mechanical selector installed between the seat and the handlebars. It had a low center of gravity with a comfortable low seat.

With 1991 came the introduction of the first KingQuad model. It retained the same characteristics as its predecessor, but with a bigger engine size. In 2002, the name KingQuad was put aside for a time in favor of the Eiger 400 and Vinson 500. This brief episode was short-lived, as the KingQuad was reintroduced in 2005 with a new 700cc electronic fuel injection engine. It had a lot of power for an ATV at that time and the center of gravity was higher than usual compared to what Suzuki had used in the past. In 2009, Suzuki introduced the 500 and 750 KingQuad, both with electronic power steering, providing a smooth ride with minimal pilot effort.

The crowning of 30 years of innovation

As I mentioned earlier, we headed to Canada’s most populous province to see a complete overhaul of the Suzuki ATV, which has a long history of engineering innovation from the Japanese manufacturer. We were expecting and hoping for something really new.

We can not deny that the KingQuad has done well through the years. However, the model was overdue for changes to keep the ATV enthusiasts interested in what Suzuki has to offer when its time to purchase a new ATV. Suzuki unveiled major changes to the new KingQuad.

Style:
At first glance, the new KingQuad is pretty easy on the eyes. Always a good looking machine, the Suzuki looks to be racy and solid. Its bodywork highlights bold and frank lines that are a mixture of curves, beefy appeal and a tip of the hat to previous models. Its silhouette follows the current design trends, and we liked it from our first look. Suzuki has put every effort to meet the wishes of customers and the end result is really great. They managed to modernize the style and maintain a more aggressive look, while keeping the imprint of the original model. Several colors are available depending on the model, but the ones that seduced us are the bronze and the new camo pattern. Sharp stuff from Suzuki for sure.

The smaller, entry-level models are equipped with steel wheels, but the model powered by the 750cc engine and equipped with power steering comes with cast aluminum wheels that are really quite nice and tough, too.

Utility:
The Suzuki KingQuad has a recreational vocation but has also strong utility capabilities that have built it a serious reputation over the years. Suzuki has improved some of the features that have made this vehicle famous and innovated by equipping the KingQuad with expanded capabilities.

The towing capacity has been upgraded and is currently up to 600 kg (1,322 lb). It has gone up by 33-percent compared to its predecessor. This improved capability is also helped by its new rear receiver hitch, something we’d like more manufacturers to do.
The KingQuad has also received an interesting revision to its display. It has a liquid crystal display (LCD) and has been redesigned to improve appearance, visibility, and functionality. It displays the same useful, important information as before except for one important addition: a new service reminder icon now appears when necessary. This is a little refinement and it is not uncommon nowadays to have this communication tool. It’s a helpful reminder to let you know to check things out in case of an issue.

When we use our quad for work or leisure, we appreciate the possibility of high cargo capacity. Apart from an airtight storage space incorporated in the front fender, Suzuki has added two storage compartments at the rear of the vehicle for a total capacity of 8 liters to satisfy any additional cargo-hauling needs.

Lighting has also undergone a major overhaul. Its main front headlight is mounted on the handlebar for lighting in the riding direction. Suzuki dropped the handlebar-mounted headlight for a few years to reduces costs. Its return was very well received by our team. It also has reflector headlights mounted into the front fenders. These halogen headlights have been redesigned according to the new body styling and for the sake of aesthetics, and keeping with the new style, a recessed LED taillight completes the lighting package.

Performance
The 2019 model returns with the same basic motors as in the past. The 500cc and 750cc single-cylinder engines have undergone a few updates to help keep them relevant. This isn’t a bad thing, either, as we have been a fan of the Suzuki engines for a long time. In the case of the 750, a new oil jet is added to the crankcase to spray the underside of the piston. This addition increases the engine durability by increasing piston cooling and lubrication.

The continuously variable transmission offers improved acceleration when towing or hauling heavy loads through the new, lighter CVT rollers. These went from 28- to 25-grams. The tension on the drive pulley is optimized for better performance and the shape of the grooves of the torque cam have been modified. All these improvements result in softer starts and stops compared to the previous model.

The brakes have also undergone their share of improvement and offer excellent performance and braking feel. For 2019, the KingQuad is equipped with 190mm front disc brakes and a 106mm multi-plate wet-brake system at the rear.

Comfort
The 2019 KingQuad has revisions to its comfort features, but Suzuki knew not to break the mold of an already good machine. Electronic power steering has the same efficiency as its introductory year in 2009, but with improvements that give the pilot better assistance. The driving position allows rides in a relaxed position. The T-shaped seat gives way to smooth movements during weight transfer while cornering, too. The KingQuad is a comfortable machine to ride.

The rear suspension is completely independent and this is an aspect that made the reputation of this vehicle in its first year of introduction. The shocks have been updated with the addition of new dampening settings. The shocks are more rigid and that’s fine. They allow the rider to attack the curves without a feeling of being dragged on the outside of the vehicle. We noticed that the firmer front shocks made the new KingQuad less prone to front plunging than the previous model.

The travel of the Suzuki KingQuad shock absorbers allows the machine to face any kind of terrain or condition. The front travel is 170mm (6.7-inch) and 195mm (7.7 -inch) at the rear, whether for the basic model or the fully equipped one.

A new frame
Designers could not boast of having revamped this vehicle if they had not redesigned the frame. In order to increase its rigidity, the thickness of the walls of the chassis has been increased by 0.4mm. The rear suspension and the differential case have been reinforced for added durability. Therefore, all of these improvements contribute to an increase in towing capacity and a stiffer feel to the chassis.

Power Steering improved?
Anyone can tell you, when we have the chance to ride an ATV equipped with power steering, we can no longer ride without it. Although it was of exemplary quality and performance, Suzuki increased the assist motor power from 160 watts to 220 watts. The result, according to Suzuki, was to be about 30-percent more efficient and powerful than the previous model, and that would allow tighter turns and increased maneuverability. As a result, the pilot would experience less fatigue, especially after a long ride. However, the test vehicle we had did not meet these expectations. We have felt some change in the power steering effect that we estimate at about 10- to 15-percent improvement. On the other hand, it was more precise and less floating than the previous model and more efficient during deceleration for added comfort for the rider under these situations.

Improved performance
The new KingQuad performs as you would expect from a KingQuad. Comparing it with the previous model, Suzuki engineers have worked hard to correct the small problems for the latest version. These were small problems in terms of power, acceleration, improper power steering in some situations, and soft suspension that increased the oversteer effect when driving on rough trails. The new chassis, new front suspension, and new CVT calibration make the KingQuad a more responsive and stable vehicle on the trail for a much more sporty ride and a brand new stiffer rear stabilizer bar enhances ride control in rough terrain.

The new 2019 KingQuad version has great features. Its legendary reliability acquired over the last decades is not about to fade. Its beautiful finish and modern look make it an ATV to consider for a future purchase in the category of single-cylinder engine utility machines.
Finally, the strong return of the KingQuad demonstrates the intention of Suzuki to remain one of the leaders of high-quality ATVs, while most manufacturers rely on the UTV category to increase their market share. The new version of the KingQuad is very promising. ATV enthusiasts will be delighted as much as we have been and its refinement is on par with the Japanese manufacturer tradition.