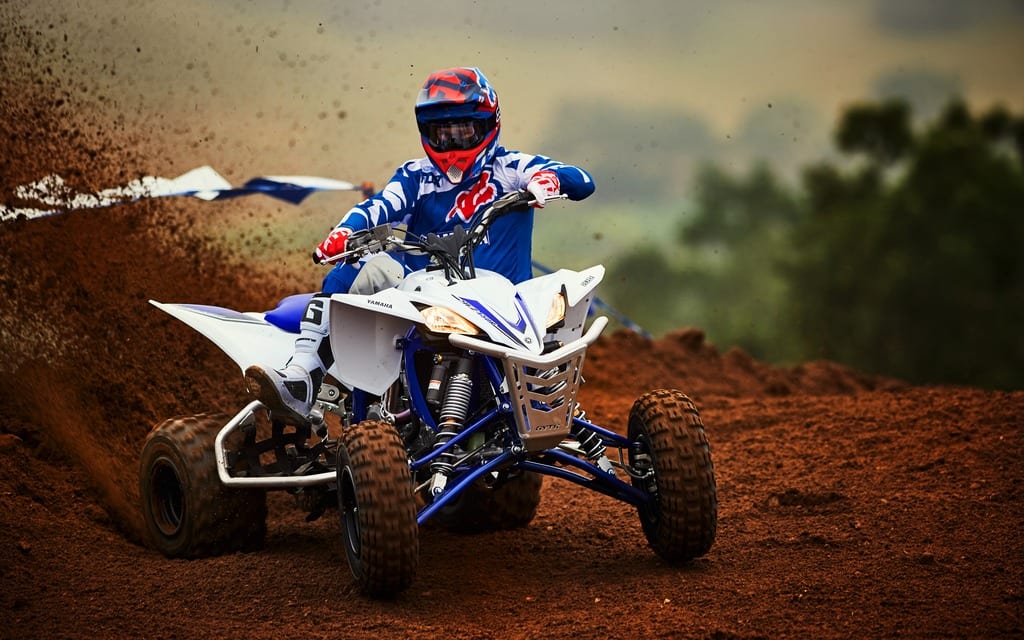 The 2017 Yamaha YFZ450R SE is the most technologically advanced sport ATV on the market today. Without any competing models, that might sound a bit meaningless but the truth is that it was and remained the top choice for many riders well before the sad disappearance of Suzuki’s LTR 450, Honda’s TRX 450, Kawasaki’s KFX 450, BRP’s DS line, the MXR 450 from Polaris and the high-end and high-priced KTM sport quads.

Yamaha engineers have stayed very active in the sport quad class and we feel we owe them a lot for that reason alone. Their dominating presence on the racing scene was made possible by their constant desire to improve on an already close to perfect machine. Almost every year change brought forward improvements, that have kept it on top of many podiums and that model continues to do extremely well in many competitions all over the world. Even if it doesn’t really have any competition anymore, they still stepped it up again for this year with a bunch of improvements including a new slipper clutch and new air induction system.

Made available only in SE form for 2017, the 2017 Yamaha YFZ450R SE combines a high-tech, quick-revving, 449cc fuel-injected engine with a lightweight, professional-caliber cast aluminum/steel chassis. The power/chassis combination as made and will keep making for a championship-winning machine time and time again. The 449cc engine uses titanium five-valve cylinder head technology (three 27 mm intake and two 28 mm exhaust), designed to deliver abundant power in the mid-range to top end, with more push coming out of the gate. The higher compression ratio further improves overall engine performance.

Introduced in 2003 for the following model year, the Yamaha YFZ450 was a four-stroke motocross track ready ATV, manufactured by Yamaha Motor Company to compete against a fast-growing number of manufacturers in this quest for ultimate performance on four wheels. This ATV type we have for long presented as the ideal quad for any beginning rider. Sound surprising? Truth be told, age related rules and regulations are yet to truly make sense and meet in our real world needs to stay safe while practicing this sport. As is the logical progression is cut. A young lad just turned 16 might throw himself onto a large-displacement model, with a chassis that was at the root intended for utility use. That poor child might only have vague memories from his or her days on a kiddy ride and no clue as to how all this extra weight could pose a threat. Yamaha did an amazing job when coming out with the Raptor 125 and 250, which presented the ultimate in ATV riding safety in general, by filling that gap between the very small and much too large for a youth choices. Sadly, the legislation didn’t follow the right path and many owners of these rides complained that authorities would not let them freely educate their children on them. Stuck to be tagged as 16 or older machines, these great ATVs simply lost their reason for existence and disappeared into the ATV history books, as fast as they had appeared. So that being said, even if it looks meaner, faster, more aggressive, doesn’t mean it is more dangerous to ride. Low weight is the magic factor to consider in our quest for a truly fun, invigorating, yet very safe, sport ATV experience and the YFZ450R, oddly enough, is the safest and most fun ride a teen can climb on. A beginning rider will truly get a sense of what can be done by slowly progressing up in the gears of an amazingly smooth-shifting manual transmission. The fact that this ride is built for maximised performance on a motocross track makes it extra safe for just fun trail riding. The shortest braking distances, the most control under your thumb to place the ride as desired, the best handling in turns, best position and feel of the rear brake pedal and extremely good footing with just about the best foot pegs on the market. It is the ATV in its most optimized form, which makes riding it below its maximum ability, extremely safe. The huge plus with this type of quad is that any rider can progress right up to the highest levels of the sport, always on that same machine. As the rider progresses, she or he will be able to upgrade the YFZ450R with high-performance GYTR products.

By the end of the 2004 ATV racing season, three of the four National Championships were won by riders riding the YFZ450. Five years later, despite the machine’s great performance and numerous successes in various racing events, Yamaha engineers decided to build an all-new machine with an aluminum frame, race-ready suspension and a completely new fuel-injected engine. This would bring many advantages forward such as a much lighter feeling thumb throttle, most welcomed by endurance racers and a smoother yet crisp and more predictable power delivery.

More power was not necessarily the big issue, making this ride faster and more of a potential race winner was mostly achieved through improvements in suspension and handling, as well as improved rider ergonomics and comfort. In top end power, the 2017 Yamaha YFZ450R SE is probably not the most generous but the true power of this off-road gem is in its close to perfect balance between all its high-end features. The 2017 Yamaha YFZ450R SE has great ground clearance and an awesome suspension system. The shocks offer the complete gamut of adjustment possibilities with high and low speed compression damping, rebound and preload adjustments and shafts that have a special Kashima coating that provide a smoother operation.

The superbly comfortable T-shaped seat is a more important feature than one might think before having experienced it. Yamaha might not have been the first manufacturer with this idea but they certainly perfected it. Freedom of movement is one of this ride’s best qualities and it is a large part because of this great seat design. Ultra narrow up front and super wide and stretching out far in the back, it also cups your bum perfectly while turning and dropping low to the side.

Take a good long look at this awesome sport quad’s list of advanced technological traits and rider-friendly features, it might very well confirm what we suspected all-along; that this ATV is the greatest ever made.