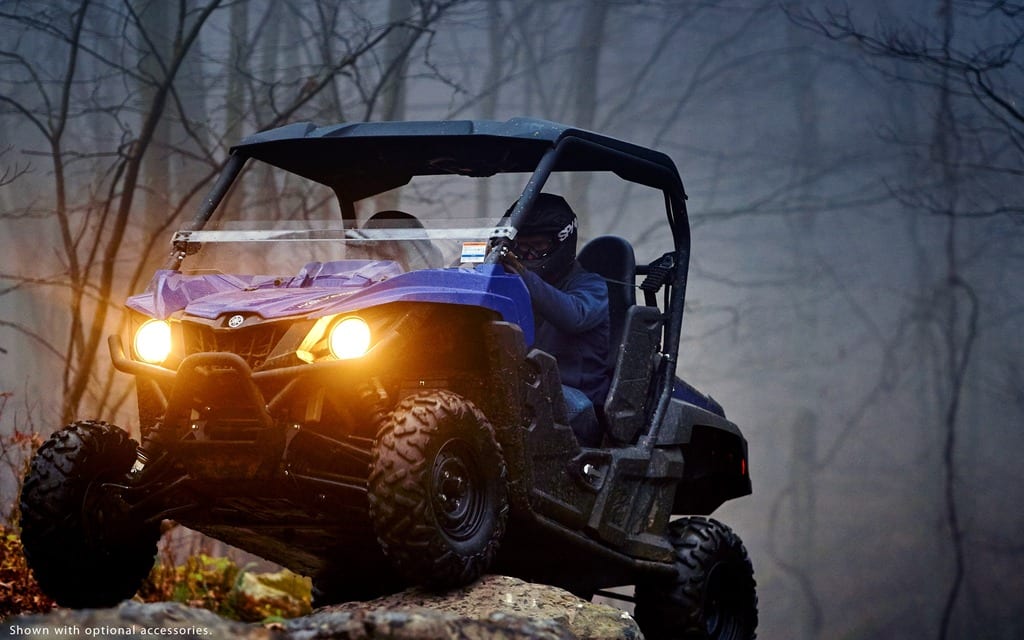 Keeping its promise for one new Side-by-Side model coming out every year for a period of five, Yamaha starts teasing the more sport-oriented riders with this interesting third candidate, to make this small family of Yamaha vehicles grow into one that can serve almost any type of outdoor dweller. The 2016 Yamaha Wolverine R-Spec, available with or without EPS, presents an interesting new Yamaha platform, which has us dreaming of a truly race-ready version that could give North–American manufacturers a good challenge at the track, against the big 1000’s.

The new 2016 Yamaha Wolverine R-Spec comes with its very own new engine and drive system. An EFI fed liquid cooled, dual overhead cam 708cc engine takes care of providing sufficient power for any driving style or terrain types and it is connected to Yamaha’s incredibly reliable Ultramatic transmission, so you can expect amazingly good reliability from this cool-looking new Yamaha.

The name choice for this new Yamaha Side-by-Side is truly on point. It quickly became obvious that it wasn’t inspired by one of Marvel’s most popular X-men but the true animal species that inspired that character a long time ago. Known to be the less documented known animal species in the scientific world because of its ability to dwell in the most extreme environments on the planet, the wolverine is a remarkably strong animal for its size. It will fiercely defend kills or territory against larger or more numerous predators such as wolves or bears. Agility, speed, big paws with sharp claws and a whole lot of confidence on very rough or rocky terrain, give it an edge for surviving the extra challenges of isolated cold regions.

The PBS series Nature released a documentary, “Wolverine: Chasing the Phantom” as episode #166 on 14 November 2010. This 53-minute documentary focuses on the efforts of a number of naturalists in the United States to track wolverines, collect genetic data, and learn more about wolverine populations, individual behaviour and social behaviour. It also tracks the raising of two male wolverines in captivity at an Alaska nature reserve from birth to maturity, and profiles the naturalists making these efforts. I came across it on YouTube and watched the whole thing. I strongly suggest you do the same. They are just awesome little buggers!

Wolverines live primarily in isolated arctic and alpine regions of northern Canada, Alaska, Siberia, and Scandinavia; they are also native from European Russia, the Baltic countries, the Russian Far East, northeast China and Mongolia. In 2008 and 2009, wolverines were sighted as far south as the Sierra Nevada, near Lake Tahoe, for the first time since 1922.They are also found in low numbers in the Rocky Mountains and northern Cascades of the United States, and have been sighted as far south and east as Michigan. However, most New World wolverines live in Canada.

Some of you might also remember seeing a Wolverine in ATV form, blending the lightweight handling of a sport quad with the traction advantages of a 4×4 Utility quad. 2009 marked the end of this older Yamaha Wolverine model, which had a sporty suspension that was inspired by the Raptor line and its nifty combination of extreme 4WD terrain conquering ability and lightweight, sporty architecture; those features was unmatched at the time. This steering wheel equipped new Wolverine seems to have the same potential to attract and satisfy a broad range of fun with the outdoors loving people. Surely hunters will appreciate its abilities and dimensions. Vehicle width has become an important factor to pay attention to, as more and more clubs are restricting it.

Although this Yamaha Side-by-Side is much more sport-oriented than the larger Viking, it can still be used to get a lot of chores done with features like a standard, heavy-duty 2-inch receiver-style hitch that can tow up to 1500 pounds. The bed, rated to haul 300 pounds of gear, presents an interesting new approach with a slide-in-a-slot removable tailgate that can’t cause any rattling noise. We were a bit disappointed in the fact that it doesn’t dump, but then again you could say that this is one of the vehicle’s feature that tag it further onto the sport side of the segment. There are six steel tie-down hooks to secure cargo to the bed and we’ve seen some very cool accessories that fit snug as a bug in there, such as a tough water and dust resistant low-density polyethylene cargo bed box with 21.4 gallons of cargo capacity that simply replaces the stock tailgate.

Conquering capacity isn’t only about having good power and traction. What’s the use if the vehicle gets too hooked-up in the thick mud, on rocks or any of the many obstacles possibly encountered off-road? Upon close inspection we found lots of details that aim to help this Wolverine conquer terrain better. Class-exclusive full underbody skidplates, which are swept up more than two inches on each side to maximize clearance at the wheels, let it glide over many obstacles that might hold others back. The front lower A-arms are wide-arc for much better clearance over rocks and we absolutely love how flares on the frame protect the rear wheels from oncoming obstacles. We also liked the front disc brake guards and small plastic CV boot guards but can’t help but think that it would have been perfect if those would extend up and become protection for the whole front suspension. Which brings us to what very well might be the most important feature on this vehicle; its KYB fully adjustable piggyback shocks with 9.7” of travel in the front and 10.6” of travel out back. Ok now it’s the “Fully Adjustable” part that is truly important. In our last issue there was an article aiming to help readers learn how to adjust their suspension, prompted by the fact that race-specific suspension adjustment possibilities were finding their way onto more and more vehicles offered to the general public. This new Wolverine is a perfect example. Adjustable settings include high and low-speed compression damping, rebound and preload adjustments.

This compact, two-person chassis allows for slick manoeuvrability in tighter trails and its width I personally agree with a whole lot in a handling sense. Sadly, it might soon not be accepted on many trails. It has become a tricky situation for many Side-by-Side owners when their vehicle is anywhere over 60 inches. Side-by-side vehicles are only allowed on the trails of quad clubs that accept them. Then you also need to know if some of them limit vehicle width. It is important to consult lists of quads clubs that accept side-by-side vehicles and is best to contact clubs in your area before you make a definitive choice of vehicle. The new Wolverine has a sport-ready stance at a little over 61 inches, which is less than all full-sport models on the market which are usually at 64 inches, but a little more than lesser sport models such as the Polaris RZR S 900 or Arctic Cat’s new Wildcat Sport at 60 inches.

In the tire department, we’re always happy when any manufacturer chooses to equip this type of vehicle with Maxxis 2.0 radials and like on many others, their design meets the requirements of this machine perfectly. It’s very simply a great all-purpose tire with superb traction in all conditions. Also known as the Bighorn, it provides a smoother than expected ride and transition over tree roots, stone and hard pack, while being very capable in mud and a master at popping out of deep ruts thanks to the lugs dropping down on its sides.

Seating position is more upright than on many true sport machines, but it does provide an excellent view of challenges up ahead when combined with the short and quick to droop low hood, which is easily removed for quick access to many maintenance needs. The all-new soft, supportive and secure high-back bucket seats promise great all-day ride comfort. The driver’s seat is 3- position adjustable. We have just been invited to a media event to try this interesting new way to explore the great outdoors and just can’t wait to find out how this platform will show potential to evolve into something even more powerful and sporty. Look for another article on that event in coming issues of your ATV Trail Rider mag. This early 2016 model release is teasing us into thinking their might already be another Wolverine about to scream out of its den, if we are lucky, for that same model year.

On March 12, 2015, Yamaha Motor Corp., U.S.A., launched a new Wolverine R-Spec “Build Your Own” (BYO) website providing customers the opportunity to personalize and accessorize their vehicle online. Future Wolverine R-Spec customers can now see what their customized machine might look like via the interactive site: www.yamahawolverine.com.

Yamaha currently has more than thirty-five accessories for the 2016 Yamaha Wolverine R-Spec. A comprehensive catalogue includes popular products like folding windshields and wind deflectors, overfenders, cargo bed boxes, front grab bars, accessory mounting bars with spare tire mounts, and gun boot mounts that can be ordered directly from and installed by Yamaha dealers. You need not worry about buying a roof, as it comes standard on every Wolverine.