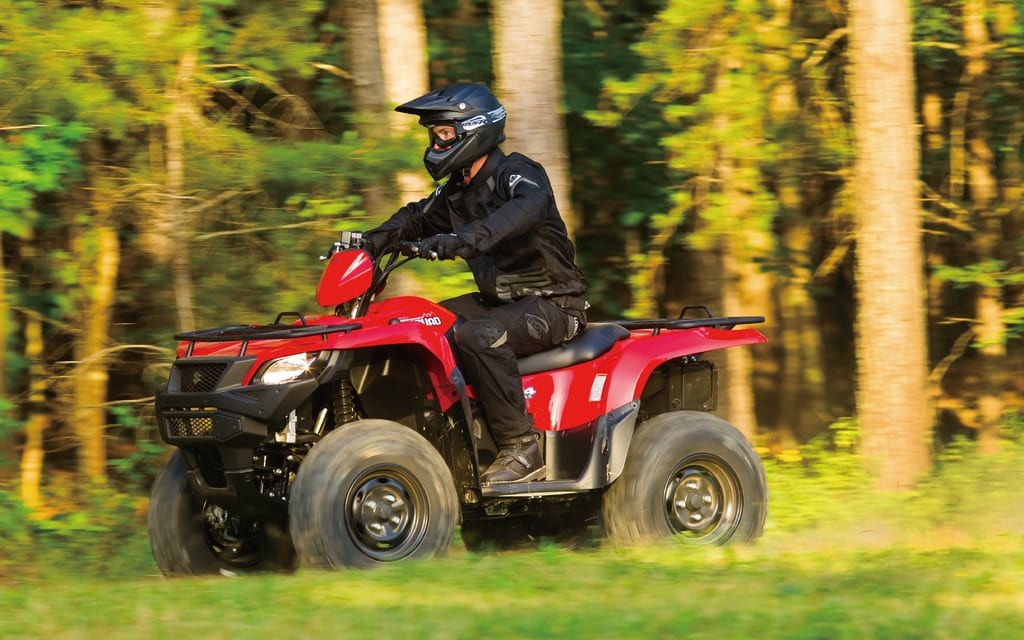 The Suzuki King Quad 750 needs no introduction; it’s been hitting the trails for ages. Floating on the waves of its smashing success with the QuadRunner LTF 500, popularly known as the Vinson, Suzuki joined the heavy-duty ranks with its King Quad 700 in 2005. While most manufacturers leaned towards twin cylinder engines, Suzuki went with a single one. After the launch, Suzuki confirmed that it was the best ATV their company had ever put on the market. Reviews from the public and specialized media were excellent and Suzuki was fine with only slightly modifying its flagship model to 750cc in 2008, and then offering power steering in 2009. After that…the Japanese manufacturer lost momentum. Instead of investing in developing its flagship, it let its shooting star fade into the background.

In 2015, Suzuki quietly worked on the King Quad 500 and 700 to upgrade its mechanical aspects. This year, Suzuki slightly remodelled the King Quad body—nothing major, just enough to reassure us that they were still competitive on the market with their line of quads.

Bodywork and finish
The King Quad styling launched in 2005 by Suzuki engineers got a new look in 2016. Nothing revolutionary: the quad’s general appearance remained the same, only the front frame was redesigned to include the headlights for novelty sake. However, this new design also alluded to a desire to control costs. The third headlight, (directional headlight) on the handlebars, was removed—such a shame, really!

The body’s design, however, remains timeless—even after 11 years. Its general look is still current. We tested Suzuki’s special edition built for Canadian riding. This edition adds front and rear fenders, a winch with wired remote that can pull up to 3,000 pounds, a two-inch trailer hitch, and front and rear mudguards which are directly integrated onto the body. The mudguards blend well on the rear of the unit, however the result on the front-end is not as seamless. The mudguards, however, are a great addition and offer excellent protection against mud and other debris on the trail.

Unlike the competition, which leans toward metallic paints, Suzuki continues to offer scratch-resistant moulded plastic on most of its King Quads. With a little added cost, you can lean over to the camouflage version or opt for the mat black finish. Regardless, there is nothing negative to say about the assembly quality of the machine as a whole.

Ergonomics, instrumentation and lighting
The driving position is pretty low compared to American models. The machine is more compact and therefore more comfortable to drive for less experienced drivers. It has all the space necessary for bigger drivers. The T-shaped seat is well padded and comfortable for longer rides. The seat design also makes it easy for drivers to effortlessly shift their body weight during sportier riding. The handlebars are not as wide as American ATVs and include the usual layout of controls. The front and rear brakes are controlled separately. The lever on the right side of the handle bar controls the front brakes while the lever on the left of the handle bar controls the rear. This layout gives you more braking control when driving. You can also activate the rear brakes using the foot pedal.

The 30-Watt quad headlights provide sufficient lighting thanks to the well-thought out design of the reflectors. However, it’s a shame the additional 40-Watt directional headlight in the handlebars was removed in the newer version.

Driving and power
While the competition was focusing its development towards twin-cylinder, Suzuki went with the heavy weights opting for a single 750cc, still the biggest one to date. It obviously comes with an electronic fuel injection system for easy start-ups regardless of the weather. In an effort to optimize fuel combustion, the fuel injection was positioned in the frame, leaning 48 degrees to the front, opening on the side of the air/fuel admission chamber. In 2015, the engine was somewhat improved to optimise its performance in air pollution emissions, power, and fuel economy, which was improved by 10%. To do this, the combustion chamber now comes with a second spark plug. Also, the inlet and exhaust camshafts, as well as the injectors, were revised to increase performance. And lastly, the exhaust was additionally equipped with a catalytic converter.

The engine still feels powerful, as one would expect from a heavy-duty vehicle, but it’s no longer as intense as it was in the past. The power is not as explosive or impressive as some of the twin-cylinders on the market, but the engine pushes hard without generating any shocks through the spectrum of its revolutions. It delivers power smoothly to move forward on rough and tough terrain, and has enough torque and power for either work or quick treks along trails. Exempt of disturbing vibrations, the machine’s twin camshafts do an incredible job in this regard.

In terms of trekking, the power will never leave you lacking. But if you’ve decided to follow smoother twin-cylinder engines on a role, you’ll have to push the machine hard. However, the CVT Quadmatic transmission is a model of its kind and works in symbiosis with the engine for maximum power. This transmission is reliable and flawless, since the belt is always engaged. If you don’t abuse the machine by pulling heavy loads, it’ll most likely last as long as the quad itself.

The quad’s road handling is a pleasant surprise. The vehicle comes off as being easy to accurately handle on trails thanks, in particular, to the fact that the centre of gravity remains pretty low to the ground. The frame supports an independent wheel suspension and wheels come with two triangular arms that work efficiently to control vehicle movement. In cruise control mode, the ATV offers excellent directional stability and nothing deviates it from its path.

Given the weight heavy-duty quads now weigh in at, power steering has pretty much become a necessity. King Quad’s power steering works very well, provides just the right degree of assistance and eliminates aftershocks in the handlebars, which can sometimes be felt with the more standard models under certain conditions. It reacts well enough to all kinds of terrain. In terms of the wheels, Suzuki decided to drop Dunlop for Carlisle AT489, also found on Polaris machines. These tires have very soft sidewalls and bounce in the jolts, easing at once part of the accuracy of the quad’s steering. We noted on another sample that a set of better quality tires, such as Big Horn 2.0, radically transforms the machine and brings it to another level of trail handling. Regardless of the tires, we quickly become comfortable with the machine’s reactions at higher speeds. It takes turns where you want and comes out powerful with the slightest push of your thumb, skidding only slightly in the back. This quad truly offers a wide range of abilities, from work-related to low-speed tough terrain needs, to inspired trail rides.

The quad comes with a 4×4 shift on-the-fly system connected to a switch on the handlebars. In serious cases, it’s possible to block the axle with an electrical switch and get four-wheel traction for optimal adhesion. The system works well on icy terrain and guarantees genuine stability.

The King Quad 750 2008 fuel consumption has already been pegged at 8.4 litres/100 km. We couldn’t get a new measurement for this test run, but if Suzuki’s claim to have improved it’s fuel efficiency by 10% is true, the theoretical consumption would hover around 7.5 litres/100 km. Equipped with a 17.5 litre fuel tank, the King Quad has the potential to run without refuel for nearly 230 km. That’s pretty remarkable!

Budget
While Suzuki hasn’t been screaming it off the rooftops, it has been working on the retail price of its vehicles to stay competitive. As I write this column, the manufacturer is promoting its summer liquidation, offering its 750 Quads at the following prices: King Quad AXI base model: $9,100, King Quad 750 AXI with power steering: $10,300, and King Quad 750 AXi special edition: $11,100. The intermediate King Quad priced at $10,300 is positioned a hair’s length above the Polaris Sportsman EPS 570 cc low-end model ($9,100) and the Can Am Outlander L 570 EPS model ($10,000). The King Quad 500 AXI EPS is perfectly positioned in this niche at $9,300.

Suzuki is repeating Yamaha’s move from last year, placing its quads smack dab in the middle of the bunch, increasing its competitiveness on the market…at least for the duration of its promotion.

Still got it?
Despite its aging status, the Suzuki King Quad is still a surprisingly versatile machine. It seamlessly adapts to different driving styles. Its reliability is enviable and we know that it will serve for years without causing trouble to its owner.

Its steady positioning on the market can be explained by a design that perfectly reflects the era and remains comparable even today. While the Wow! factor from earlier on is gone, its design is just fine now. We hope Suzuki will steal the show with a brand new machine to once again lead the pack as it did back in the early 2000s.

In the meantime, the King Quad offers excellent quality for value, performs well, is comfortable and comes with very low production costs, without forgetting its unerring reliability making it completely unnecessary to buy an extended warranty. For all the reasons mentioned above, YES, the King Quad’s still got it and you should give it go.