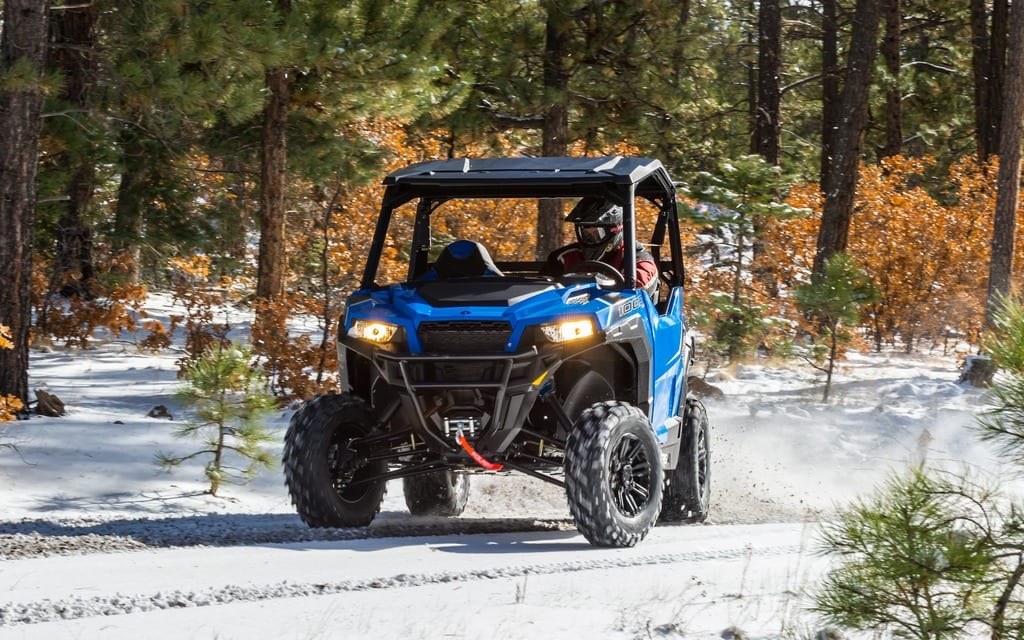 The all-new 2016 Polaris General 1000 EPS is sort of a blend of the RZR S and Ranger XP platforms. It is obviously aimed to compete directly with BRP’s Can-Am Commander and offers a similar feeling seating position and car-like fit and finish to the cockpit. Now buckle-up and get ready for a wild ride because we are about to discover which is truly highest in the chain of command.

The seats are positioned more upright than a RZR, which provides great visibility and makes it much easier to get in and out of. These redesigned premium bucket seats did a great job of keeping me locked in when things got rough. They were designed to keep you comfortable no matter where you ride and we certainly had a chance to test that out thoroughly here near Santa Fe in New Mexico.

Snow in November around these bland-coloured parts, is already a bit unexpected; but to get about a foot of it overnight just prior to testing the 2016 Polaris General 1000 EPS, was a complete and not at all unpleasant, surprise.

New Mexico has a stunning variety of places to ride on federally managed land. Historically, OHV-use was largely un-managed but that has changed. The Forest Service’s Travel Management Rule implementation has formally designated motorized route systems on all five National Forests in New Mexico. To date, the Lincoln, the Santa Fe, and the Carson National Forests have issued Motor Vehicle Use Maps (MVUM’s) for their entire Forests. The Cibola National Forest has issued MVUMS’s for all of their Districts except the Magdalena District (expected Spring 2016). The Gila National Forest has published their decision but has not yet published the associated MVUM.

The game-changing new 2016 Polaris General 1000 EPS uses a 100 horsepower ProStar engine which makes it a lot of fun to drive; maybe not as much as any RZR but very close. Its excellent power-to-weight ratio enables it to accelerate from 0-40 mph in 3.6 seconds. Not bad at all for such a Utility able Side-by-Side. This 999 cc twin-cylinder engine delivers excellent torque throughout its rpm range – 65 ft. lbs. of torque to be precise; that means that it will haul and pull big loads effortlessly. The 2016 Polaris General 1000 EPS has 1,100 lbs. total payload, comes with the standard 2″ receiver and a generous 1,500 lbs. towing capacity. The capacity to carry 600 lbs. in the deep dumping cargo bed also makes it an amazing partner at work. It features a convenient one latch tailgate as well as Lock&Ride integration for a variety of specially made accessories to get work done efficiently.

Stepping inside the 2016 Polaris General 1000 EPS you will experience a more refined car-like experience from the moment you touch the superb handles. Ease right in without feeling like your falling into the seat and discover an amazing cockpit. Yes I know it has more power, more ground clearance, more wheel travel than a Commander but what impressed me the most about this vehicle, is that every little detail feels like it has been thoroughly studied, not just to better the Can-Am but rather the whole adventure of owning and using such a versatile type of vehicle. Something as simple as the seat belt latches being set a hint higher than any I’ve ever come across, meant that it snapped right in, without having to look for it. Sounds like a small thing but it is huge in my book. When you run a tight schedule you can’t afford to lose a second or two every time you need to buckle your seat belt properly. For many people it will be many times during the day and they might be tempted to neglect it completely; no problem, a rev-limiter will kick in and won’t let them get hurt. Yes, I know, some might just snap it in and then sit over it but what can you do? It is, their prerogative.

The center console acts as both an armrest and additional storage space and contains a 12V outlet and two cup holders so it feels quite different from a RZR with the two seats much closer together and less cumbersome than in a Commander which places the occupants much further apart. A total of 23 liters of integrated storage is found in the cab with a combination of enclosed and in-dash storage, which is a lot more than the RZR. Another big difference is that it features factory-installed half-doors with armrests and despite my generous size no part of my body was hitting anything while riding, even in the most intense bits of trail here in beautifully and truly wild New Mexico. In many sport Side-by-Side vehicles, my knee ends up too high and its side bangs on something; a handle or one of the doors tubes; many times I only notice it once I stop or come back down to a relaxed pace. On some occasions my knee was even swollen and taking on an odd tint. The all-new digital instrumentation cluster is also impressive; it moves with the tilt adjustable steering wheel so you always get maximum visibility.

The 2016 Polaris General 1000 EPS has an 81-inch wheelbase, which is quite a bit less than a RZR XP at 90 but a bit a few inches more than a RZR S. Paired with what Polaris calls a performance-oriented suspension that provides 12.25 inches of travel up front and 13.2 inches out back, it did a great job at not feeling as front-heavy as a Commander over larger bumps. Even so, it remains very important as with any Side-by-Side to not take a bump for a jump and make sure that if you decide to launch off of something, that you commit to it and not ever let off the gas while the front wheels are in the air and the rear are still in contact with the ground. Yes I know we are not supposed to, but I did try and get it to catch a little air at times and it felt great at launch providing enough torque to push the front up, during flight it stayed nice and level and upon landing it took the hits without bottoming; things you would only expect from a full-sport vehicle. Shock duties are left to the very popular. This set up proved to be very good in the fast paced rough trails we encountered.

The 2016 Polaris General 1000 EPS comes in three forms: a red base model with regular black steel wheels but it is equipped with EPS, a Velocity Blue Premium (just have to love how they call certain colours) that adds a Polaris HD 4500-pound winch and front bumper and the Orange Burst (so funny) Deluxe model including an MTX 8-speaker sound bar overhead so you can listen to your favourite tunes and other items such as 27-inch GBC Dirt Commander tires, the 4500-pound winch and low profile front bumper.

Taking the guesswork out of finding your preferred suspension adjustment, the FOX Podium 2.0 QS3 shocks offer a simple three-position shock adjuster. I made sure I tried each setting to get a feel of where they were all set and what range of adjustment they offered and was truly pleased both with how quick and easy it was to stop and set for a different type of trail ahead and how each setting is spread apart enough to truly feel a difference. The softest setting is great for when you are just trotting around enjoying the sights and smells of nature and maybe doing some rock-climbing to get to the breathtaking view a mountaintop as to offer. As soon as you start pushing the General to show off its sportiness on faster but still bumpy trails, the middle setting should be preferred; you will enjoy a good solid feeling while turning and the ride will stay smooth and comfortable through the rougher parts. The stiffest setting is in my opinion or for my taste only useful if you are really pushing it hard in the dunes or drifting every curve up a nice and flat fast switchback.

In conclusion I think it’s fair to say that this new General is at the utmost top of the off-road hierarchy right now, until maybe BRP decides to seriously upgrade their Commander line. With an unmatched level of versatility, amazing power and surprisingly high level of comfort and convenience, the General truly commands all that is the off-road.