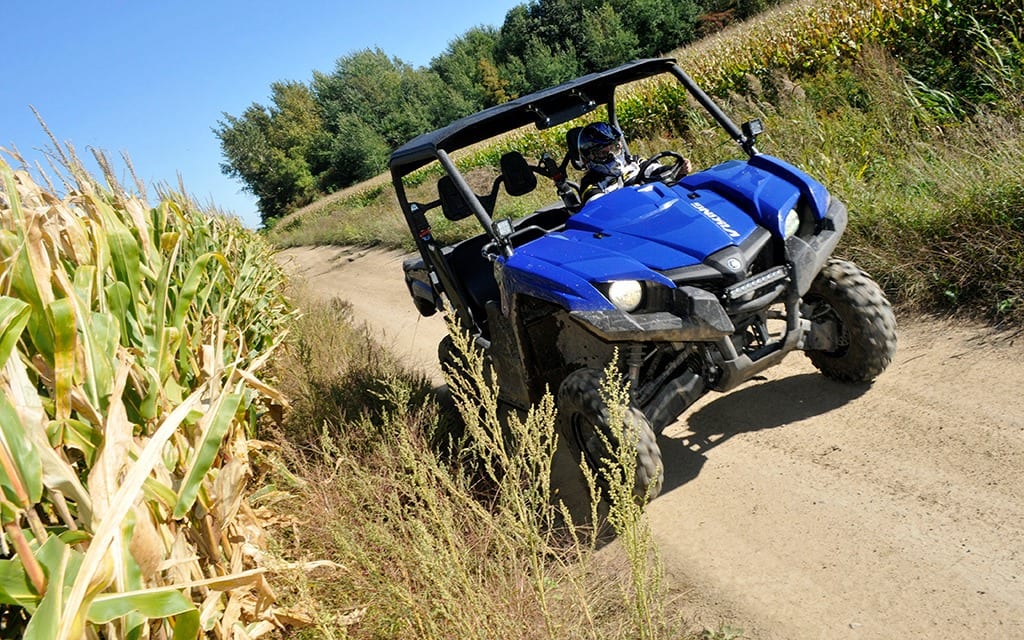 Unfortunately for many Yamaha Rhino fans, the Side x Side that started it all won’t be manufactured anymore. The good news is that Yamaha has developed an all-new Side x Side to replace it, which is like nothing else out there. The all-new 2014 Yamaha Viking 700 can appeal to a lot of hard-working utility enthusiasts, who also enjoy a good trail with a few buddies ride and/or hunting or fishing trips far out in the wilderness. The most exciting part of this for us is that we are told this is the first of many other Yamaha Side x Side models to come. Their objective is to introduce a new model every year for the next 5 years.

It’s logical that the Viking be first on the list to accommodate the largest number of UTV users possible. Although the sport class is enjoying surprising growth, the bulk of this industry remains on the utility side, where countless people count on Yamaha’s good reputation for reliability at work. For the Yamaha people, this model represents an exciting new chapter in Yamaha’s participation in this segment. It’s no secret that this company has been struggling with quite a few frivolous legal suits against them over the years, trying to blame the Rhino for their poor judgement or lack of skill as drivers. Understandably, this has greatly slowed progress and the development of models in this segment for Yamaha. Well, that’s all about to change! Since we are sort of more of sport background than utility, we are crossing our fingers that the next Yamaha Side x Side is something that could give all of those RZR and Maverick rides a run for their money at the races. Looking at some of their extreme offerings in other segments, we know very well that these guys can truly deliver the goods with an awesome sport model.

The stability of the Viking is much better than that of the Rhino, since it is a much larger machine with a wider stance and longer wheelbase. Actually, this ride is extremely solidly planted to the ground and will need a much higher level of stupidity to flip it over. Built with a width sized to help minimize row crop damage, the Viking seats three adults next to each other comfortably, all able to enjoy the same clear view of everything going on up front. This presents a new kind of off-road experience which encourages people to converse and share even more than in a four-seater. I was quickly drawn to sit in the center seat, to get a feel of what that was like, once in that seat, which is set back 5 degrees to minimize the rubbing of shoulders, I couldn’t help but think that it would be cool if the steering wheel would be here in the middle. The pass-through design of the cockpit would have made it a viable possibility. As I got in I didn’t have to sit on the side seat and then slide to the center, it was easy to put my first foot in just a bit further than usual, and fall right into place in the center seat. Comfort is very good, which we soon found to stay true even while conquering rock-filled sections. The seats are very plush and do a great job at keeping your bum in place. The vinyl has just the right amount of grip, to makes up for the lack of side support, which we understand, had to be as such to keep it easy to slide in and out of the vehicle quickly.

The all-new 2014 Yamaha Viking 700, like the ruthless warriors it’s named after, is fearless of any challenge with Yamaha’s most powerful 686cc, liquid-cooled, fuel injected, SOHC new engine that delivers strong power from the low-end and through the rpm range. The engine is located under the cargo bed and can be easily accessed when the bed is lifted. Acceleration isn’t as impressive as with many of the sport models that have recently come out, but it’s enough to make the Viking fun to use for recreational purposes. Having fun in the Viking is all we had time for during this short one week testing period with this unit, which we should mention is outfitted with added accessories like the LED lights and cargo bed soft cover. When pushed in performance in some nice and clear flat curves, the vehicle will break into a comfortable drift that feels natural and predictable only if you help it a little with the steering. It will only lift a wheel off the ground if stupidity is present. Like I always do when testing, I exaggerated certain moves and was sloppy with the pedals and aggressive on the steering trying to imitate to worst driver possible and the Viking did a superb job of keeping me safe.

We only had this ride with us for a few days so of course no bugs came out to bite us, but the reliability of a Yamaha needs no verification. Add to that good reputation recent improvements in technology bringing even more peace of mind and reduced maintenance needs to the world of off-road, and you’ve got a good recipe for better value and convenience for the consumer.

Electronic fuel injection ensures peak performance in nearly all conditions and elevations, as well as no hesitation starts in cold weather. A new large-capacity air intake system was built to improve overall engine performance with the air cleaner box accessible from inside the cabin for easier servicing. Like the new Grizzly ATV, the Viking uses a new air injection system to burn un-combusted elements in the exhaust, to further reduce emissions. It also boasts the same 30% gain in fuel efficiency.

Like any Yamaha, this vehicle feels very tightly assembled with a flawless finish and ready for extreme working conditions with a steel skid plate under the frame, providing protection from rocks and other obstacles and helps the Viking slide forward more easily in sticky mud. We love the thick hollow construction of the doors and the side panels that look like they can truly cushion impacts and keep even the reckless in one piece.

Yamaha’s proven electric power steering technology is also solid and we had a unit equipped with this addition, which will be worth every extra dollar spent by hard workers and players alike. What is important to us is that it works seamlessly and doesn’t rob too much feel of the trail and steering. The Viking was not just easy, but perfectly set between being responsive and smooth. Clo, said that everything felt perfect but she would have liked to see a tilt steering to help her get to an ideal elbow position and that the gate shifter would take a bit of getting used to for quick operation in a work scenario. The seat was set in the middle of three settings offered so bringing it forward would have helped her a little, but we didn’t want to bother with bolts to bring it forward or back. I was left wishing for the same sort of small details that make a huge difference. The tilt-steering, which would not only offer much more flexibility ergonomically but also create a sportier feeling drive when desired. It’s sort of really a shame in this case in particular, because the Viking does have everything else needed to feel sporty when need be, but it’s totally robbed by that delivery truck fixed steering position.

There isn’t much we found that could be improved on the Viking, only minor changes that should have no consequence on your decision to buy this vehicle or not. Like the not deep enough four cup holders that will only hold your water or juice bottle when parked, a pretty intense vibration at idle which dies as soon as you get rolling, and a throttle pedal that is too soft to hold your foot up, which I suspect I would get annoyed with on very long treks. We suggest adding any sort of support for the heel, which would be a simple fix for that.

The suspension does a good job of making the Viking feel real smooth on nice trails and safe in turns. It is claimed that it keeps the same comfort and control, even when the cargo box is fully loaded with its 600 lb. capacity or when pulling up to 1500 lb., but that’s not something we had a chance to test out. Even so, we would have liked to see at least some adjustment possibilities.

In conclusion, we very much liked the fact that it felt natural to us to drive it in a sporty fashion. Usually, utility tagged vehicles don’t really inspire us to do so. If you’re cruising around slowly enough, the Viking has just enough power to break into a drift out of a turn instead of over-gripping at the back and creating body roll. This is a trait we wish to discover on every Side x Side and we are happily discovering more and more models that are passing that test. With a steering geometry that will somewhat automatically counter-steer when needed, and suspensions with beefy sway bars that ensure minimal body roll. The Viking offers all of that, combined with real world toughness to get any tough job done, without having to worry about the vehicle failing you or slowing you down in any way. From the steel cargo bed that fits a full pallet of goods and makes dumping a load feel like child’s play, to the front compartment under the hood offering easy access to all your maintenance needs, everything in between displays the same great quality Yamaha is known for. The Viking is a true work horse, also able to thoroughly entertain family and friends on week-ends. We foresee it becoming a common sight like the Rhino some day, and serving owners well for many years to come.