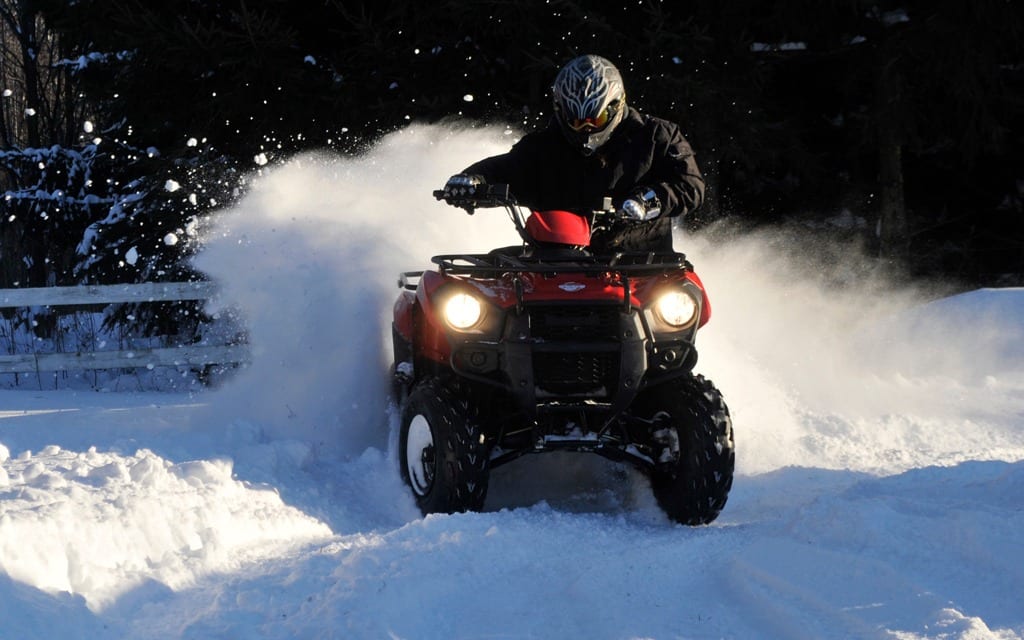 Strong with the force, this little quad is. Good times and loyal service, the lightweight ATV will provide. Influenced by its stronger and much more intimidating in performance big brother, the new 2013 Kawasaki Brute Force 300 is. Do not underestimate the power of this trail brute, please you it can, features and design aspects stolen from the 750 it has. Emphasizing on low-end and mid-range power it does, and although smaller in dimensions, its looks and technology, similar they are!

Enough with the reverse speech like my long respected and wise friend Yoda. What can I say, I’m a huge fan and for some odd reason, this little quad reminded me of him; small but not to be underestimated. The new 2013 Kawasaki Brute Force 300 is powered by a 271cc liquid-cooled engine, with its fuel mixture fed by a Keihin CVK32 carburetor. A quick and easy slide with your thumb of the handlebar-mounted choke, and a press of the electric start, brings it to life, but I was drawn to pull the recoil starter, also included in case the battery dies down, instead. My first pull was unsuccessful as the handle shot out from my hand halfway up, numbing it for a second as I giggled. My bad, I hadn’t chucked it a little, to feel it hook up first, and then any person will start this particularly good-looking quad with ease. It reminded me that this wasn’t such a small engine. 300 was a big number not that long ago. My second try was more decisive, strangely gratifying, it shot back good memories of my early days on my three-wheeled ATVs this time. Back then, the only button to push was the kill switch.

Let’s just get rid of the very extensive features list on this 2013 Kawasaki Brute Force 300, and then I will get back to the results of our testing this machine in winter conditions, that would usually discourage any two-wheel drive ATV owner to go out for a whole day of fun trail riding. It delivers the same high degree of strength found on every Kawasaki off-road vehicle. Practicality and everyday versatility are its strongest points, and when there is work to be done this small, light, easy to load, store, wash and maintain trail riding monger, won’t let you down. This one has everything you could wish for, and that would normally be reserved for bigger and more expensive machines. The long handlebar and very complete digital display mounted on it, for example; keeping you informed about everything you need to know as you ride, gives you the impression of being at the commands of a shrunken version of the 750. Speedometer, trip meter, fuel and temperature gauges, clock, and indicators for neutral, reverse and high-beam, are all very easy to spot on the go, much like the one on the much bigger Brute Force . Its front storage compartment is actually larger than the one on the 750. It has racks that are just as sturdy and a super practical with multiple ball-ended metal studs protruding downwards that are perfectly placed to use ratchet straps instead of bungee cords, for a better lock-down of the 44 and 66 pounds of cargo the front and back racks can hold respectively.

You get a DC socket located conveniently on the left side of the handle cover, providing quick and easy power for accessories, or keep your power-tools’ batteries full. The easily swivelled spring locking lever for the park brake at the left side controls is also something we’re not used to seeing on such an affordable quad. The Brute Force 300 also features a generous front storage box, which is actually bigger than the one found at the 750 model. Additionally, you’ll also find a practical open top rigid pocket, molded into your right front fender, with intelligently sized curves in the center that you can press fit a standard water bottle into, to keep it locked in and stay there, even when throwing this light and quick ride all over the place, which I thoroughly enjoyed doing, even in the deep snow. Towing capacity is a decent 500 pounds, and the quad is even winch- ready, with space and a mounting bracket just below the front grille. The 3.2 gallon fuel tank and low fuel consumption means it will serve you for a good amount of time between fill-ups. All maintenance needs are easily met with everything easily accessible. Removal of the seat exposes fuses, the battery and the air filter box cover that snaps off in a jiffy. The nicest surprise was to also find the coolant refill cap there. Oh yes, and you might be interested in knowing that the 2013 Kawasaki Brute Force 300 clears strict EPA and CARB standards, thanks to Kawasaki’s secondary air system that helps minimize emissions. We certainly didn’t expect so much work readiness from such an affordable ATV.

Fitto was nice enough to help us out once again, to bring a ride to its limits, so you don’t have to.

Both stuck with a busy schedule, we couldn’t afford to wait for the generous amount of snow that had fallen all at once, to compress down under its own weight. He was anxious to ride his newly-acquired bargain priced Polaris Outlaw 525, and I was weary of my Kawasaki test ride being underequipped for so much snow. Much to my surprise, the Maxxis tires, jointly developed by Kawasaki and Maxxis, provided excellent traction and my tiny Kawi was actually pushing through the deeper parts with about two feet of snow, only just a few times needing a few side to side wiggles. This Brute Force is so light, that I could use one of Fitto’s very efficient and quick to get back rolling techniques; pick the front right up, stand the ATV on the back tube of the rear rack, and pivot the whole thing around with side to side motions, hands on the ends of the long A-arms, to drop the front back down and then roll out of trouble in your tracks. If this something you think you are strong enough to do with a 450 sport quad, you will find this unorthodox technique to be just as doable with this sporty utility ATV. When the going gets dirty, or packed with snow like we encountered on that super-fun day, the wide fenders and wonderfully drainable floorboards, do a great job of keeping the elements from hindering the rider’s concentration.

I have to admit being a bit tough on the unit that day, keeping the thumb pressed in completely, pretty much the whole time. What can I say; it never hinted at having weaknesses and handled everything like a true champ. The seat is a little firm, but comfortable in all positions. Many seats still cause a bit of discomfort when the sides of them are used during more intense situations, but not this one. The foam continues around the base of the seat on the sides. They should all be like that!

Ok, so it might not provide you with that big of an adrenaline rush, when you squeeze the throttle to its maximum, but it might surprise you as being very well-laid-out from low to mid-range. Much larger ATVs like the Brute Force 750, have a power output made to satisfy the most experienced of riders. No beginner should be left to ride one of these; this Brute Force 300 is much more suitable for them. That doesn’t mean its performance level should be taken lightly. It might still be wise for a parent, or even a friend, to give the throttle limiter screw on the back of the thumb throttle cable housing, a few turns. It will still be loads of fun to ride, since the response is really good, as soon as you touch the long and nicely rounded thumb lever. It will only limit the top speed as desired.

The 2013 Kawasaki Brute Force 300 offers strong capabilities for such a compact and affordable package. From plowing snow to trail-blazing with friends, this ATV accomplishes much more than we expected it would. Its strong, liquid-cooled, 271cc SOHC four-stroke engine is designed to provide good low- and mid-range torque which comes in handy for any type of use. Power is transferred efficiently to the rear wheels via a Continuously Variable Transmission (CVT) with centrifugal clutch, with ratios tailored for optimum power delivery in the lower speed ranges, in other words where it counts the most. These also provide just the right amount of engine-braking to help you down tricky downhill trails and prolong your 3-disc hydraulic braking system, which uses three 180mm discs squeezed by single-piston calipers to stop you in a very short distance, even on snow, thanks to those awesome tires we spoke of earlier.

The 2013 Kawasaki Brute Force 300’s double wishbone suspension setup with 5-way adjustable shocks up front and a damper bolted on a swingarm at the rear with the same adjustability, offered to tailor the ATV to specific needs or conditions. The result is a comfortable ride in a wide range of conditions, and the wider stance than usual for this class, results in confidence inspiring handling. The occasional jump over a well-rounded bump was very smooth and fun to experience.

To sum things up, everything felt perfectly designed and functioned flawlessly during our month, graced with its presence in our garage and our trails. For beginners, you won’t find a better outfitted ATV in the entry-level class. The smooth and precise feeling hydraulic levers and a perfectly positioned and functioning foot-peg and brake pedal combination are among the many things we loved about it. The most magical thing though, which is of a more general nature, is that it offers big-bore class features and the same attention to detail, at a price that hard-working people can appreciate. Though it is further in performance than its open-class sibling, the 2013 Kawasaki Brute Force 300 still delivers plenty of power and has the ability to tackle just about any task or riding situation.

On a final note, we feel it important to mention Kawasaki’s very responsible approach to safety by offering first-time buyers of a new Kawasaki ATV, $100 for completing an ATV rider safety course, conducted by the ATV Safety Institute (ASI). Interested consumers can call ASI toll-free at 1-800-887-2887. We join our friends at Kawasaki in encouraging ATV riders to always wear a helmet, ride responsibly and to respect the environment.