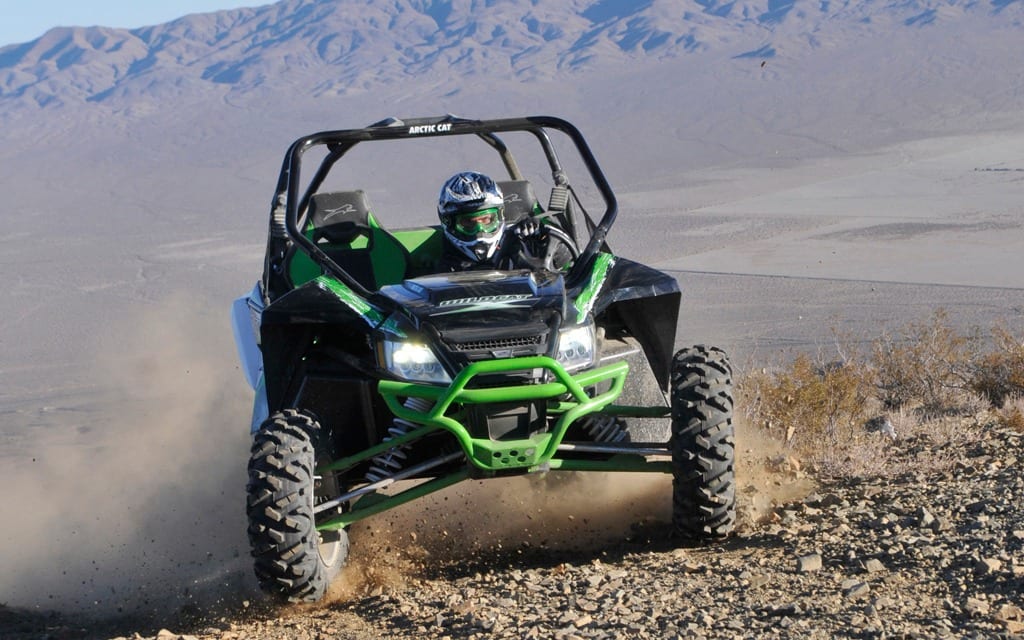 Try and keep a large wild feline in a tight cage for a while and see how it reacts when you open the door and dodge for cover. Chances are it will thrust forward with surprising efficiency. Well this is sort of what just happened with Arctic Cat’s impressive first design for the new class of Full-Sport Side x Side vehicles. The new 2013 Arctic Cat Wildcat 1000 X is a beast to be taken seriously, even if it is solely recreational. One thing for sure is that the growing popularity of Side x Side racing is a big factor everyone in this industry should be interested in. It’s no surprise to see Arctic Cat’s engineers coming back around quickly, to fully harness the potential of their powerful Hemi V-twin; they proudly built on home soil.

Looks are of some importance and this new X version of the Wildcat 1000 does look a tiny bit better with its different graphics and added bumpers, but this X version is definitely all-about bringing the performance level of one of the coolest rides we’ve had a chance to test here at ATV Trail Rider, up a notch. It has more to do with how it performs over the toughest of terrain and can now keep up with or maybe even pass the fast Maverick or RZR 900 XP. The original Wildcat was and stays unmatched in suspension travel and in looks, with a lower seating position than the others, that enables the occupants to feel a bit more at ease with the impressive high-performance capabilities of such vehicles than in the two others, but was lacking a little in off the line power, in comparison to these same rides.  Experience tells us that a high horsepower count doesn’t mean much, if it isn’t getting to the ground efficiently,  so news of this aspect being the main thing they had addressed with this upgraded 2013 Arctic Cat Wildcat 1000 X, was like music to all ears of invited media representatives at the Wildcat 4 press event in California early in the year. Maybe even more so for a recently active on the Side x Side racing scene guy like me! I just couldn’t wait to get things happening with this truly awesome, sci-fi looking 2013 Arctic Cat Wildcat 1000 X! Truth is I would even race that four-seat version, if they would let me, but you will understand my preference for the more frequent flyer that is, this two-seat off-road beast. Luckily, a few Wildcat 1000 X units were also there ready for us to discover and enjoy. I have to admit, I was quick to make an unofficial reservation by leaving my helmet on the dash of an X unit. Among the few obvious changes first spotted were the Maxxis Bighorn 2.0 tires that come standard only on the new 2013 Arctic Cat’s Wild Cat X 1000, and we think it represents a good upgrade in performance and durability.  All Arctic Cat’s Wildcat models now use FOX Podium shocks, instead of Walker Evans shocks. A center-mounted handle was added, to provide the passenger with better security, and both the X and Limited models get new heavy-duty front and rear bumpers.

Polaris, during their wonderfully aggressive campaign, aiming to wow us with fun off-road vehicles that enable us to share the joys of trail riding with family and friends, was first to come up with this great idea of offering a new class of sportier, mainly recreational off-road vehicle. The RZR-S is still certainly capable of entertaining two avid trail explorers at once, but the younger 900 XP is a much harder to compete against true all-out racing machine. If you are familiar with the difference in performance, of these two vehicles, then you could say that there is about the same difference between the original Wildcat and this new Wildcat 1000 X. Yes, it is that much faster and stronger, so well worth the extra money for those who expect a lot from their Sport Side x Side.

We older kids are having a ball bringing new people into the activity, travelling to places we never dared go before, with speed and efficiency we could only dream of, not so long ago. The very successful RZR models, more importantly the S and XP versions, prompted other manufacturers to offer such fast and nimble Side x Side models, with a heightened fun factor as the main objective. The Japanese are yet to enter this new class, which is surprising when you look at how much success Polaris as had with their RZR line. Thankfully, BRP responded with their Maverick family, and now Arctic Cat with this impressively futuristic off-road racer. Yes, this new 2013 Arctic Cat Wildcat 1000 X does have what it takes to be a force against the others, in this exciting new class of vehicle, which has huge potential for success on the international off-road racing scene. There are rumors of a new Honda Sport Side x Side coming out; we like where this is going!

The original Wildcat would sort of hesitate before letting all of its power be felt. The full potential of the mighty 951cc V-Twin engine is now better harnessed; thanks to the new “Rapid Response Clutch” from Team Industries, an improvement found throughout the entire family now counting three members: the Wildcat 1000, Wildcat 1000 Limited and Wildcat 4. By the way, another trail-ready Wildcat with a 50 inch width will be joining in soon! How cool is that? The Cat team had a copy of that new clutch assembly for us to observe and pointed out certain elements that made it special and a much more efficient package. Heat dissipation and air flow in the CVT housing is crucial to optimize the performance of such a high friction dependent transmission systems. The most obvious particularity was an added large ring or flat circular plate over the ends of the cooling fins on the secondary, added so that the air flow is better concentrated in one direction, which helps with the evacuation of heat, translating into improved belt performance and longevity. The entire set-up was obviously lighter. Also very interesting, is that when the plates come together, they stay perfectly in line with each other and thus engage the belt in a smoother less damaging fashion.  Usually, the interior plate rotates slightly in relation to the outer one as it approaches the belt, causing a bit of extra friction every time it engages.

With its 90-plus horsepower, this one felt like it could take on the best out there and the first generous press of the throttle sent chills up and down my spine. This torque generous output feels much better off the line and also gives the driver much better control of what happens with the rear, when the vehicle is already conquering terrain at a good rate of speed. This means that you drive the vehicle just as much with the pedal as you do with the steering, the way I think it should be nowadays, to be worthy of the Full or All-sport denomination. This machine has loads of power to play around with, and felt more in tune with this vehicle’s extremely efficient high-performance suspension. A highly efficient long travel FOX suspension has replaced the Walker Evans units. The new clutch isn’t the only change to give it this highly satisfying control under power aspect; many changes were done to Cat’s biggest off-road ready V-Twin.  It got new high compression pistons, new cams, and a new crankshaft with pork chop shaped lobes, that are significantly smaller and lighter. The wet clutch has also been removed, getting rid of even more rotating weight from the engine. Ok, now some of you might wonder what this wet clutch delete thing is all-about, and why would they put one in there in the first place? Wet primary clutches are, in general, much more reliable and longer lasting than dry clutches, and so they are often found on road bikes. However, many high-performance motorcycles will have a dry clutch, which is smaller and lighter. This can potentially give engines with a dry clutch, a speed advantage. On the other hand, a wet clutch will be prone to fewer problems, because it uses a compensating sprocket and, of course, because it works soaked in a lubricating oil bath, which keeps it cool and clean all the time. The sprocket absorbs the shock when power is transferred between the engine and the transmission, and the presence of fluid means that a wet clutch will run more quietly when disengaged. So, Cat engineers decided on removing the wet clutch to be more in tune with the expectations of high-performance machine buyers. A thing to keep in mind with this dry choice is that the belt is more susceptible to damage, if the drive train isn’t aligned perfectly.

The 2013 Arctic Cat Wildcat 1000 X boasts incredible industry, leading wheel travel at 17″ in the front and 18″ in the rear and 13 inches of ground clearance, despite its low seating position. The long travel FOX podium shocks have a 23 position compression adjustment, dual rate springs, and large remote piggyback reservoirs for better resistance to fading from overheating hydraulic fluid. The Wildcat has a 95 inch wheelbase, 13.5 inches longer than the Polaris RZR XP, which really helps it stay stable and smooth in long fast turns, as well as making it the best to cross a series of big whoops, without letting off the gas. It actually takes some getting used to, as you tend to brake for certain obstacle and then realize that it could have been conquered much more quickly. The cabin does tilt a bit more in turns than it does in a RZR 900 XP or a Maverick, but you get the same solid stability, with just a different feel. The sandy desert trails in Randsburg, California, were a hoot to conquer in this powerful Wildcat 1000 X! We felt a significant improvement over the original Wildcat, with the increased power of the new 90+ horsepower 951cc V-Twin engine.  We haven’t had a chance to race any of these hot, new Full-Sport Side x Side vehicles against each other yet, but we could tell that this new 2013 Arctic Cat Wildcat 1000 X was very close in performance to Can-Am’s Maverick and the Polaris RZR 900 XP. The most noticeable advantage of the 2013 Arctic Cat Wildcat 1000 X over the Maverick, and maybe a little over the RZR XP, was how very little steering input was needed to turn the front wheels, which meant much quicker response to driver input and a sportier feel. The steering on the Maverick needs to be turned a few inches on either side before the wheels respond; one of very few things we didn’t like about that particular model. The turn radius is quite wide though with the Wildcat and turning it around in a tight area will need a few more moves than with the other two.

The 2013 Arctic Cat Wildcat 1000 X is a true work of art. Its exoskeleton chassis gives it the look of a perfect candidate to star in a James Bond movie. A vehicle Q would surely love to add things to, like an ejection seat, machine guns hidden under the front fenders, and maybe even a cloaking device; then again, it would be a shame to not show-off this vehicle’s beauty. With this newfound power and efficiency in putting it to the ground, this amazing Side x Side will be one tough Cat to tame, or beat. Enjoy!

For more information on the above mentioned models, please visit the Arctic Cat Website