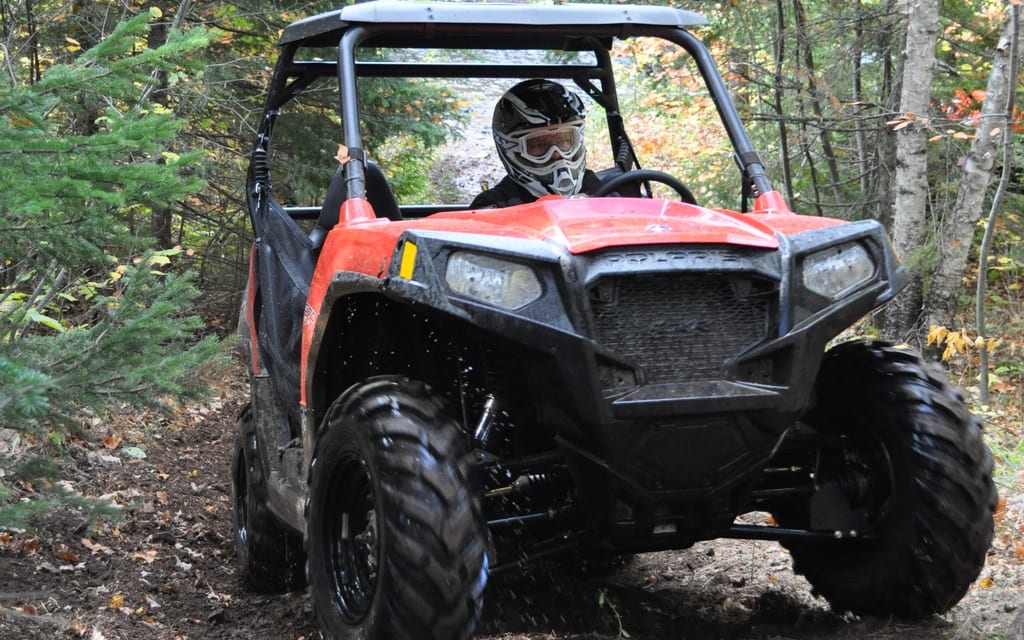 Before the Polaris RZR 800 came along, there really wasn’t any Side x Side dedicated to high-performance recreation. Every previous unit had an upright seating position, a motor designed more for low-end towing and work chores than high speed operation, and a large, rear dump box, which was great for hauling most everything from bales to cinder blocks. That all changed one day in the Arizona desert, when the world got a first glimpse of the ground breaking RZR 800. Suddenly, there was an all-new class of Side x Sides built for fun, and today I would be riding the little brother to the original RZR 800, not in the open spaces of the western desert, but in the tight trees of a Northern forest, right up the shore of Lake Superior.

RZR FAMILY HISTORY
The recreation-loving public had been begging for a high performance Side x Side, and creative aftermarket shops had been doing a good job of modifying what was available from Polaris, Yamaha, Arctic Cat, and Kawasaki, but those gains were still based on a utilitarian chassis platform. There was only so much that could be done. The new RZR 800 rolled on a chassis designed for conquering whoops, rather than chasing cows, and it was an instant hit. No other manufacturer had anything close to the RZR.  It came with a sporty suspension, quick handling, a seating position that tucked the driver and passenger down into the vehicle, rather than feeling as if you were perched on top of it, and a potent motor designed for aggressive, high-speed performance.  Polaris had a huge advantage in the high-performance race, but they shifted up another gear when they released a second version of the RZR platform with the RZR-S 800.  The “S” model came with long travel suspension, great shocks, more power, and an aggressive stance that left no doubt what it was designed for. Finally, in January of 2011, Polaris again charged well into the lead with the RZR-XP 900, which was all-new model from the ground up. The original RZR had kicked off a new segment to the sport, that continues to accelerate upward, with ever more capable models. Not everyone plans to conquer vast stretches of barren desert however, and there was room in the lineup for another member of the RZR family.

A NEW RZR
When Polaris told us about a new 2012 Polaris RZR 570, we were a little skeptical about the need for a smaller displacement model. Years of riding and racing had led us to believe too much power was just enough, but that’s not true for everybody, and the best-selling RZR is still the 800. Clearly performance, like beauty, is in the eye of the beholder or in this case the person with their foot on the pedal and hands on the wheel.

The new 2012 Polaris RZR 570 looks very much like the RZR 800, but under the bodywork is a chassis and engine that is much different than its older brothers. It’s as if Polaris lopped off and replaced everything behind the seats. It’s clear they are preparing for a second generation of the entire RZR lineup with a new chassis, and an engine designed just for Side x Sides. The new engine is called the ProStar and was first introduced on the XP900. A modular transmission is mated to the engine, and since the gearing and transmission is identical to the XP 900, Polaris must feel they’ve got it dialed in for most of their performance models. Polaris also gave the 2012 Polaris RZR 570 a liquid-cooled, 567cc, DOHC, single cylinder engine fed by electronic fuel injection and everything about the engine and transmission was designed for the load of a Side x Side, and to efficiently transfer power to the ground. We were very happy to see Polaris considered routine maintenance tasks with the new design as well, and it’s easy to access the oil filter, large dip stick on the right side of the motor, and the air filter. Both the CVT air intake and the air filter are located high in the chassis, which should help them breathe clean air and avoid sucking in any water. We especially like the flat, automotive-style pleated filter, which is right under the rear cargo deck.

The chassis of the 2012 Polaris RZR 570 is identical to the 800 at the front, with a radiator tucked under the bodywork for clean airflow, dual a-arms, disc brakes at each wheel, and 23cm (9 inches) of wheel travel. At the rear, the suspension is completely redesigned to cradle the new engine and the rear of the chassis is built from heavy-duty steel tubing with dual A-arms offering 24cm (9.5 inches) of wheel travel and a pair of disc brakes. Both ends of the new RZR 570 have a sway bar to reduce body roll in aggressive cornering and Sachs shocks dampen out the rough stuff. Polaris also gave the 570 new Ancla tires – 25x8x12 front and 25x10x12 rear – on stamped steel wheels coated with a tough, black finish. The most obvious feature of the 2012 Polaris RZR 570 suspension is the overall width.  At 50 inches wide the 2012 Polaris RZR 570 is barely wider than many full-sized ATVs, but it is also the only Side x Side that meets ATV trail legal limits practically everywhere in North America. That’s a huge advantage for many trail-loving recreational riders, and even sportsmen who need their machine to be trail legal, to get to their favorite hunting or fishing spots. A secondary advantage is that it can easily be loaded into the bed of a standard pickup. When you stop and think about it, the mere existence of the RZR platform helps maintain trails and encourages a return to a nature-conscious lifestyle.

Bodywork on the 2012 Polaris RZR 570 is identical to the rest of the RZR family, both inside and out, and thankfully the red plastic is pliable, tough, and hardly shows scratches. Just like other RZR models, the 570 offers a medium sized storage compartment under the front Hood, that easily carries a couple of tie downs, a few tools, a tire repair kit, or a small compressor like we usually carry. At the rear, is a tough cargo deck with many integrated tie down points and mounting locations for the Polaris Lock & Ride accessories, and there is even a receiver hitch with a 1500 lbs towing capacity.

FIRST RIDE – INTO THE TREES
Our first ride on the new RZR 570 was made even better by a perfect fall day with the Northern woods, in full color from the quickly changing leaves. We quickly hopped into our seat and felt right at home. The dash of the 570 is pretty much like any other RZR with a 4wd selection button and a center-mounted gauge that shows MPH, RPMs, fuel level, temp, mileage, etc. We were disappointed to find the glove box had been removed, to keep costs down, but the mounts are still under the dash so one can easily be added.  Once strapped into our seat, we fired up the engine with a twist of the key and found the new engine makes a nice rumble, thanks to the automotive style exhaust. After a quick warm-up we slipped it into gear and headed for the trails.

It didn’t take us long to find the new shocks were softer than on the RZR 800. Polaris changed the shock specs to make the ride a little smoother, but with two normal-sized riders we ate up the preload setting and were bottoming a little too easily.  At our first stop we cranked the preload up to the middle position, and this cured our problem. Now we could use the 25cm (10 inches) of ground clearance more effectively. As a little extra precaution the bottom skid plate is now almost twice as thick as on previous RZRs, and despite our abuse it did a great job of protecting the frame.

As we wound through the trees and down tight trails, it became very clear why so many love the 50 inch width.  It was a blast darting between the trees, and there was no way any wider Side x Side could make it down the narrow trails. The handling on the new RZR 570 is precise, responsive, and predictable. It’s a compact package, but it stays where you put it on the trails and we were even able to double through some of the whoops, with no side to side swapping. In muddy, slippery, or even sandy sections, the Ancla tires did a good job at finding traction, and we felt very little tire flex. We were having an absolute blast, but our biggest surprise came from the motor.

The new ProStar 570 engine delivers almost as much power as the 800! It was definitely far more responsive than we initially imagined, and is well-matched to the chassis. Clutching was very good and it was very easy to control through the trees, but in the open sections it would top out near 60 mph! That opinion was shared by everyone in our group and every time we stopped, riders were expressing their amazement at the over-achieving 570 engine. By late afternoon, we had all noticed one other thing; we were barely using any fuel. Despite having covered roughly 70 miles of trail, with our heavy foot and aggressive driving style, we had used only about a third of a tank. We’re not sure how far it would go, but unless you’re running a desert race, you can probably make it all day on one tank. We did that easily and probably had enough for a second day of fun.

After a full day of great riding under a perfect blue sky, we really understood how a seemingly small displacement model like the 2012 Polaris RZR 570 fits into the Polaris game plan. It’s an awesome, fun machine that packs a punch on the trail and works as a package. We also don’t think anyone will need power steering on this unit, since it handles so well already, but there are a few things we would like to see Polaris work on for future models.

We want the glove box back. We’ve always given Polaris plenty of praise for their storage, but taking away the glove box seems counterproductive, although we understand this was a cost saving strategy. We also would swap out the soft steel wheels for some cast aluminum wheels, that are usually much more durable. Finally, we think the shocks need to come with firmer dampening. It was a little too easy to bottom them out with two riders. At some point in the next few years, Polaris will also need to restyle both the exterior and interior of the RZR family. Competitors continue to refine their bodywork to be more automotive-like while the Polaris body has remained largely the same.

RZR WRAP-UP
Polaris has again struck gold with their new 2012 Polaris RZR 570. The new engine runs great, it’s nearly as fast as the RZR 800: its nimble, fuel economy is excellent, and at $11 399, the price can’t be beaten. Best of all, the fun factor is off the charts. We’ll gladly drive one anytime!