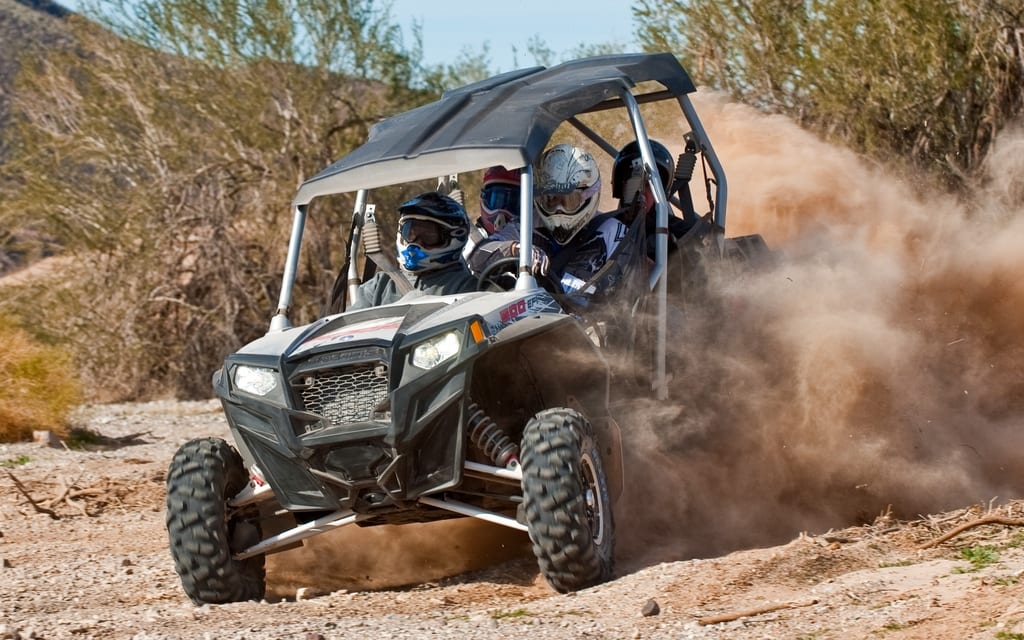 This is the newest member of the RZR family, which seems to be ever expandable. What will they come up with next, a single-seat version? Oh dear, oh dear, I might have just put my finger on something here! Still, for now, it seems that adding seats has become the norm. Few had imagined that such high-performance, small, sturdy, and inexpensive to run and maintain off-road machines, would ever come to be, let alone a four-occupant off-road buggy with race ready high-performance capabilities in an extremely safe to use family oriented package. The more capable the vehicle is at high speeds, the safer it is to use at a fun moderate pace. Trust us, this one has all you need to keep family, friends, or both; giggling, happy, smiling, at any time, in almost any place on earth, all-year round.

The RZR4 was truly an eye opener for many, and proved that such a vehicle could be offered, and that its users could enjoy fun paced trail riding in a very safe manner, thanks mainly to fast evolving and extra efficient suspension and chassis design. This much faster and more powerful family buggy simply brings this principal up a notch. Just as the RZR4 had been able to even better its predecessor, the RZR-S, in some aspects, this vehicle does the same in comparison to its source for inspiration: the RZR XP 900. Featuring the same fastest accelerating 88 horsepower producing engine and an even better suspension system, this new RZR4 XP 900, also profits from the longer wheelbase in a very positive way. It is simply a known fact that this trait can positively affect handling and also significantly improve comfort over certain challenges like uneven grounds, can throw your way. So much so, that the successful Jagged X off-road racing team entered a stock unit of this family-oriented vehicle, with a 12 gallon fuel cell placed where the comfortable rear seats are usually found, in the Parker 250, first round of the 2012 Best in the desert championship. We were lucky enough to attend this grand event held right in the middle of the Arizona desert, and witnessed the impressive machine taking 10th overall and 3rd in their class, despite suffering a flat tire that made them lose at least a half hour. Team owner and driver, Bill Schueler and his co-pilot, Polaris executive and UTV enthusiast Craig Scanlon, had gambled a little by not carrying a spare, keeping weight to a minimum and trusting that their tire balls would do the trick, but there was a big enough gash in the tire that they all ended up popping out. This means that they might have won the event, if that incident hadn’t happened. A true testament of the vehicle’s potential.

Better stability and more predictability are a few of the advantages that this 4-seat version of the RZR XP offers. The extra lengthy wheelbase works wonders to smooth out the bumps and whoops, enabling the driver to keep a faster pace in the rough stuff.

High suspension capacity and quality, is really the key element, which has made such vehicles possible and Polaris has been at the forefront of the development of such systems. This interestingly fast, yet safe to perform with vehicle, is graced with an industry first: standard 2.5” body Premium Walker Evans™ rear shocks with huge piggyback reservoirs, which provide an incredible 14” of suspension travel with the extra volume needed to dissipate heat efficiently. With 142 victories and 21 championship titles to his name, Evans is one of the most accomplished competitors in the sport of off-road racing and continues to entertain off-road racing fans, whenever he drives his Baja ready Chevy truck to victory and his Company’s products, mainly the high-performance suspension units they make, are a key part of this continuing success. The 3-Link Trailing Arm IRS, combined with these Premium Walker Evans™ shocks, work together to create an astounding 12.5” of ground clearance, a clear advantage when it comes to conquering terrain with more confidence, clearing rocks, bumps and deep ruts, with surprising ease. Directly inspired from the off-road racing world, the 3-Link Trailing Arm IRS is a proven, strong and durable design, with minimal parts used to keep the weight down as much as possible. It features two small diameter rear control arms and much bigger far forward-connecting trailing arms. The suspension’s radius rods feature uneven link geometry and extend deep into the wheel hubs to optimize camber. This allows the tires to lean into the corner throughout the suspension travel, and plant more tire surface on the ground for maximum control.

The potent acceleration provided by the 875cc fuel injected and liquid cooled engine is just one of many things that truly set these new XP 900 models apart from others. It actually becomes an extra tool, which can be used for control. It is strong enough to force the vehicle into a certain position or to lighten the front and smooth out certain asperities in the terrain just ahead. What makes this type of vehicle so appealing to a safety-conscious bunch like us is that the suspension, low center of gravity and highly stable character in general, regardless of what the riding conditions are, enable you to use the entirety of this impressive power output, without putting anyone at risk. Actually it has a tendency to make you forget that you have all this added weight, when the ride is full of passengers. Their giggling soon reminds you of their presence. Still, again, acceleration is the toy to play with, not top speeds! In our book it is ok to floor it but irresponsible to let the vehicle climb well over your area’s speed limit, if there is one. The speed limit for OHVs where we were is 15 mph within 50 feet of any camp or group of people and within 500 feet of highways, roads, campgrounds, etc… This basic speed law applies everywhere-Don’t drive faster than is safe for conditions. With this gem, that’s pretty much always at a pretty cool pace.

Our testing loop in the desert included some of the BITD’s race lap. In other words, some of the toughest and rocky conditions you could ever punish a vehicle with! My LE version of the race savvy family buggy, performed absolutely flawlessly! It was incredibly easy to steer, thanks to the added Electronic Power Steering unit, and the Maxxis Bighorn tires proved themselves extremely Tough, considering the amount of sharply edged rocks I threw around and rolled over. No flats! Even after many hours of relentless punishment. Luckily, we also rolled on some nice, flat and wide dirt roads, where I felt like I had died and gone to heaven. Rally racing that thing, felt like I was a championship winning racer, something this vehicle seems to be able to turn anyone into. That’s how easy to operate and predictable it felt. Seriously, this ride is nothing less than fantastic! It permitted this racing style pace, and the suspension suffered minimal fading effect. Oddly enough, this XP might very well be the best performer of the whole RZR bunch, even surpassing the highly successful two-seater version in many ways.