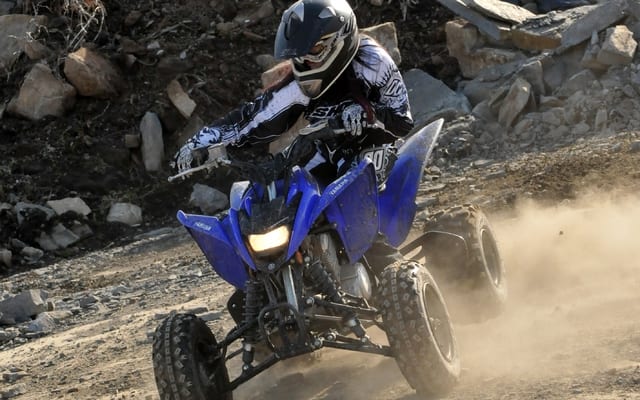 The gap has long been too wide between kids sized ATVs and the rest of the pack. Maxing out at 90cc and quickly outgrown in dimension, those smaller quads lose some of their appeal, as the young rider grows out of it quickly and is tempted to beg for access to the larger family quad. Regardless of what the warnings are clearly stating, let’s face it: a lot of people just give in. Parents willing to encourage their child’s interest in the sport were left with very few options for their child to continue to evolve into a responsible teen ATV rider. Some would opt to buy Taiwanese or Chinese built youth rides of intermediate size, but might be somewhat disappointed in their unsatisfying quality. This was a great shame, as many parents are convinced that those teen years are crucial in a rider’s evolution as a responsible and well-trained motor vehicle user. The 2011 Yamaha Raptor 125, fills the void perfectly.

In a perfect world, where nobody ever gets hurt, parents supervise the play and learn exercise, whatever the activity. Regardless of rules, they are the ones who decide if their kids are mature enough to operate any given contraption, motorized or not. Parents let children down a snow- covered mountain on two precariously controlled planks; let them use their bicycles unsupervised on streets shared with huge cars and trucks that could very well crush them. Just heard of some kid breaking his leg while playing basketball in gym class; should we ban sports from schools, or ban kids from using skateboards, rollerblades or bikes on streets to protect them? ATV riding certainly has its share of risks, but when we take a closer look, we quickly realize that this particular activity, when practiced as prescribed by the experts, can actually be much safer than most of the other  sports I mentioned before. Simply because the potential for getting hurt is taken more lightly in some of those situations, and protective gear is generally not even bothered with when no engines are a part of the equation.

Get the kids involved in riding a sport ATV like the beautiful 2011 Yamaha Raptor 125, and the mere presence of the vehicle before them, will force a certain degree of respect. Prudence will come instinctively, even for a very young child. The equipment and gear are much more imposing, which will also encourage a greater sense of seriousness and responsibility. Soon into the experience, the child will enjoy the benefits of self-accomplishment, feeling like he had just won a hockey game after riding for just a few minutes, smiling profusely. The greatest aspect by far, is that the child will get a great deal of enjoyment, while almost unknowingly learning crucial things about motor vehicle operation, like the effects of changing ground conditions. It can also become a good tool for learning about life in general for that matter; with things like developing a sense of responsibility and learning about the environment by experiencing its benefits hands on.

The quality of this affordable mini sport quad is truly obvious as soon as all the controls are operated. My illogical size didn’t stop me from trying it out of course, despite the fact that merely sitting on it had a clownish effect and every witness on hand for this photo shoot/ATV training session, was laughing at me. Noémie, my girlfriend’s ATV hopeful 16 year old daughter, was all geared up and first to tell me how ridiculous I looked. She only had one thing in mind; making me feel embarrassed enough to get off, so she could have her go on the Raptor. Trying to keep my serious face, a must since this was her maiden voyage into the off-road world, I instead asked her to pay attention to my body position in relation to the quad. First in a stop position, and then rolling slowly in first gear and swaying my bum from side to side, as I slalomed around imaginary cones. The last thing you want to do is let an over-exited newbie get on and just blast off into the distance. So, I warned my student that rolling beyond the boundaries previously agreed on, would result in ending this cool activity. Eye contact was also necessary to make sure crucial information was getting through.

Don’t forget that this activity can become appealing enough to kids, that the parents can manage other aspects of their kid’s well-being. Once they are hooked, parents can use that cool little machine they like so much, as a reward for other accomplishments. Do well in school all week; get to ride on the week-end sort of thing. Ok now enough convincing the ones that are not already familiar with all the positive aspects about kids riding ATVs. Many of you are rather anxious to know everything there is to know about this great-looking new little trainer. Yes, this ride sticks to basics and that’s just dandy! We wouldn’t have wanted it any other way. Operating a manual clutch early on is very good for young riders aspiring to become true sport riders.  It will be a breeze to get used to, with this vehicle’s very smooth and reliable 5-speed manual transmission. It was great to discover the pull on the lever to be quite easy for those small fingered newbies.

Also: the lever was positioned close enough to the grip for Noémie’s tiny fingers to wrap around it comfortably. The engine’s torque output and wide power band means that mastering this operation is made very simple, since the quad won’t stall if the lever is released slowly enough, with no press on the accelerator at all. I absolutely loved the big park brake lever placed right on top of the clutch lever. All quads should have one like that! It works way better than all of those tiny locking mechanism, which often need both hands to engage. For efficient braking, the 2011 Yamaha Raptor 125 has dual hydraulic discs up front, and a single one for the rear. In large part because the ride is so light, you can almost literally stop it on a dime. Like with any other Raptor, the brakes feel precise, yet are just smooth enough to prevent wheel lock-up, and give true control at your fingertips.

The Raptor 125 truly felt like a strong, agile and well-built machine, much like all of its bigger brothers. For those who are ready to step up from a smaller model, at a reasonable $4,599 MSRP, the 2011 Yamaha Raptor 125 is the perfect choice that offers both great performance, and the high quality that you would expect from Yamaha. Aggressive looks, electric start, a logical power output, which is surprising for such a small engine, make it ideal for beginners also. It has just enough pull for exciting bursts of acceleration, but won’t send your front tires up the air, unless you give it some help. This new Yamaha 124cc engine, which is based on the TTR 125 dirt bike features a two valve, single overhead cam, and has a broad power band. Actually, this cool little ride is, pretty much, spot on in terms of balance between power and handling. The 2011 Yamaha Raptor 125 features 7.5 inches of front wheel travel and the same a-arms and suspension components as the Raptor 250, with 5-way pre-load adjustable shocks. This means that it can accommodate a wide range of differently sized riders, who can all enjoy a very smooth and comfortable ride.

The 29mm Mikuni BSR Carburetor offers a light throttle effect, to reduce thumb fatigue for all day fun. Shock covers, skid plates, a-arm guards, bumpers, grab bar and heel guards, complete the package nicely for long term sturdiness. A most significant aspect to consider; is this quad’s very low weight. One wouldn’t think it could be so good in the very damp, springtime, half snowy, half muddy trails I tried this toy in. Sure I had to get off the bike a few times but I could single handily prop the thing out of the ruts and get back into the action, giggling through it all. Truth is, I had great fun despite my ridiculously, too large body for this ATV. I think that is what makes this whole package such a great one.

This ride can be appealing to a broad range of user types, despite its compact size. I can certainly picture a few family members fighting over who will get the Raptor, even if it is, just a 125. Personally, I would have liked to see it with a bit wider stance, but then again it is inspired by the Raptor 700, not the track ready YFZ450. The Raptor is more of a trail ready sport quad, than an all-out racer, and the 125 uses the same chassis as the Raptor 250, which is also set-up for the trails more than an MX track. If we are lucky enough, Yamaha will also come out with a YFZ 125 or 250, or even better; both, at some point in a not too far future. Oh yeah, and as for Noémie; she’s hooked!