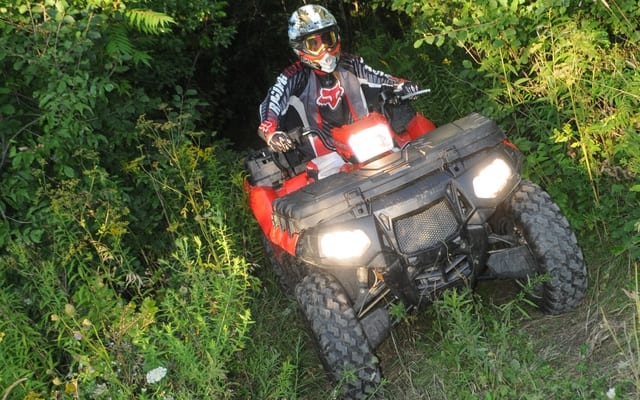 It looks like any other quad when you cross paths with one on a trail, but you might think you are crossing paths with a different one the next day, as it rolls smoothly by with a person in the back, instead of a full load of cargo. One very clever design element makes it very unique; giving it the ability to multi-tasks like no other ATV on the market. Claimed to be the most versatile ATV on the planet by its maker, the 2011 Polaris Sportsman X2 550 is transformable from a perfect utility ATV with a large tilt able rear-cargo box, into a comfortable touring ATV with passenger specific wheelbase, rubber-mounted vibration-reducing foot rests, and confidence friendly grab handles.

It is no surprise that the 2011 Polaris Sportsman X2 550 has been a huge success story for Polaris. Introduced in 2006, it offers a passenger backrest, which folds and tucks itself underneath the rear cargo box, to keep cargo capacity at a maximum, when only one rider is aboard. This cool and practical ability can mean a great deal for many every-day ATV users, like ranchers or farmers who are also avid trail riders, when they get a chance to. The transformation takes about as much time as saying: It’s also a Two-Up quad! A quick quarter of a turn of both knobs behind the backrest, and you can flip it out of sight, and under the cargo box.

This particular Sportsman model should be of serious interest, to people who can only afford one ATV to serve them, as well at work than at play. The Sportsman X2 550 had considerable improvements done to it in 2010, with a new engine, transmission, chassis and much, much more. Despite the great number of dossiers on the Polaris R and D’s desks for 2011; with a large number of new models and a wider line of products to tend to, they took time to take a close look, at what could be improved on this popular and important model. The result is a 2011 Polaris Sportsman X2 550 with improved splash protection, an approximate 12-pound weight reduction, STX seat vinyl, a new digital/analog gauge and Maxxis® tires.

In 2-Up mode, the 2011 Polaris Sportsman X2 550 performs in a re-assuring fashion for the passenger. The XP inspired chassis, now also used for this model since last year, improves comfort and safety, with its ground hugging, and race , or intense trail rider-inspired performance objectives. Truth is it can ride well and safely at a much higher rate of speed than many quads on the market today; since it is designed to be thrown around much more intensely, by the much more powerful Big Bore 850 Polaris twin engine, now also available in an all-new Sportsman X2 850 LE choice. That one offers more power than is normally needed for the average ATV user.

The only thing I don’t quite get is that the 2011 Polaris Sportsman X2 550 doesn’t come equipped with the new Polaris Electronic Power Steering. It would be one of the most logical quads to equip it with, but at least it offers anti-kickback steering, that performs well at taking the wrist-snagging bite out of bumps and ruts. Not to mention that it is really easy to steer without any assist, for such a large ATV. Beat me with a stick, I did what I’m always telling you, the reader, not to do with such a large utility specialized ride and I pushed the thing like I was in a GNCC race! I had my friends keeping an eye out, permission to do my thing from the Saisons Express guys, and was already very familiar with the Sportsman XP feel, which has now found its way onto almost every model in the Polaris ATV line-up.

If you are just planning on riding 2-up most of the time, the 2011 Polaris Sportsman X2 550 is a good choice, as it possesses the same elongated wheelbase (144.8 cm) as any other Polaris Touring units. Although the passenger’s comfort is not as extreme, it is still comfortable enough for long rides. Personally, I prefer sitting in the back of this 2011 Polaris Sportsman X2 550, than on any of their Touring models. I like to be able to feel the machine as much as if I was the one at the commands, and the comfort ride suspension (small suspension system added to the rear seat those rides) takes a lot of that away. I’m not saying that ingenious system isn’t any good, but it does make the feel of riding the back of an ATV totally different.

Besides, the 2011 Polaris Sportsman X2 550 now has 21% more seat foam, for a total of 4 inches of seat padding. The new STX seat vinyl is also nice. The seat is shaped upwards at the rear to keep the operator from sliding back and coming into contact with the cargo box. That is actually the only small difference felt between riding this quad and any other Sportsman in the XP chassis, when pushing the ride hard.

Equipped with a more than decently powerful 549cc liquid-cooled twin cylinder engine, with Electronic Fuel Injection (EFI), the 2011 Polaris Sportsman X2 550 can hold its own, in about every situation to be found on any trail. EFI significantly improves this Sportsman’s slow-speed drivability, making the vehicle more responsive and reliable when navigating off road terrain, which demands sudden and extreme changes in power, or precise variations in speed. It also makes the vehicle easy to start, no matter what the outside temperature is. It is important to mention that our friends at Polaris had no problem with us keeping this unit for a long time. We have been enjoying its practicality and reliable demeanour for the entire summer and are yet to bring it back, still enjoying its excellent conquering abilities out in the snow.

Among the qualities that stood out during this long testing period was the PVT transmission’s performance. Continually sensing engine speed and vehicle torque load to provide the proper amount of power to the drive wheels, the Polaris Variable Transmission is both smooth in operation and reliable, but this doesn’t mean you should neglect its maintenance. As with all such belt driven systems, it is a good idea to take the cover off, and give it a thorough check-up after about 100 hours of use. We pulled the easy to spot and to remove red drain plug at the bottom of the cover and nothing came out, despite the fact that we had thrown it in as much mud and water as any. For some odd reason, some of us love to do so. Infiltration is a very rare occurrence with all these XP generation Sportsman quads, and removal of the cover for maintenance requires less work than on old models, since the engine is mounted longitudinally, and the PVT’s cover ends up turned 90 degrees facing the rear.

Taking the left rear wheel off suffices to get access. You could just bring it in for service, but it’s almost too easy of a task to not do it yourself. If you operate the vehicle only for work, at low speeds all the time, it is best to use the Low range. That will prevent the belt from always working at the same spot, near the bottom of the drive clutches, and will help wear them, as well as the belt, more evenly. It is also best to slip it in park every time you stop, to prevent flat spotting the belt and overheating it at one spot.

Just about the only aspect that didn’t change from the older Sportsman rides, is the gear selector and I’m really glad. Its operation is simple and quick. It needs no side to side movement to travel through the available L.H.N.R.P., which is totally fitting for such a work-oriented machine. In its hard-working utility mode, the Sportsman X2 550 truly shines! In addition to the practical high cargo capacity, traits like a very tight turn radius, a very comfortable seat, and access to many different traction modes at your fingertips, make the X2 very user friendly and efficient in any sort of work environment. The VERSATRAC system enables the rider to choose 2-wheel drive, On Demand All-Wheel Drive (AWD), or Turf mode, which keeps the rear differential opened by a simple slide of a thumb switch on the right side of the handlebar. Turf mode will minimize damage to soft terrain. When the On Demand AWD is chosen, the system automatically engages true all-wheel traction when the rider needs it, and reverts to 2WD automatically when it is no longer needed. The entire system works like a charm in all conditions. You get decisive and quick engagement when needed, yet in a smooth and seamless fashion.

In conclusion, I have to agree with what anyone at Polaris would tell you; you can’t find a better machine for versatility and performance! If you were looking to buy a bike that was made for touring in trails, this one has the longer wheelbase made for a smoother safer ride, but can also do just about anything else any ATV could ever serve to do. This quad is always ready for anything; without the need for any added accessories, and no matter what type of ATV usage you want to enjoy. It is what you want it to be, at any given time. The biggest plus is that this ride can carry anyone, worthy of the wonderful experience of a relaxing trek in the great outdoors, easily and safely. I’m still going to suggest a few possible improvements: standard bumpers; or maybe just a grab handle at the back, like you always see on sport quads, for when you need to manhandle it out of a dirty predicament.