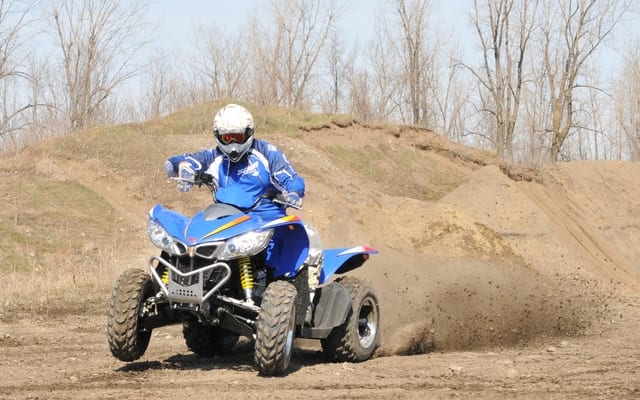 I have to admit being more satisfied lately, with KYMCO’s progress in designing sound machines, able to satisfy even us, very demanding Canadian trail riders. Too bad ATVs aren’t legal to use on roads. This would be the cutest little thing to commute to and from work with. Turn a few heads downtown with some brushed aluminum-style accents, a bit of German influenced bling, and then hit the woods to get down and dirty. Someone, please explain why this can’t be.

In the past, Taiwanese made rides have had the bad habit of frustrating the hell out of us with all kinds of problems. Not necessarily major, but many times serious enough to cut short a fun ride on the trail. Out and about, in the middle of nowhere, is the last place one expects to be doing stuff normally taken care of in the warmth (or coolness) of his or her own garage. The chassis is pretty much identical to the MXU 375’s IRS platform, developed in partnership with Arctic Cat, and introduced in 2010, which became critically acclaimed for its great stability and all-around good performance.  With its generous ground clearance, aided by the IRS suspension and a competent 4WD system, the KYMCO Maxxer 450i becomes an even more interesting choice for any trail riding enthusiasts on a tight budget.

As far as looks are concerned, this one truly takes the cake. It is nice to see such a fresh and original look, with influences seemingly taken from anywhere but competing ATV manufacturers. Stylish and colourful, the Maxxer 450i also gains in advanced technology, with a new Electronic Fuel Injection system, which gives it a crisp and smooth feel at the tip of the thumb. The 2011 Kymco Maxxer 450i new injection system feeds an optimal fuel air mixture in the engine’s combustion chamber. It is preferred to the carburetor for improved engine performance, in all weather conditions and at any altitude. Improved fuel economy, lower emissions and extra low and mid-range power can also be expected.

While the 375 lacked a bit in power, this quad seems to have just the right amount to make it truly fun to ride on IRS sport quad. I might have appreciated a tad quicker response when getting on the gas, but it was more than enough for cool power slides out of turns, and getting the front end lighter, when needed. The wide stance is well complemented with an easy to steer front geometry and nice long handlebar, which must also contribute to make it so smooth and easy on the arms by minimizing bump steer.  No need to push in, the very basic but ok to work with 4WD button, easily reached with the right thumb. The rider can shift from 2WD to 4WD on the fly and at any speed.

Throwing it around was a breeze and the entire package felt solid, as I took flight over numerous bumps on my path. One bump or jump at a time, the ride felt perfectly fine, and it flew as well as it rolled, very stable and predictable. I did find its limits, when the going got tougher through series of bumps, but it is important to point out that I am pretty oversized for this quad. Toning down the pre-load on the springs would have helped smooth things out, but that is something I couldn’t really do, given the fact that I was almost constantly looking for a chance to jump with the machine, since it did that so well. As set at the factory, halfway up the choice of five positions, it only bottomed out in the front when I would land on the back wheels and slam the front to the ground. So I was actually pretty impressed with the suspension’s performance in general, considering I represented an unfair challenge, in comparison to what and who this ride was intended for. On flatter grounds, this ATV rode perfect. The rake and steering angles were aspects slightly revised to the front geometry, to achieve sharper manoeuvrability and I couldn’t ask for better on that end.

The 2011 Kymco Maxxer 450i offers really good comfort for a sport-oriented ATV. Despite my body’s generous dimensions, the riding position felt natural and gave even a big boy like me, room to move. I did hit my left knee on the sharply squared shape of the plastic a few times, where the drive mode selector is placed. But here again this shouldn’t be a problem for normal sized riders. I sometimes wish I had a five position adjustment on my weight and height; I would surely be dialling myself down to the lowest available settings. I guess 5’10″ and 200 lbs. would be nice. At that size, I’m guessing I wouldn’t have ended up on the rear half of the seat so much, which has much less thickness than in the middle and up front parts of it. Still, I never really felt this quad was designed with smaller or younger riders in mind. It was ergonomically adaptable to many sized riders. To make sure, I asked my girlfriend’s much smaller 16 year-old daughter to hop on and she said everything felt at its place, even the brake levers, which weren’t set too far from the bar, meaning she could wrap her short fingers around them without too much stretching involved.

I guess I shouldn’t have left it on the “N” position. Poor thing, I cracked up as she repeatedly squeezed the left hand side lever, gave it some gas, let go the lever, gave it gas again, glanced down on the left side, and turned her head towards me. Poor thing had the cute reflex of grabbing for a clutch lever. None can blame her, of course, her only contact with ATVs had been a one day crash course for newbies on a manual transmission equipped Raptor 125. Hilarious! I didn’t say anything just yet. Let her figure things out a bit. “It’s not working! She yelled. “Where is the shifter?” “What’s so funny?”

When I finally gathered enough pity, I explained how much simpler it would be to use this quad. This one uses an automatic CVT type transmission and so she could concentrate on just the riding. She right away noticed and pointed out how easy it was to operate the shifter. Surprisingly, the smoothest drive mode selector I have ever had the pleasure to operate. The guiding slots for it are huge and the futuristically shaped handle glides like a puck on ice. The lack of flexibility in the plastics remains one of the most noticeable disadvantages found on most Chinese and Taiwanese motorized creations, and this ride was no different. The vehicle already had some cracks here and there when we picked it up at the dealer, mostly where the brackets that hold it in place are. Can’t be sure if that is because the plastic isn’t malleable enough, or if the design of the brackets is at fault; we don’t really like the idea of rolling a quad, just to see where and what plastics get damaged. Bending things around a bit did reveal that beefing up the amount of plastic moulded at every joint, would surely suffice. Then maybe the bars holding it up would start to bend before the plastic turns white near the anchor point.

In conclusion, I must say this is the most fun I have had so far on a machine out of Taiwan or China. It is very refreshing to see that KYMCO has not been copying anything on anybody with this hot looking ride. Every little detail is unique in its design and function, except maybe for a few common things like the same type of simple push button 4WD control almost every ATV out of those countries seem to use. The open top U shape of the lower suspension arms I found to be quite intelligent. Why not keep those from trapping water and hiding rust build-up over time on the inside. They are easily cleaned up and achieve their function without compromising strength. The multi-functional LCD instrument panel is sleek while offering all the necessary information, in a clear fashion, in the bright of day or dark of night. The 2″ hitch receiver, which is usually absent on such sporty machines. Affordable, strong on most points, this model clearly displays how KYMCO is serious about making their products better and better.