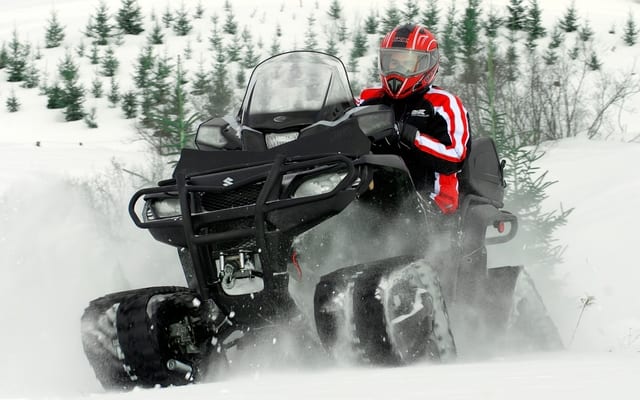 I have been telling myself for years that I would like to try out an ATV equipped with tracks, to verify if they are as efficient as they look. When Alain, our Editor in chief, called me to say we were about to test some tracks by the name of Commander WTX, I was thrilled at the prospect and thought installation of this accessory would be as quick as installing four new wheels on an ATV. Small appreciation error on my part…it took much longer, but once installed we were in for guarantied pleasure on the trails!

So, a rendezvous is set, I am to meet Alain on the South Shore of Montreal, in order to pick up and test the test ATV. It is a yellow 500 cc Honda Foreman, not the fastest on the market today:so our objective is to do our testing on an intermediate displacement vehicle, in order to evaluate, in a more objective manner, the effects of these tracks on the top speed and maneuverability of the quad. Upon Alain’s arrival, I load the vehicle onto my trailer, while Alain removes the tracks from his Toyota Supra. I wonder how he managed to fit them in there, for the WTX tracks are quite imposing in size. Now that I am in possession of the tracks, for ATV, and all the necessary accessories for installation, I head for home, my garage being ready to admit these newcomers into the family.

As I mentioned in the introduction, I mistakenly thought installation would be done in a jiffy. In all honesty, I would recommend having this work performed by an experienced mechanic, although not necessarily one with a diploma. If you are more at ease with a pen than you are with a screwdriver, give this job to your dealer or to a qualified mechanic.

Installation:
This is a first for Alain and me, as well as for me, so it is a good thing for us to be two for the job, as these tracks are actually quite heavy. My first advice, if you choose to do the work yourself, is to sort out all screws and accessories before starting. Instructions indicating the size and model of the screws should be followed as closely as possible, as the number of screws greatly exceeds what I was expecting. Furthermore, there is a good number of parts to assemble. One detail that would have been useful to know is that the hardware for the TREK model tracks is also included, which at first, seeing the number of parts scared us a little. Instructions included the steps to follow for installation of the TREK tracks, as well as for the Commander tracks, all in one and mixed. We eliminated the steps pertaining to the TREK tracks and things were much clearer. However, neither the plastic bags, nor the different parts contained were identified. A definite complication.

Ready to start work, we secure the ATV on sturdy 1 000 kilo-proof props, very sufficient for the weight of a quad. We decide to start with the front end where we have to remove the wheels and the plastic protection on the A arms. Up till this point, everything seems quite simple, but the actual installation seems more complex. Several trials were necessary to assemble the support parts to the wheel hub. Of course I’m certain that for those who have done this job several times, it become child’s play. The A arm protection parts that come with the Commander WTX tracks are of the indestructible type, made of thick metal for optimal protection. I know, off the bat that this kind of protection won’t give in easily, but for a very violent impact, no long term test is necessary to determine that fact. Between the A arm’s  protective parts and the frame of the front tracks, a certain type of shock absorber with built-in rubber cushions, acting as an anti-torsion bar, must be installed. Those shock absorbers will improve the smoothness of the ride and, in my opinion, will reinforce the whole system in direction changes.

At the rear, the protection plate under the chassis of the ATV must be removed, to be replaced with the one supplied with the Commander WTX tracks kit, same as in front, all very sturdy. This type of protection is high impact resistant.

Both the front and the larger back tracks are held in place with a universal wheel hub, reinforced by bars with rubber cushions tied to the protective plate under the ATV. It’s true that with practice things become more simple; we installed the tracks at the back in half the time.

Once the tracks are installed, this Honda Foreman has a much more imposing look, the difference is amazing, it is much higher, much wider and longer, I really love the feeling!

One point to make note of, is that if your ATV was a tight fit on your trailer before installing the tracks, it might not be possible to load it with the tracks on. Make sure of the measurements.

Testing :
So now, we are ready to try out this new vehicle. I say new because this Honda Foreman looks really different and as I sat on it, I got the same feeling as getting on board a new quad. Like, how am I going to tame this beast?

Now, let’s get down to serious matters. I open the garage door and look onto this magnificent snow bank just in front of the house, the type I would not think of taking on with any wheel equipped quad. Cautiously, I move forward and push the gas a bit, just as the front wheels touch the snow bank, and the ATV runs over this first obstacle with great ease, as a first smile comes onto my face. I say first smile because during this test period, many others were hiding under our helmets. We move into an area covered in fresh deep snow, enough to stop any vehicle mounted on wheels. No need to ride 100 kilometers to notice the efficiency of the Commander WTX tracks, surprised as I was in many instances, in all honesty, that this vehicle seemed to float on the snow surface. Certainly, one has to get used to this type of riding, for it’s a change compared to a vehicle on wheels, aside from the fact that the landscape ridden on is different from the usual paths. The fact that the size of your vehicle has been modified with the addition of tracks should be kept into account, especially on narrower trails.

Product specifications stipulate a reduction in top speed of some 35 %, our test vehicle showing a decrease closer to 40-45 %. One must bear in mind that this type of accessory is not designed for speeding or racing, but rather as an accessory to get where you want to go, without anything, or almost, to prevent you from getting there..

In conclusion, one can say that the Commander WTX tracks really deliver, as long as you have a need for such an accessory, or the desire to ride in locations where its use is allowed. With a retail price of $3 449 for most applications, and an adaptation kit in the range of $549.99 till $699.99, it is nonetheless a non negligible investment, compared to the purchase price of an ATV. But for such a price, your ATV will take you to the most inaccessible locations, in full safety. And I can tell you a great amount of pleasure will be included in this price. So, remember to ride safely in authorized locations, and good riding to all…