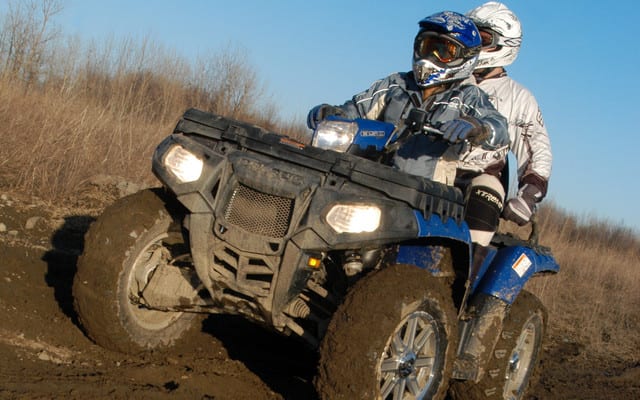 The Sportsman has long been an able off-road machine, but with its most recent major transformation into the XP form, a 99% change from the more than respectable 2008 model. It not only became the best piece of machinery Polaris Industries has ever built, but it also thrusted them to the top of the still fairly young sport-utility high performance ATV realm. Making these new innovations available to the two-up category with this new 2010 Polaris Sportsman 850 Touring was the only next logical step forward for Polaris Industries. One short ride on this fine-looking quad suffices to convince anyone that all these new XP style features can also greatly improve the two-up riding experience.

Merely using the new XP form wasn’t enough for Polaris engineers, which are always looking for ways to put up the ante and leave the competition trying to catch up. So in keeping with this ride’s obvious focus on trailing comfort, they bolted in their new electronic power steering system as standard equipment and came up with an ingenious idea for an additional small suspension system solely for the passenger seat. It’s even preload adjustable to five settings like all other shocks on the ride! As big and tough as you may be, you can’t help but find this little red shock, the cutest thing ever on a quad. Maybe that’s why the Polaris guys cut out some plastic for all to see at all times.

Like a stretched out 850 XP
This 850 is identical in dimensions and features to the 550 version, both are of course six inches longer than the single seat XP’s, with all the great XP features we so love, and then some. 14-inch aluminum wheels, the largest in the industry, which enabled Polaris engineers to improve ground clearance while minimizing the angle in the A-arms of the rolled IRS (Independent Rear Suspension) system is providing 25.4 cm (10″) of travel and new front double A-arm set-up with 22.9 cm (9″). That combination makes for much improved all- around handling, more noticeable while pushing it hard, without a passenger, of course, in high speed turns. Other major XP style improvements important to point out include a longitudinally-mounted engine (like on a Honda), making room for a much narrower and sporty feeling mid-section, which leaves a lot more room to move your body around. Smaller sized riders won’t feel like they are straddling a horse as much. After sundown, we noticed a few other things we liked. Contrary to last year’s two-up Sportsman 800, all three lights can be turned on with two beams pointing forward and the third one mounted on the handlebar providing light in the direction you’re pointing to.

The old classic style big round analog speedometer is also replaced by a much easier to read large LCD display, which efficiently glows orange, for a clear view of the black digits, day or night, without creating too much glare that could become distracting. Another very small, but significant improvement, is a smoothed out and rounded thumb throttle casing also used for the traction mode selection slider switch just mentioned. The old one could tear through any quality glove in no-time with its edgy cap.

Of course, there are a few things that were great about the old Sportsman that are still used with the newer model. The presence of ADC, a system designed for steep descents, is more than welcomed when giving a friend or loved one a relaxing ride. Engine braking is then applied to all four wheels, instead of just the rear, and the CVT stays hooked at a lower ratio forcing the heavy ride to crawl down at walking speed. This makes these kinds of obstacles much less unnerving for both the rider and his or her passenger. The ADC (Active Descent Control) can only be operational if the ride is rolling under 24 km/h (15 mph).

Easy to use, easy to get carried away
Seemingly leaving others behind and having to catch up on the aspect of comfort on the trails, the all-new Sportsman 850 Touring EPS from Polaris redefines how smooth and relaxing ATV trail riding should feel when riding two-up. Everybody in the industry, even the competition, had to at the very least, agree that the handling and all-around performance of the new XP chassis brought forward in 2009, were a very impressive improvement of the older Sportsman models. Those were the two main things we most appreciated about it when we first made contact with one particularly fine-looking shiny dark metallic red 2009 Sportsman 850 XP unit. Boy, did we ever have some good times with that one!

Despite the fact that this ride is specifically designed for two-up riding and is graced with some impressive utility capabilities, all-out sport riding seemed only natural at first press of its thumb throttle, just as it did on the single seater 850 XP.

A trait which may end up being hazardous, if one neglects to take into consideration the presence of a passenger on the back seat. Fact is that there is no, and never should be, such a thing as two-up sport riding. Even more concerning is the fact that certain less experienced riders could be fooled by its ease of operation and end up climbing at speeds normally reserved to racers on a grueling GNCC track, without even realizing how much danger they are putting themselves and their passengers in. I, for one, felt perfectly confident in my ability to read the trail without the feedback normally felt through the handlebar and had more than my share of effortless fun, without any risk taking. To give you an idea of how much assist the EPS system provides at very low speed, you can steer it with one finger when it is parked. Of course, the system provides less and less assistance as one goes faster, but in general it just keeps this same very light and easy feel at all times.

Not only does the new Electronic Power Steering system make turning completely effortless, but it also eats up most of the kickback normally created by impacts of one wheel or the other. At low speeds, this makes the ride safer, as the operator can react better and grind his way in and out of ruts much more easily and efficiently. This liberty of movement of the wheels also proved itself practical in a few extra snowy outings. The old Sportsman Touring 800 could still hurt your wrist pretty bad when you hit a hidden obstacle under the deep snow; this one here, did a great job at decelerating the bar enough to protect them.

At higher speeds, the EPS does make the whole ride a bit less predictable and so this stays a machine better suited for experienced riders. Then again, the mere presence of the 70 HP 850cc SOHC Twin Cylinder EFI Engine, should suffice in convincing anyone to be extra careful with his or her thumb’s temptation to push hard. We are actually very glad Polaris decided on offering a 550 version of this ride, certainly a more logical choice for most weekend two-up riders.

The new Sportsman Touring capabilities in high performance riding, do make the entire trail experience a much safer when the ride is kept relaxed and well below the threshold of when things normally start getting risky on a two-up. It is only logical to think that if this quad can negotiate a given curve safely and with ease at 70 km/h, the machine’s stability will be extra safe at 40 km/h in that same turn. Despite that, no one should tempt faith and try to figure out how fast it can be negotiated when with a passenger. I thoroughly enjoyed the generous dose of stability this ride provided at logical cruising speeds. It was obviously contributing a great deal to this ride’s high level of comfort for both the operator and his guest. Oh yeah, and I don’t think I’ve ever felt a plushier seat under me, it’s absolutely perfect, as is almost everything else on this quad.

Sportsman toughness and strength, still on the menu
On the practical side, the front storage box, only available as an add-on on the single seat 850 XP in 2009, was added here as standard equipment. That compartment remains a bit tight to carry more than a few tools and practical trinkets. Still, it is important to point out that no other quad offers as much dry storage space and that this box is kept low, so it can also serve as a front rack with 55 kg (120 lbs) of load capacity, while the rear will accept no less than double that amount. The tow hitch is also rated quite high with a 680.4 kg (1500 lbs) capacity.

If you are out there on your own, or simply putting this pick-up/tractor looking monster to work with hefty chores, all that power will come in handy and provide a tad more precise feel under the thumb in extreme situations. I felt I really got great traction from the impressively versatile big 26″ Maxxis tires (8″ wide up front and 10″ in the back) in very varied conditions. The large shiny 14″ cast aluminum wheels worked wonders at keeping the ride up and over everything with 28.5 cm (11.5″) of ground clearance and making the bulky and square design look sportier.

The CVT’s engine braking capability rendered the hydraulic disc braking system at all wheels, useless. When merely traveling forward and back repeatedly within a construction site for example, this feature is complimented by the EPS (Electronic Power Steering) to render the workhorse easily operable with just one hand. Going from Reverse to the Low mode on the superbly functioning straight line shifter is quick and easy while all the other controls seemed perfectly placed and function perfectly. Only one exception though; the rear brake pedal is still placed way too high for my taste and use of it at higher speeds didn’t feel right, as the wheels tend to stay locked.

Two-up bliss
In conclusion, I also feel it is important for me to mention how this ride revealed its very real and impressive racing abilities to me, when I pushed it to extremes on more private grounds, with the back seat snapped off with a simple pull of a strap behind it. I quickly realized that this larger quad (6 inches longer than the 850 XP), actually felt like a more perfect fit for my 6’3″ high body. With the desire to share the ATV experience, I invite a given person to hop on, which comes with the responsibility of keeping her or him as safe as possible, so he or she may enjoy this activity for years to come. Then calmly roll off heading back home while enjoying the beautiful sunset.
We totally agree with its makers’ claim, that this is the most comfortable big-bore ATV on the planet.

When rolling over pristine trails being gently rocked by the uneven beauty of untouched lands, the ride in the back actually sends you to another planet; a clean planet, free of noisy highways and huge cities, free of humanity’s disregard for the symbiotic and fragile nature of nature itself. All own ATVs here, and take care of the land, through an endless web of maintained trails instead of paved roads. The cool breeze, gently brushing my…Eh…What was I talking about? …Can you blame me? I’m not used to this sitting in the back thing! I must have dosed off here in the back. One thing for certain is that most people I had a chance to treat to a relaxing trek among the trees, commented on their feeling very far away from home, soon into the ride. Ok, now please get off and give me back the controls, I need to wake up and have some more fun!