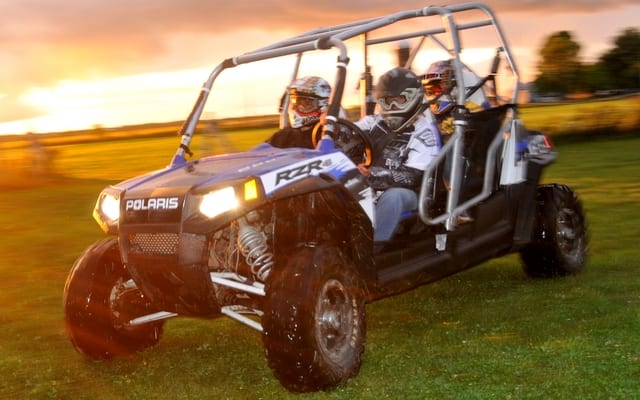 The  2010 Polaris Ranger RZR 4 Robby Gordon Edition is not only the industry’s first four-seat Sport side by side, but also a very studied and advanced vehicle, which can actually outperform its predecessor: the Ranger RZR-S, in some off road riding aspects. Designed in partnership with racing legend, Robby Gordon, it’s truly built for extreme, razor sharp performance, as Polaris seems to love stating anytime they have a chance to. It has a much longer wheelbase which will, of course change the general behavior quite a bit, but mostly on the positive side. Influenced by other expensive Sand Car or powerful Rail machines, this ride truly provides a fast yet safe platform which is perfectly suited and purposely built, for sharing your off road pleasures with loved ones and friends.

Introducing the  2010 Polaris Ranger RZR 4 Robby Gordon Edition, the world’s first 4-seat sport side by side, designed in partnership with racing legend Robby Gordon. Its enjoyment possibilities start standing out, as soon as it is exposed in plain view on a trailer. Anybody and everybody seems to be fascinated by its looks, whether you’re rolling down the highway and every car is filled with pointing fingers and huge smiles aimed in your direction, or when entering a town and people start commenting on it or asking questions, at every stop or traffic light. Stop for a break at the coffee shop and crowds gather around it in curiosity. The Ranger RZR-4 is very social in nature, interesting even to people who normally don’t bother with any other off road vehicles. Exclamations are plenty, even before the key is turned to bring it to life. If they would only know, how true it is to its high performance and fast looks. Just looking at the huge Fox racing suspension units, one can imagine it in flight pretty high and landing ever so smoothly.

A gaze at the wonderfully studded Maxxis Bighorn tires it wears, and one can imagine the showers of dirt,dust, mud or snow it creates. All of this high performance, in every aspect of the ride, translates into unmatched comfort when the vehicle is used as it should be; within the boundaries of what is, first of all, legal and secondly by respecting the many and very important recommendations and warnings from the manufacturer. If you buy a Ferrari, doesn’t mean you should blast it through traffic at 200 km/h on the shoulder.

ATVs were first designed very specifically for aiding farmers with their daily chores. That time has long past and we, the riders, turned them into a recreational thing. ATV use became more and more popular, as people were using them simply for entertainment in off road exploration, after that long hard day at work. Sharing the experience by inviting others to hop on the back, despite the fact that their ride wasn’t at all designed to carry and handle more than just its operator, was simply second nature. It remained that the activity of trail riding was much more of a social thing, and ATVs were just about the only type of vehicle satisfying our needs to explore uncharted territory, discover secret beauty hidden in the vastness of nature’s canvas. So, the users themselves, turned them into multi-passenger vehicles. With an individualist approach, the activity loses much of its worth. Describing a given discovery just didn’t quite cut it.

One wanted to share what it truly felt like, to sit comfortably on the edge of a secluded water hole and watch the sun drop in between branches, as it tints untouched pristine surroundings in a warm yellow colour. It is what is much more fun is to explore with others!  So, some manufacturers (for now only the North American ones) recently gave the people what they obviously wanted and needed: ATVs for two. Then came the Side X Side, and people started piling up three or four in those, using the rear box for people instead of cargo! We, certainly don’t approve, of such, and other unusual things some people decide to do with their vehicles, but the simple fact is that Polaris banked on this trend, and at the same time, must certainly be helping in making the off road world a safer place. Need only, the people buy the right machine for their specific type of usage and many incidents will be avoided. In almost every case where someone gets hurt on an ATV or in a UTV, negligence from the users is the main cause.

Polaris was wise enough to encourage such a social twist to the off road experience, and gave the good people a Side x Side that is perfectly safe to pack in up to 4 persons! Don’t hesitate to favor this choice over the RZR-S. I promise you won’t be losing anything on the performance side, and it is a mere one thousand and some extra dollars for this longer one, which can also be transformed into a two-seater with an enormous amount of space for camping, hunting and fishing gear. Removing the seats can be done in one smooth motion, with only one strong hand. The only disadvantages would be that it won’t fit directly in a pick-up truck, and turning it around in a trail takes patience and many gear changes between reverse and either Low or High range. You can’t get impatient with the transmission, or it will scream grinding gear noises at you. The buggy needs to be really totally stopped for the simple and straight pull back on the short lever to snap right back into high gear.

It fits snug on our snowmobile trailer, though. Anyway, we’ve had the experience that although you can pack a two-seater Side X Side in your truck, it gets to be quite a burden, as its suspension and tailgates tend to get damaged more quickly. We reinforced ours with a solid metal T bar on the top edge but got fed up of driving with the rear wheels deep in the fenders. So now we, always pack UTVs on the trailer.

All should remember to, at least, wear a helmet and eye protection, as well as snapping on her or his seatbelt and making sure it is tightly fit at the waist (they can get dirty and be tough to slide, which can leave them adjusted to the person who sat there before you. Keeping them clean and freeing them up regularly is a good idea). Then there is absolutaly no reason for anyone to be scared to hop in, which we found out was definitely a factor at times. Of course, it looks very fast and can be intimidating to some. It is a good idea to reassure people by explaining that all of its impressive race-ready features actually make it a safer choice over many other Side X Side vehicles. Even rollovers should be a pretty uneventful thing when everyone keeps limbs inside and is following all safety guidelines to the letter.

The ROPS certified cage is solid enough to take on many hard licks. This brings me to think of another very small change for a huge difference, in comparison with other RZR rides; the side protection bars stretches forward a bit more and this prevents them from slipping under the occupants’ arms and catching them in the ribs. Also, we found out the hard way, or at least my friend Clo did, that when a front seat is adjusted far to the rear for a tall person, the rear passengers fingers can get squeezed between their grab bar and the back of the seat when hitting a big enough bump. Keep the front seats adjusted a tad forward to avoid this very painful mishap. All four bucket seats are interchangeable and offer 4 inches of front-to-rear adjustability, making it easy to switch drivers.

Pushing into a power slide with this much longer  2010 Polaris Ranger RZR 4 Robby Gordon Edition, is only just a tad harder than with the other shorter ones but once into it, the slide felt much more predictable and easier to control. Tipping it over is close to impossible, when following the basic rules for the safe use of any Side x Side vehicle, that is: never steer under braking, don’t engage a turn with too much momentum going into it and be extra mindful of the ever changing surface underneath you. Remember now, we do all of it, so you don’t have to! From a standstill, on just about any hard packed surface (even asphalt if wet or dusty enough), I turned it around 180 degrees, by simply flooring it with the steering wheel completely turned to one side or another, despite a full load of giggling adults. Of course, I tried the donut test alone first, then with a passenger, to clearly notice that adding more weight had surprisingly very little effect on the handling. Try the same thing on any sort of loose ground and it might work, but it might also grab a little too much and get scary near the end of the maneuver. We are definitely not saying you should try this sort of stunt, but we think it is nice for you to know how truly stable this amazing machine can be.

This stretched version of the RZR-S model uses the same 760cc High Output (HO) Twin, which can be good for almost 100 km/h (61 mph) in top speed and provide surface destroying acceleration. The RZR 4 gets an extra 30 inches of wheelbase and gains a claimed 255 pounds (1255 lbs total). Overall dimensions are 24 inches longer and 4.5 inches taller, but it still retains the 60.5-inch width. Extending the wheelbase drops ground clearance to 11.5 inches (from 12.5). The Ranger RZR 4 is available at Polaris dealerships at a MSRP of $17,999 (CAN). A full line of PURE Polaris accessories, including roofs, cabs, bumpers, brush guards, windshields and Lock & Ride products are also available, including many of the existing Ranger RZR and RZR S accessories which fit the Ranger RZR 4.

“Polaris saw a market for a multi-passenger Sport vehicle at a significantly lower price than an expensive Sand Car or Rail,” says Eric Nault, Product Manager for Ranger RZR 4. “The Ranger RZR 4 fills that need for a Sport side-by-side experience for multiple passengers.” Boy oh boy! We couldn’t agree more, and I thought I would never love a Side X Side more than I did the RZR-S. I guess I was wrong, this one I don’t even want to return, ever. The thought of my Polaris friends calling to ask for it back, is depressing.