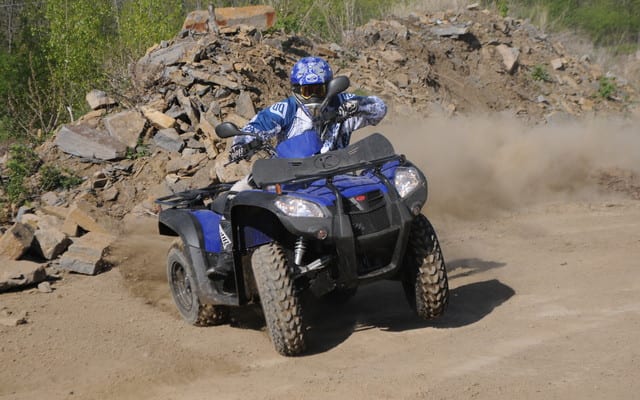 After knowing an almost immediate success with his first full sized ATV, the MXU 500, Taiwanese giant KYMCO, puts back some by marketing this very new MXU 500 IRS. The IRS stands for Independent Rear Suspension of course, which has become a must have for many hardcore trail riders with serious terrain conquering on their “to do list”. We just couldn’t help but be in total agreement with this ride’s readiness for on road use too. With everything from turn signals, to a horn, and even a steering column lock for when you park it downtown… in Paris!

On the go
The 2010 Kymco MXU 500 IRS is animated by a SOHC single cylinder liquid-cooled 498.5 cc endowed with a 4 valves cylinder head. For a carburetor fed engine, it purrs surprisingly smooth with almost no vibration when idling. This IRS model has an automatic choke instead of a good old pull choke, and a small primer lever, easily accessed once the seat is removed, must be pumped a few times for cold starts. Thanks to its 35+ horses and to a decent dose of power felt in the mid-range, it offers smooth departures but then pushes forward quickly to attain the 50 km/h mark. The 2010 Kymco MXU 500 IRS is KYMCO’s largest and most powerful ATV to date.

If the trail up ahead permits, it will keep climbing, with a slight but constant pull on the arms, to its top speed of around 88 km/h and give you the feeling you are riding something a bit bigger than a 500 up until that point. While its rumble gives the impression that one is in the presence of a lot more imposing motor, we would have wished for a bit more responsive reaction to a full press of the thumb from a standstill. Truth is, this sort of delivery is a much safer one, but some might miss having some rear spinning action available to turn it around in a hurry. Anyway, this is no quad for this sort of behavior and the shift lever is so nice to operate that it is almost as much fun to turn it around in a quick two-step maneuver.

Riding it
On flatter grounds, obviously the front and rear dual A-arm setup with the same 7.5 inches of travel meant that it felt tippier than its predecessor, the non-IRS MXU 500. Still, the anti-sway bar on the IRS did a good job at keeping a good balance between stability and comfort. The bubbly shape of the rear Pathfinder tires didn’t help in that sense and they would hook up quite a bit at the recommended 4.5 psi they were delivered with. It is important to note that the spring pre-load adjustment was at the lowest of five available settings all around, so it would have been easy to improve stability by cranking those up at least a few notches, but we didn’t feel the need to do so. We never felt at all tense, when the interior wheels would start climbing up, they would always do so in a predictable and controllable fashion. Trust me, our friend Fitto managed to beat it into some impressive power sliding action anyway.

Stopping power
The 2010 Kymco MXU 500 IRS offers a pretty intricate all-around hydraulic disc brake system with two discs up front at the wheels and one perpendicular disc directly on the rear shaft. Three independent mechanisms can be used for braking: the two discs in the front are squeezed by action of the right lever like usual, and the rear disc can be independently activated with a squeeze of the left hand lever. Both hand controls have a park brake mechanism. The foot pedal (placed way too high for my taste) acts on all four wheels, with a higher percentage of braking action at the rear. I must say that I think it would have been more logical to have the left side hand lever do this task instead. As such, only one park brake mechanism would have sufficed to lock all four wheels. Still, this unique system does allow a very fine control on the braking when in 2WD mode; exactly according to the needs of every instant, but serious quad riders usually like to have this precise independent control of the rear brakes at the foot pedal. To cancel the foot pedal’s action on the front brakes would be a fairly simple modification though, and one of the first things I would do if the machine was mine to keep. In any case, it is better not to use the foot pedal at all when going down a slope. Using both hands (or only one if in 4WD) to brake will give you much better control and feel.

Pushing it
The large 12-inch Kenda Pathfinder tires give this new KYMCO a substantial 10.2-inch average ground clearance, which came in handy in our playful time on our newly-found huge rock piles at Saisons Express in Léry, Québec. In that sort of situation, the roundness of the Kenda Pathfinder tires was appreciated as they would minimize lift of a given corner of the machine, when passing over big rounded or angled rocks. Of course, the down side to this is that the underside is then more at risk of grinding on things, but this KYMCO’s plastic skid plates did offer some protection. One long scratch along its center was detected after our excessive use, in conditions nobody should ever have to conquer. The 2010 Kymco MXU 500 IRS turned out to be a surprisingly capable crawler.

The front end was pleasantly stable when the going got a little rougher, like when hitting series of small bumps at higher speeds, with just a hint of natural push on the bar as soon as you steer to one side or the other. This trait almost made the steering feel like it became assisted, whenever the first little bit of effort was made by the rider and it stayed as such even in 4WD, but totally disappeared when 4WD with the front diff-lock activated was selected. That, along with the very rounded shape of the tires and this surprisingly very good independent rear suspension system, made this quad excellent for carving through tight wood trails, while keeping a good and fun pace. The rear end didn’t hop around too much, despite the fact that there was an obvious difference in rebound action between the front suspension, which had very little, and the rear with a normal speed back to a neutral position.

It was also quite efficient in the mud and we really liked how the ride’s traction mode could quickly and easily be switched. A simple press of the very nicely placed button activates all wheel traction and flipping the rotating ring at its base switches on the front differential lock electrically. The nicest thing about that ring switch is that flipping that one control alone, will automatically select both the 4WD mode as well as the diff-lock, even if the button in its center is left in the 2WD position, so only one very simple move of the thumb can instantly provide optimal traction on the go.

We agreed, after our relatively short time spent with this road and trail ready 2010 Kymco MXU 500 IRS, that it was a great deal for anyone’s money. KYMCO is obviously learning fast in this highly competitive motorsport segment and despite still having a few things that could be improved, the quality is truly there. We actually found it to be a very logical choice of ride for any beginning ATV rider on a tight budget or as a second quad for friends and family. Fact is, at this low MSRP of $7,995.00 Canadian dollars, it is tough to find such a complete and appealing package for so little, of course, if you intend on buying new. Boy, does this thing have a lot of cool little practical additions: a square tow hitch, handy storage compartments with one underneath at the rear, on the opposite side of the exhaust, with the same cylindrical shape; and another opened on the top of the right side fender.

You get a bracket ready to host a winch, a recoil starter, a clear to read, in the day or at night, digital instrumentation with many different display options, an easy to operate large fuel valve knob just to the side to select the reserve on the go, speed limiter, standard front and rear racks, and there’s more but I can’t write it all, it might take up the entire magazine! By the way the wind deflector seen on the photos is an added accessory. I also loved how everything was very easily accessible for mechanical repairs or maintenance. It is also good to know that this pleasant ride, as all KYMCO ATVs and UTVs, is backed by a limited 1-year warranty and that one can also get up to a 4 Year KYMCO Extended Protection Plan, available from any authorized KYMCO dealer.

KYMCO obviously put to profit its collaboration with Arctic-Cat (initiated with the “MXU 400”) and one rediscovers in the conception of the suspensions and rear train, a “US” inspiration. Suddenly, huge technological evolution for the model: the rear suspension which was ok to roll over twigs on the older MXU, became a truly well conceived suspension system for any sort of trail riding! This evolution really gives new life to the MXU 500, and transforms the machine into a lot more attractive and competitive one. Honorably suspended and snuggly comfortable with its huge horse saddle shaped seat, the 500 IRS is obviously a very attractive choice, at a very appealing price. We soon attacked every challenge with confidence and seriously noticed a huge improvement with this new locking of the differential and better ground clearance.

To a point where water found its way up and into the CVT’s breather, which climbs up behind the seat and stopped our fun testing, dead in the water, with serious belt slippage going on. A short break was in order and after 15 minutes, we were off again. As you can see in the photos, we were kind of looking for trouble and I wouldn’t really blame the machine too much. Positioning that breather somewhere along with the one for the air filter, up high between the fuel tank and seat, would have been clearly more efficient, as the air box stayed completely dry. Checking it took only seconds with snap of all 6 clips holding the cover down with a perfect seal, right under the seat.

With a very complete list of great equipment, a contained price and a basis for proven reliability, the 2010 Kymco MXU 500 IRS is truly in the race, with ambitions of becoming a strong contender for bestseller in the 500cc category. Thumbs up for KYMCO! You guys and girls really did a great job with this one.