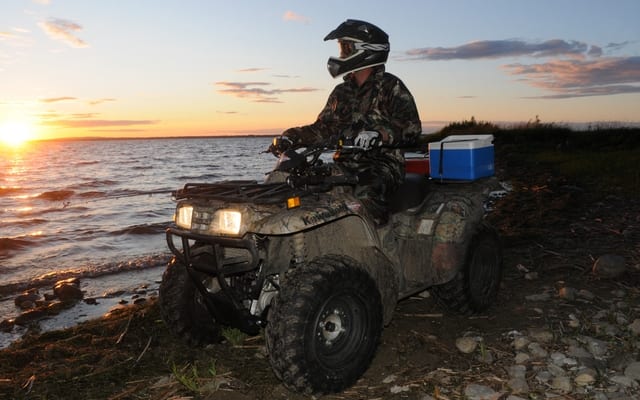 Ok fine, this is no beauty, it doesn’t pop wheelies, even with a ridiculous looking pull on the bars and it doesn’t come with any fancy looking wheels or any high end electronic features. You can force it into a decent power slide, but kind of feel ridiculous when doing so. This baby’s calling isn’t just for flashy outings at the beach; it’s built for true and hardcore off-road supremacy, in the worst conditions imaginable.

I have to admit that my expectations were pretty low, when first climbing aboard this small tank. Oddly enough, I managed to find some recreational qualities to this odd looking quad, with nothing sporty whatsoever. The engine is a light, simple, air/oil cooled, 362cc single-cylinder unit with overhead cam valve train. It’s fed by a CVK-34 carburetor that delivers smooth throttle response and efficient fuel consumption. The lack of counterbalancing in this single cylinder mill gives it a funny and quite pronounced front to back shake that is enough to make those extremely efficient large rear mud flaps flop up and down.

The high mode on the dual range CVT with reverse seemed like the equivalent of a low gear on most big bore quads. In low it will crawl up a wall! Almost instinctively, I aimed for the worst looking huge rock pile available. All of a sudden, this ride became a fun one to ride. The many protective features on this tiny tractor truly made it feel like a tank that could roll right through a brick wall. I would actually be curious to see this quad’s condition after doing just that for real. I’m betting the rider would be pretty banged up, but the KVF would simply roll away unscathed. Back on the flats, a push up in the high rpm count will climb it efficiently quick to its top of 60 and some km/h. Trick is to not get worried with sustained high revs, that motor is known to possess a seriously solid base and won’t mind that at all.

An electronic switch on the right side of the handlebar lets the rider easily change between 2WD or 4WD, while further traction can be precisely controlled at the squeeze of a manual lever easily reached and operated with just one finger of your left hand. The more challenging the trail got, the more fun the KVF 360 became. It feels a little heavy to steer, but that is expected with such extra-robust Macpherson struts, but on a positive side, they make the ride almost immune to bump steer. I love how the whole base of the system is molded to wrap around the cardan boots to protect them, and how this sort of built-in shield ties in well with the added guards on the lower A-arms, making the entire front impervious to anything in its path.

That brings me to think about this ride’s best feature; invincibility. The air breather tube for the CVT is nicely done, as we tried to flood it without success. The internal wet brake is completely sealed and impervious to dust, sand or mud. The Green team seemed to have gone down a list of possible mishaps and failures in heavy-duty trail rides, and checked every element off the list as they built the machine. A belt failure detection system lets the operator know, with a red led light on the instrumentation panel, if the double cog KAPS drive belt is excessively worn or frayed. Under such conditions, the drive belt trips a switch mounted atop the CVT cover that limits engine speed, prevents the machine from being shifted into 4WD and signals the operator to head back home nice and slow. The Uni-trak rear suspension features a large shock for stable damping and five-position preload adjustment. It comes with a dual-rate spring and delivers more than seven inches of wheel travel.

The swing arm is the most interesting part of the whole machine, encasing every moving part normally needing to do its job at the rear of the bike. It holds the drive system and a multi-disc oil bathed rear brake system won’t need servicing for long periods of time. On top of that, literally, both brake control adjustments are equipped with nice and wide winged nuts for super quick and easy operation, without any tools or sore fingertips. The rear brake is lockable at the left handlebar control lever.

The sturdy steel racks provide a large surface area for carrying your big catch. Racks are rated 40kg front and 70kg rear. The nice thing about the rear one, is that the seat is set flush to it and doesn’t hinder its practicality, when carrying large and flat cargo. I would feel comfortable in exceeding those numbers and pack them more heavily. The engine won’t even budge and you will hardly feel any difference at your thumb.

This is an incredibly tough little off-roader and I just don’t see how anyone could get stuck unable to get back home with this one. I would actually strongly recommend it, to anyone with tasks that leave no choice, but to trek out far away all alone. It weighs a hefty 263kg in dry weight, which is the price to pay for its invincibility, yet stays quite nimble and predictable enough to be a very safe quad to use by anyone. Despite having a very basic look, this ride comes with an interesting set of extra logical features that justify its reasonable suggested price of $8,199. The 2010 Kawasaki KVF360 is one of the most practical and tough machines on today’s market. Always ready to haul heavy loads, or getting dirty as you explore very challenging terrain, it will never let you down.