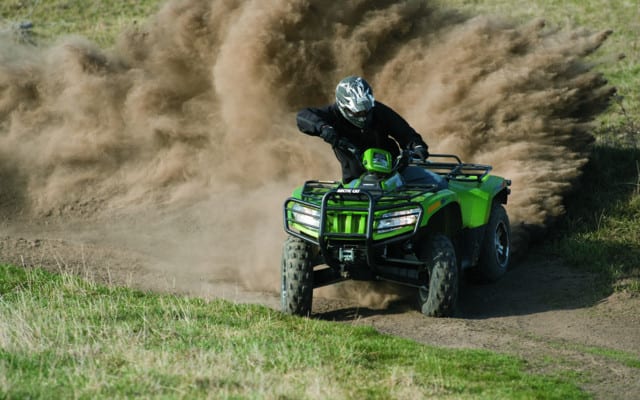 They’ve been known for their extravagance in designing play in the snow rides so powerful they can intimidate even experienced riders. For those usually brave souls, the Cat provides the means to better themselves at their favorite thing to do: riding ever harder and faster. It is no surprise to see the Cat now also creating a stir in the ATV world with beasts like the Thundercat and MudPro.

Always at the forefront of pushing their technological wonders to extremes, most of the time influenced by their clients’ high expectations, it has recently become a greater challenge for Arctic Cat to better themselves from year to year. Oddly enough, they always seem to please and surpass their clients’ demands in performance. This time around for 2010, they mostly used some of their best and already proven elements and churned them around a bit to bring new winning combinations to an already complete menu of off-road treats.

Arctic Cat, a world leader in Snowmobile, ATV and UTV products, utilizes three facilities located throughout the United States that offer a combined 800,000 square feet of work space. That’s plenty, yet every square foot is put to good use by approximately 1,500 full time employees working at the Thief River Falls facility, 65 doing their magic at their engine production facility in St. Cloud, Minn. and approximately 110 employees operating their distribution center in Bucyrus, Ohio. In May, 2008 they expanded into their corporate headquarters located in Plymouth, Minn. That makes for a lot of passionate people all focused on one very important common goal; which is to satisfy the growing needs and demands of an ever growing number of avid motorsports enthusiasts. Like in a symphonic orchestra, every player is crucial in achieving greatness of the end product. The fruit of team Cat’s efforts is certainly symphonic to the senses, of workers, recreational riders and extreme riders alike. If anybody can build tough and powerful play and work machines, Arctic Cat sure can. Their experience and dedication is unquestionable.

They’ve done it again! Resulting in a monstrous demonstration of might, they’ve combined the MudPro’s undeniable strengths as a high standing, ground munching and water diving beast with the Thundercat’s mighty and powerful 1000cc engine. With its white surfaces aching to get dirty, the new MudPro 1000 looks like nothing else out there. Beautifully huge and exaggeratingly efficient on normally impossible to conquer grounds, it can be driven confidently into a lake of mud or water, parked there for a relaxing throw of a lure, to then roll out of it as if nothing could be more normal.

The MudPro 700 created quite a stir last year and instantly became a best seller for Arctic Cat. The snorkel air intake and huge Maxxis Zilla tires certainly gave it a good amount of eye catching capability just sitting quietly on a showroom floor. Imagine how they turned heads when they were being seen here, there and everywhere doing their thing in the most intimidating terrain imaginable. Success of this newly created class of ATV, prompted Cat to offer it in a more affordable package. In comes the MudPro 650, built just as Tough, but without some of the expensive bling included with the larger models. This one doesn’t have fancy wheels or shiny automotive style metallic green paint job, just regular green injected molded body panels with rugged black steel rims. You do, of course, get the same distinctive snorkel air intake that feeds clean air to a 641cc engine using good old carburetor technology, even if in water up to the handlebar and the same conquering ability with Maxxis “Zilla” tires and 14 inches of ground clearance.

The Metallic Green paint, which came about with the launch of the MudPro 700, was a huge success with dealers and consumers. So for 2010, that same Metallic Green will be available on the new 700H1 EFI and Thundercat 1000H2 EFI LE models.

Another popular trend emerging is the use of camouflage without necessarily having a need for it. Many people just love the look, but avid hunters take their camo much more seriously. That’s why the people at Arctic Cat have the all-new Advantage Timber Camo pattern available for the 700H1 EFI and 550H1 EFI.  This pattern will make these fine off-road machines disappear in any wooded settings that can be found from coast to coast. Perfect for deer or turkey hunters, as well as duck hunters working flooded timber. Also new for these models, is the body styling on the 550 and a new electronic 2WD/4WD/Differential lock on both.

The Super duty diesel makes a comeback in 2010, with a 700 twin cylinder, SOHC diesel engine that provides 50% greater fuel mileage over conventional gasoline engines with unmatched amounts of low-end torque. It also has a few improvements such as the new right hand side electronic Diff-lock control and a 2,500 lb. winch already installed.

In the 2-up category, another fairly new ATV class that continues to grow in popularity despite the recently tough economic situation, the ATV industry, Arctic Cat included, has done a good job of attracting more people to this enjoyable activity through diversification of models aimed at different groups of people. With this in mind, Arctic Cat improved its luxurious TRV 1000 and 700 Cruisers with an easier to open rear storage box and better Differential Lock switch. These have a winch, aluminum wheels, windshield with handlebar mounted mirrors and heated driver and passenger handgrips already added on. Painted in Metallic Black, the TRV 700 joins the 550 also with a redesigned electronic Differential Lock switch on the right hand side. Also available is a new 1000H2 EFI TRV SE model with Metallic Black painted bodywork and 12″ aluminum rims.

On the UTV side of things, the new Prowler 550 XT has been added to the line. The XT package gives you the addition of aluminum wheels, bumper and 600lb cargo box and it’s available in red, green and lime green.

For more information on the above mentioned models, please visit the Arctic Cat Website