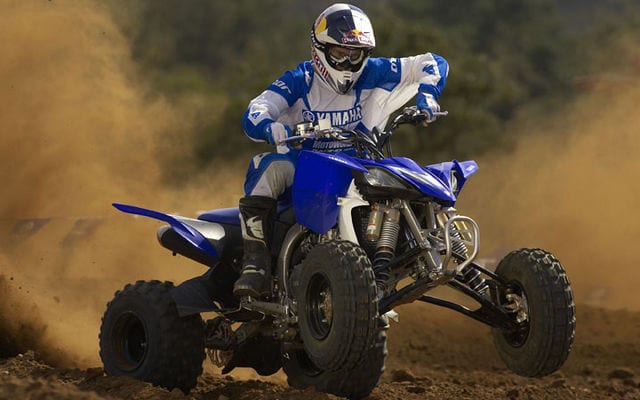 Yamaha riders can rejoice; the long wait is over. For years Yamaha riders have hung on every rumor from supposed test riders, and from information gleaned from internet web sites, but until today there was only the hope and rumor of a new YFZ performance ATV equipped with fuel injection and an all new aluminum chassis. What finally arrived was much more.

Yamaha grabbed the holeshot on every other major ATV manufacturer when they first released the YFZ 450 several years ago, and since then it has won countless races and numerous championships at every level, and it still does today. With its motocross inspired 5 valve head mated to a high performance motor, excellent suspension, and racy styling, the YFZ jumped out to a huge early lead as the first true performance ATV released by a major OEM since the demise of the legendary 250R.

The problem is that since its release there have been six new competitors in the 450 class, all with their own unique features, and it was time for the YFZ to shift it up another gear. In the past couple of years several manufacturers have released models aimed squarely at the motocross track, and that left the YFZ 450 a little short changed. To go head to head with models from Suzuki, KTM, and Can-Am, a Yamaha rider often needed to purchase aftermarket A-arms and shocks, and only then could he hope to handle as well as models that held a distinct advantage from the factory. The all new 2009 Yamaha YFZ 450R  is designed to answer that challenge and it comes from the factory at an AMA legal 50 inches wide, with an all new chassis holding it all together.

CHASSIS REDESIGN
Similar to it’s bigger brother the Raptor 700, the 2009 Yamaha YFZ 450R  utilizes massive cast aluminum main spars from the foot pegs on up. Unlike the 700R how-ever, the new 450R cast aluminum pieces -continue on under the fuel tank, through the front shock mounts, and down to the lower frame rails where the lower A-Arms mounts are found. In fact, the entire front end of the 2009 Yamaha YFZ 450R  is one mass-ive casting that is bolted to the rear portion. Both lower frame rails and lower cross members are constructed from high strength tubular steel and are bolted on to the main chassis just ahead of the widest foot pegs we’ve ever seen. At the rear Yamaha again chose to go with their cast aluminum sub-frame, and a new cast swingarm that is 15mm longer than the previous models. Front end rake has been increased to 11 degrees for better drive through the rough stuff, and the A-Arm mounts have been moved 16mm closer together for less geometry change through the shock stroke. Since the A-Arms are much longer than on previous models, a new set of shocks was required as well, and the new front shocks are now massive units with piggyback reservoirs and both high and low speed compression, and rebound adjustability.

Each shock also gets the Kashima anti-friction coating for smoother operation, and they now are 462mm long with a 128mm stroke. What that all adds up to is a front suspension with 9.8 inches of travel, and a rear suspension offering 11 inches of wheel travel. Although the new frame is said to be 15% lighter than the previous YFZ 450 chassis, curiously the entire unit actually weighs significantly more – perhaps 30 pounds more by our quick estimate – but some of that must be accounted for by the longer A-Arms, axle, heavier shocks, and other bigger components.

ALL NEW ENGINE
The motor of the 2009 Yamaha YFZ 450R  is an all new 449cc power plant, and from the castings on up nearly everything is changed. The castings themselves have been strengthened for better reliability, the crank shaft has been beefed up, crank bearings have increased in both inside diameter (by 2mm) and outside diameter (by 3mm), and in thickness, and the connecting rod is 6.5mm longer and 2mm thicker as well. At the top of the engine an all new head design feeds fuel into the engine from the 42mm Mikuni fuel injection system, and the head is straight off its 450cc motocross bike cousin.

That means there is no longer a reason to switch to the motorcycle cam since it will come standard on the 2009 Yamaha YFZ 450R. To keep engine vibration to a minimum, the counter-balancer has been increased in size, and the engineering staff we talked to claim the new engine is 100% balanced as opposed to 70% balanced in previous years. Inside the gearbox each gear has been increased in overall size and thickness for better reliability as well. Most current YFZ owners will notice that the oil reservoir is missing just ahead of the engine, but instead of running an external oil tank like on previous model years, the YFZ 450R features an internal reservoir at the front of the engine. The advantage is fewer external lines and slightly less volume of oil.

RIDER COMFORT
One of the major factors in the design of the new 2009 Yamaha YFZ 450R is increased rider comfort, the look was also changed with input from the Yamaha racing team, and the new bodywork allows a rider to shift his body as needed with little to get in the way. Even the key was moved to a location just ahead of the steering column, and next to the key is a small indicator light section that warns riders of any engine trouble. At each side of the fuel tank are two large black panels that continue on to the rear fenders, and they can be removed rather easily for maintenance or replacement. One thing most riders will notice is the large “T-bone” style seat, not unlike the one Suzuki has been using for a couple decades on their ATVs, but regardless of where it came from, we like it. Just under the seat the airbox is found, and as usual it’s easily accessible to clean the air filter. Riders will also appreciate the fact that the new YFZ 450R comes standard with “Pro-Taper” fat bars, and the bar clamps are adjustable front to back for whatever feel the rider prefers.

WAITING FOR A RIDE
Now that the new 2009 Yamaha YFZ 450R is a reality, we can’t wait to take it for a ride. Only time will tell if the new engine and chassis package will provide the outstanding performance so many riders are expecting, and since the new racer is to be available in November of 2008, we won’t have to wait much longer. You can bet as soon as we’re able to get a ride on one, we’ll have a full report.