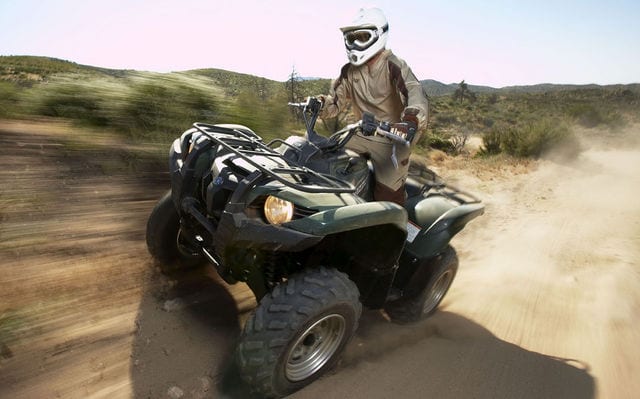 The excitement factor wasn’t all that high when I was invited to the 2009 Yamaha Grizzly 550 FI model launch. I have to admit, that all these new big bores, high performance side by sides and hot racers recently flooding the market, have been renewing my passion for ATVs in general and given me a lot of ATV rider satisfaction.  Boy was I in for a surprise!  First of all, the choice of spot to have us try this new tamed version of a Grizzly was an absolutely breathtaking one! Amazing Lake Arrowhead in sunny California it was. Just getting there, the view, from the car window, while climbing 5,000 feet in elevation to Lake Arrowhead, was amazing enough! Not to mention my pretty Yamaha driver on the other side, who stole quite a bit of my attention! Comfortable, easy to operate and handling superbly, the new 2009 Yamaha Grizzly 550 FI has a 558 cc four-stroke engine, with four valves, which can support surprising-ly heavy loads. It is equipped with the YAMAHA electronic injection system, which decreases emissions and gasoline consumption, while adjusting itself to different temperatures and altitudes to provide smooth and efficient operation in any riding conditions. The 2009 Yamaha Grizzly 550 FI was conceived to answer a very wide spectrum of people, with different needs.

The professionals will appreciate it for an intensive daily use, as well as the amateurs who will choose it for trail riding leisures and will appreciate it for its accessibility, its handling and its comfort. This is definitely one of the most versatile machines I have ever tried. Only a bit of a lack in throttle response was detected, which should be less of a problem at a lower altitude. We were riding it around at elevations between 5,000 and 6,000 feet which surely robbed a small percentage of power. It seems the key focus, when designing this quad was to avoid rider fatigue. A huge part of this quad’s ease to drive and comfort is, of course, due to its new electric power-assisted steering, first introduced on their 700, which adapts to the speed of the vehicle to guarantee perfect handling and control through almost any type of terrain. If you’ve never experienced such a steering system, it does take bit of getting used to. When you hit a rock or tree stump at slow speed only on one side, it can jerk the handlebars a bit. But once mindful of this, it’s no big problem. Firming up your hold on the bars, when going over the obstacle, will prevent any surprises. All in all, the system makes riding an ATV of such size child’s play (on which I should point out that it might sadly encourage small, younger riders to operate such sized machines, something no adult should let happen).

As the quad rides faster, less assistance is provided to keep just the right amount of feedback to your hands. They’ve tuned this one just right it seems, and all types of users, whether at work or play, will greatly profit from the lack of strain to arms and hands. We pushed it hard all day and had no fatigue whatsoever. It seemed like we could have kept going forever. Adding to the ease of operation, were a few other key features coming into play by making the whole quad experience a more comfortable one. The seat is made of Yamaha’s exclusive gel and foam combination, which really does an amazing job. During my first ride on the blue beast, I was mostly standing, trying to keep up to my young and fast guide. This was no place for antics, because running off the trail would have killed us for sure, in view of the cliffs’ presence. Despite this threat looming over us, I quickly got comfortable enough to push this growling beast as I would with a true sport quad. I really felt perfectly balanced with the whole package. The foot peg position was perfect and efficient, easy application of the brakes was also noticed. The suspension, of course, plays a huge role in the feel of a quad, as with the rest; it seemed perfectly tuned to make every obstacle almost disappear from under you.

The balance from front to back, as well as side to side is perfect. I made sure I tried the same rough section standing up and then again sitting down, to come to realize I was going almost just as fast sitting down. At some point, we went through some really difficult rock climbing and the 2009 Yamaha Grizzly 550 FI chewed at it like it had just come out of hibernation. After checking with me and another reporter, pointing at the climb ahead and asking how we felt about taking it on with a bit of body language, signalling his thumb up, but yet waiting on confirmation with a quick helmet shake side to side and up and down. By now, my Grizzly had really impressed me and I felt dangerously invincible. This, oddly enough, had me doubting on how good all this comfort was, and I now want to warn inexperienced riders to take it very easy with the 2009 Yamaha Grizzly 550 FI. I just don’t see this quad as ideal for someone who learns how to ride, as the machine seems too forgiving, but it is perfect for an occasional rider. There is less chance of incident with such a quad when just going about at low to moderate speed, but if one pushes it too hard: reaction time will be cut down, from the lack of feedback to the rider. So I pointed at my guide, and gave him my index to send him up first.

Of course, one should never venture through totally unknown high skill demanding obstacles without studying its conditions first. What better way to investigate, then to look at someone who’s already had a chance to conquer it. This is certainly where I had the most fun and appreciation for my furry blue friend under me. It was almost doing all the work! The power steering is at its most usefulness here, where one would usually have to really fight the handlebars hard, rubbing sticky tires to the sides of rocks. Still, parts of this climb demanded that I switch both my feet on the same side to keep it from toppling down to certain doom. I don’t think I would have ventured there with any machine. Other features also made this ride much more user friendly than other quads in its class. The engine braking worked superbly well, providing smooth deceleration without ever shutting off or back on too obviously. This made the whole process of going downhill and getting back on the gas for a climb, very smooth and seamless. Delivery of power is very smooth and a jerk on the throttle won’t create any surprises. I would have liked a tad more control at the thumb on the rear’s behaviour in 2WD. I was many times just gunning it and waiting on a fraction of a second late reaction. This one is truly perfect for the masses.