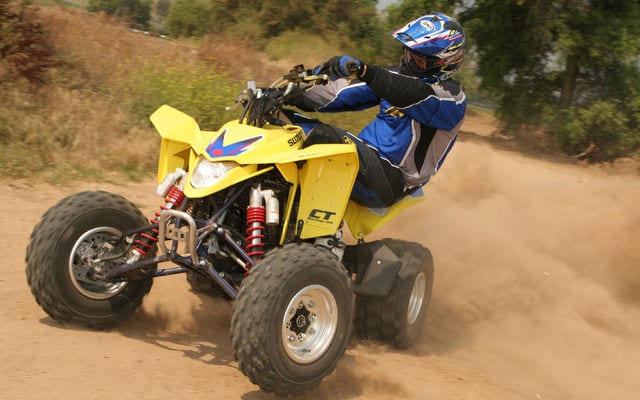 The 2009 Suzuki LTZ 400 sport ATV has always been one of our favorites. It’s easy to ride, comfortable, it has good power, and can be taken to the trail or track all day with no problem. When originally released to an eager sport quad crowd in 2002 (as a 2003 model), it offered handling, and performance that made it an instant hit. The LTZ 400 was exactly what a rapidly expanding sport quad market had been asking for, and soon there was a yellow wave of new Suzukis taking every riding area by storm. That was over 5 years ago, and since then the LTZ has seen few updates, and it was starting to look dated.  When Suzuki released the specs and a few shots of a reworked ‘Z400 for 2009, the changes were welcomed by the press, but were thought to be mostly cosmetic. First impressions can sometimes be deceiving, and we needed to ride it for ourselves to find just what the 2009 Suzuki LTZ 400 was capable of. As quickly as we could grab our Canon, boots, and helmet, we were off to California for a day of testing.

RIDE TIME
The first thing we noticed is that the riding position is much different than any of the previous years of the Z.  In fact, it’s clear the lessons Suzuki learned with their championship winning LTR 450 race quad have been applied to the new 2009 Suzuki LTZ 400 in many areas. The rider now sits in a more “charging” position, with a bar that is 5mm lower and 10mm forward, helping the rider maintain better leverages. The pegs have also been lowered, slightly moved back, and widened to 46mm, which is exactly the same as the LTR 450. The result is extra room, but better cornering. The seat was changed slightly to match the T-bone LTR seat style. The foam is still soft enough for all day trail rides, yet firm enough to move around on. Finally, the front brake lever was changed to an adjustable lever, just like on the LTR 450. When switching between the 2008 LTZ 400 to the 2009 model, the changes are easy to feel, and are a definite improvement in every area. It was time to see what the new engine could give us! A flip of the key kicked the new electronic fuel injection system on, and a stab at the starter quickly brought the 2009 Suzuki LTZ 400 engine to life. The EFI system compensates for temperature, altitude, barometric pressure, and current engine temperature and conditions. As in previous years, the LTZ engine is a liquid cooled, 398cc 4-stroke, single-cylinder, dual overhead cam engine with a counter-balancer. The large capacity radiator includes an “on-demand” thermostatically controlled fan for consistent operating temperature. Down below is a dry-sump lubrication system, with an oil reservoir mounted just ahead of the engine, and a 5 speed gearbox (with reverse) to get everything rolling. We really like the sound from the new exhaust system, with a throaty rumble that sounds much like the LTR 450.

Although the external portion of the exhaust is for the most part unchanged, internally it was reworked for better low to mid range power, as were several -other engine components. On the opposite side of the engine, the intake tract was straightened and narrowed for higher airflow velocity, and the cam was reshaped as well, also for more low to mid range power. The LTZ 400 had always been a fun quad to ride, with a strong, yet not overwhelming power band, but the 2009 Suzuki LTZ 400 feels far better. Right off the bottom it has a nice solid hit and it continues to pull well into the mid range. It runs strong, crisp, and clean from idle all the way to full throttle, and instead of a wheel spinning frenzy, the tires tend to hook up and drive you forward, thanks to the throttle/traction/engine -control system pioneered on the LTR 450 a year ago. We did make one odd discovery however. When we drag raced the 2008 LTZ 400 against the 2009 model, the two were virtually identical all the way to top end, with the 2008 often getting a better launch and pulling ahead, although both reached nearly identical top speeds. Regardless of rider, the 2008 would repeat this result, and we believe the engine management system on the 2009 LTZ actually senses any wheel slip, slightly limits available fuel, and lets the tires hook up for better traction, while the 2008 model pours in the fuel from the second the throttle is cracked open.

Even though the 2009 feels stronger, the 2008 is probably ever so slightly faster at some parts of the power band, depending on available traction. Either way, we’re not about to give EFI back, and we’ll take the 2009 Suzuki LTZ 400 any day! Great sport quads have plenty of controllable power, but even more important is handling and suspension. We have never been disappointed in the handling of the LTZ 400, and on past project quads, we have made it even better by adding longer A-arms, axles, and aftermarket shocks. But for 2009, you get geometry changes right from the factory. Up front you will find a set of dual A-arms with fully adjustable, piggyback reservoir-style shocks that provide 8.5 inches of wheel travel, just as in past years. However, Suzuki changed the caster, camber, wheelbase, and width on the new 2009 Suzuki LTZ 400, adding an inch in overall front end width, and by cutting a different taper on the rear axle, stiffened that as well. Front shocks and springs were changed for a softer initial feel that becomes firmer throughout the suspension stroke, and in our day of testing we believe these to be adequate, but not outstanding. At the rear is a linkage-type suspension also fully adjustable, piggyback reservoir-style shock offering 9.1 inches of wheel travel and 10.4 inches of ground clearance.

Both the rear shock and spring were reworked as well, but our first lap over the hard as a brick, rutted testing area in southern California convinced us we had major adjustments to make at the rear end. In fact, it was hard to get the 2009 Suzuki LTZ 400 to hook up, as each square edged bump was transferred throughout the machine. We did back off spring pressure, and ALL compression with the adjustment screw, and then it worked much better, but still only moderately well, and that was for our two 6’ and 6’-2” test riders, both of which are 190lbs. Once our shock changes were made however, the LTZ was entirely different. Suzuki put a lot of time into improving the handling of the 2009 Suzuki LTZ 400 by making changes to the chassis. Tubing thickness was increased in several structural members to stiffen the chassis and increase strength, the rear master cylinder was relocated, and the subframe was redesigned as well.

Even the rear brake pivot was redesigned for better feel, and the result of all the changes is a much better machine. Handling is precise, predictable, and easy to control. Oil changes and air filter cleaning is easily done on the LTZ 400. Unfortunately, chain adjustment is still a pain, but we can live with it. We did ask the Suzuki representatives why it was not changed, and it simply comes down to tooling cost. In our experience with previous model years, the LTZ has proven extremely reliable, and we fully expect the 2009 LTZ to be the same.

The Total Package
The 2009 Suzuki LTZ 400 is easy to ride, the EFI gives the motor a nice, peppy power band, and for most riders it will be excellent. It’s a huge change over previous model year LTZs, and we believe it has the ability to go head to head with some competing 450 models and could beat them in many areas. The new 2009 Suzuki LTZ 400 is the perfect complement to the racy LTR 450, and for play riding all day at the dunes or the trails, or for an occasional race, you really can’t get any better.