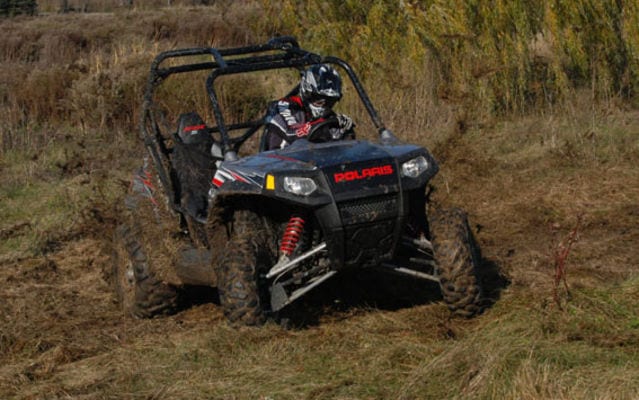 Creating a safe and efficient frame and suspension combination was crucial in harnessing the full power of this High Output 760cc twin cylinder liquid-cooled engine, which Polaris managed to tune out some extra power from. Lucky for many who can afford such nice toys, Polaris engineers cooked up an amazingly fun ride in the 2009 Polaris RZR-S. A much more logically equipped ride than any other stock side-by-side, which seemed obvious to me when merely observing both different suspension set-ups, on about the same ride, a stock RZR, and this propped up version, parked next to each other. The mere fact of having the wheel centers beside the occupants towards the outside, instead of right under them jumped to my attention and had me wondering why this was yet to be a rule of thumb in side-by-side conception and fabrication, as should be doors.

The lack of side protection is just about the only thing I thought seriously needed some improvement, but that’s true for almost all ROVs. While everyone should be warned that any such vehicle can become exponentially more dangerous as it climbs higher than 50km/h, there’s nothing wrong with enjoying true sport performance and ample power for quick and fun acceleration out of turns and a good enough suspension that permits you to just keep that moderate and logical speed over bumps that would have any other almost stop completely to safely roll over it. It is capable of reaching a top speed of 101.4 km/h (63 mph), but nobody should ever have to go that fast to enjoy himself. The ride is just so amazingly smooth with those fully adjustable Premium Fox Podium X shocks and efficient in any type of weather or terrain, that you’ll be able to hold your foot down and enjoy a ride that lets you do so safely, the extra stability resulting from the 5” longer A-arms completely changes the vehicles handling for the better of course and didn’t ever seem too wide for any place we go riding on quads.

Not to mention that it still fits nice and snug in my friend Martin’s pick-up. I wouldn’t normally go riding through wood trails on an ROV, but I just had to get a feel of how this little marvel would behave with its 60 inches of width. It was late one evening and the urge to have our fun with the 2009 Polaris RZR-S was just too unbearable as we couldn’t stop looking at it and comment on its beauty. My friend then tells me: “How can we still be just standing here talking about it Alain? Shouldn’t we be out there having fun with it on this perfect and not so cold winter night?”

It’s like having a roller coaster ride at the mercy of your commands.
From the very first moment I laid eyes on this sporty buggy, a huge smile stamped itself on my face and wouldn’t drop until this cool little thing was totally out of my sight and thoughts. I never thought I would be saying this, but I actually liked riding this amazing Polaris toy, more than any other ATV. I just can’t explain this great feeling, that joyful feeling, it brings me just by looking at it. I hadn’t felt the same since I had first laid eyes on the ATC 250R, the very first sport ATV, way back then. I guess it’s understandable, since this is the very first true Sport ROV,  popular mostly in the dune graced southern states of our friendly neighbours. The RZR has been enjoying great success and many racers already pimping out utility side-by-side Rhinos and Rangers will be tempted to buy these, which are already equipped with huge A-arms and fine quality shocks that translate into unequalled performance from out of a stock unit. They will surely be picking them up at Polaris dealers as easily as picking up a quart of oil off the store shelf. RZR’s have been popping out here in Canada also, and this despite the fact that they are yet to be accepted in federation controlled trails in Québec.

I’m seeing them frequently at racing events or on frozen lakes out here near Montreal and even crossed a few rebel users in my local trails. Polaris had great success with the coming of the first true sport S x S in the RZR and was even having trouble keeping up with the great demand and had to pump up production to please a growing number of interested people. Word of mouth and buzz for it on the web popularized the miniature rally car, faster than any publicity campaign could have ever accomplished.

An able beast
Trust me, this new awesome looking 2009 Polaris RZR-S version rides as good as it looks and can achieve more than you would imagine. Four wheel hydraulic disc brakes do an excellent job at stopping in great control at the pedal and perfect balance front to back. I could truly race it as a rally car on carefully chosen flat trails and sometimes using both feet and late braking with a tug on the wheel to make the back end start the slide, and then punch on the gas for a full long curve on a drift.

Man, it just doesn’t get any better than this. Or will it? You can bet a few other manufacturers will dive into the mix and present us with some cool rides as such in a near future. Despite its obvious sport orientation and amazing performance as a race machine, it can still come in handy at work with a decent amount of cargo space in the rear deep sided box and the capability to pull big loads up to 681 kg (1500 lb). Once all done with your chores, you won’t resist the temptation to snap it back to rear wheel drive and hit the throttle for a quick power-sliding departure.  You will need to be conscious of its limits and respect that fun amount of power available. Tipping it over should never happen if you are constantly aware of the surface conditions under you and the traction of your huge Maxxis Bighorn tires. Trouble can arise fast when you are not paying attention. I’ve had a few surprises of my own, where my slide would be broken abruptly by a change in surface condition.

For example, going from dry to wet sand, or from flat and dusty to dried mud ruts, one foot deep and hard as concrete. It can happen real fast if you’re not on familiar grounds. In this kind of situation, the faster you were going, the faster your reflexes will have to be to counter the tilting motion by steering in the same direction, and since this is the case, you might also need to then return the opposite way just as quickly so not to hit anything that was outside of that turn. Yes, I did have to do such a little dance to stay in one piece on one occasion and the S responded so well to my panicked reactions that the whole event seemed uneventful. Then a terrifying thought came to mind, what if I had been coming in just a tiny bit faster? I wouldn’t have been able to save it for sure. Don’t be attacking an unknown blind curve full on. Even experienced ATV riders will need to take it easy as they get acquainted with the controls, which are much more closely linked to driving a rally car than a straddled ATV. My best advice is to go at it very easy getting into turns, and enjoying blasting out of them instead.

Jumping for joy
If even more thrills are desired, then jumping is something that can be done safely with this ridiculously able suspension system. The same gradual approach should be taken here, and you should only try very small attempts at first to get a feel of the machines behaviour. As they would say on TV, don’t try this at home, but the 2009 Polaris RZR-S is capable of clearing a huge MX track 50’ tabletop in a breeze.  The 2009 Polaris RZR-S is truly a dream come true for countless off-road sport aficionados without the means or space for a full size 4×4 pick-up truck. Coolest thing is, it will actually conquer a much more diversified range of exploratory challenges. Have fun and most of all, take good care, and don’t ever, I repeat EVER, slip that thing into gear before your helmet is securely fastened and that your seat belt is on!