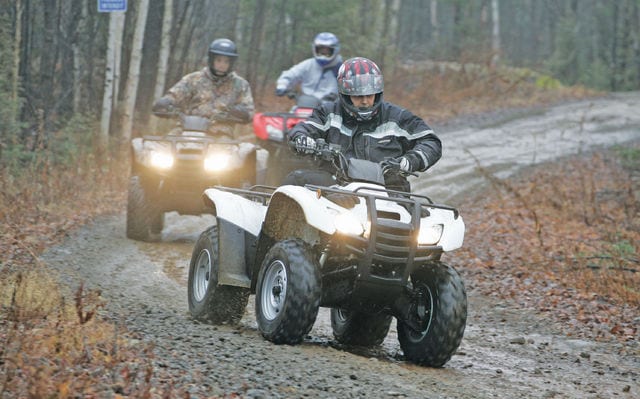 As always, the Honda team made few visible changes to their Quad line-up, which sort of takes away some of the natural excitement, a media product launch normally creates. Adding to the monotony, the dense fog was steeling away all the grandeur of this usually amazingly beautiful mountainous landscape, surrounding Lake Sacacomie in Québec. The immensity of the Sacacomie hotel and resort was also hiding behind the humid shroud, normally looking like a giant’s toy log cabin with 109 rooms and suites. It was still impressive, but only a section at a time.  Huge 4 feet wide pine logs are stacked to create a warm and cosy feeling not normally felt in such a big hotel.

Offering models specific to a certain country’s demanding conditions was a very innovative idea when Honda came out with its first Canadian Trail Edition models, a few years ago. To better enjoy and suffer the beatings of Canadian trail riders, who are known to be very hard on their quads, for 2009, four such CTE models are offered. For these demanding riding fans, the Japanese manufacturer proposes the TRX500FG CTE, equipped with a selection lever for 2 or 4 wheel drive mounted on the left side under the handlebar, and equipped with the GPScape system. The TRX500PG CTE adds the electric power-assisted steering to the list of interesting characteristics of those sturdy rides. The two other models of the Canadian Trail Edition range, the 2009 Honda TRX420PG CTE with electric power-assisted steering and 2009 Honda TRX420PG CTE with traditional non assisted steering, return to us in 2009 with a bonus: an all new four wheel independent suspension system. A white (not for long) 2009 Honda TRX420PG CTE would be my media test ride on this eerie foggy and cold autumn morning.

For the most part, changes were brought to the suspension, especially set to provide a maximum level of comfort without compromising ride stability in general. The shocks, exclusive to these Canadian market destined units, were designed with knowledge gathered through extensive testing in Quebec by Japanese engineers. These shocks are non-adjustable as is the case with most Honda’s, but they were designed and tested right here taking our true to life conditions in consideration. I very much agree with Honda’s approach which leaves such tasks in the hands of the experienced.

For them, the right challenge seems to be finding just the right balance of everything to make that specific chassis and motor assembly handle in the best and safest manner possible, in as many different conditions as possible. Truth is, too much adjustment capabilities in the wrong hands can turn a perfectly sound and stable ride into a very bad and sometimes even borderline dangerous one. Such vehicles, being as small as they are, will be greatly affected in their performances in handling when even the slightest changes are done to the suspension’s parameters. Of course the geometry stays unchangeable, but merely permitting the rider to set the front too soft and rear too stiff in comparison would turn this quad into a dangerously dippy one. Maybe these delicate settings, are, better left to the experts.

The fact that this fairly small quad (or at least it felt that way) was equipped with a fully independent suspension called for caution or at the very least, the knowledge of its presence and the differences it might cause in the handling. I was quick to throw the ride from side to side at moderate speed to get a feel for how the power steering and independent suspension combination on this mid-size quad would compromise the stability and the sport feel claimed by its maker. Oddly enough, this arrangement seemed very sound and safe even when purposely omitting to counter weight as would many beginners, even letting my body droop down to the outside nonchalantly, without ever feeling it was too dangerous. I suspect this ride’s very low center of gravity, mostly obtained by the longitudinal design of the engine, is one of the main reasons why this whole package stays safe and stable enough despite the inherent tipping effect of independent rear suspension.

A peppy new transmission
For 2009, the TRX420 also receives a new automatic 5 speed automobile type transmission equipped with Honda’s famous ESP system. Recreational riders will really enjoy the 2009 Honda TRX420PG CTE innovative twin-clutch transmission design. Keep your thumb on and you will feel a very distinct yet smooth transition from gear to gear that keeps the fun factor high even when you’re not in push-button shift mode and frantically thumbing the big electric shift buttons at the left side handle. This unique gearbox gives you the performance, durability and efficiency one would expect from this reputable Japanese manufacturer and combines the direct feel of a manual transmission with the ease-of-use of an automatic. When pushing the ride harder through tougher sections, the manual selection of gears quickly became a hassle and I realized that the auto mode was doing a better job than I was at choosing the right gears at the right moments.

The system isn’t infallible though, as here with this white unit I stayed stuck between gears for a little while with a flat bar displayed on the LCD screen. This wasn’t the first time this happened to me on a Honda, but it never seemed something to really worry about as a bit of a shake of the ride front to back as I would keep thumbing the shift buttons, always did the trick. I’m confident that this glitch wouldn’t leave you stranded stuck in neutral at any point, but it’s still something our friends at Honda should look into.

A flick of the switch makes it possible to choose from manual push button shifting to full automatic. In addition to its far from common lightweight construction, this gear box uses two clutches. The first is a centrifugal type which is used to transmit power, while the second allows a light slip which softens the changes of gears. This system, controlled by electronic module, is said to be much more reliable and maintenance free than a typical drive belt type automatic transmission. The feel of it is totally different, much more similar to what you would feel when accelerating in your car, a smooth yet very obvious passing from a gear to another. I personally prefer the more fluid feel of a belt drive but if I would be far out away from civilization, I would definitely feel more comfortable with this more reliable by nature transmission.

I first concentrated my observations solely on the handling and driving aspects of the ride and was completely pleased with the results. Boy was I throwing that thing around aggressively after just a short while on it. There wasn’t a hint of surprise reactions to sharp changes in terrain but although the power steering was great to lessen front wheel grab on rocks or tree stumps, it does cancel out feedback to the rider quite a bit, which is an element beginners should keep during the learning process by opting for the non assisted FG model.

The amount of power provided by Honda’s same good old longitudinally positioned single-cylinder four-stroke 420cc engine is right on the money; that is if one accepts to stay within the boundaries of what Honda engineers choose to be the logical maximum. Enough to have a bit of fun but nothing to send the front wheels up in the air upon jamming the thumb throttle to the max. When it comes down to having just the right balance of all the elements affecting driving ability and security in the use of an ATV, Honda’s TRX420PG Canadian Trail Edition really does a great job. Handling abilities versus power ratio and delivery, stays within logical limits for this type of vehicle and becomes very appealing not only as a beginner’s first ride, short term rental unit or a trainer, but also as a dependable workhorse or better yet, throw in that very simple to operate GPscape system as standard equipment, and the ride becomes a hunter’s dream partner. A small side note: beginners should be warned of the importance of using proper counter weighing techniques in turns on rides equipped with independent rear suspension such as this one.

This was by far the safest a quad, has ever made me feel while riding in the very diversified ground conditions we encountered in the beautiful lake Saccacomie area. That sense of quality and reliability Honda is well known for really transpired from this ride’s predictable behaviour in very different situations. The only improvement I would love to see is better undercarriage protection and/or a bit more ground clearance. Enjoy! For many, many years!