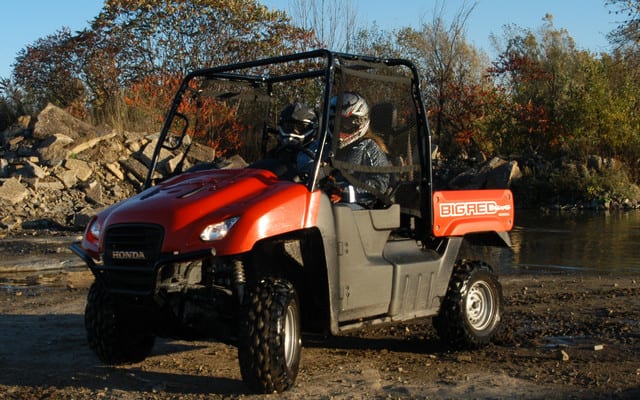 The fact that my Big Red is still good and ready to help out with small chores at a moment’s notice, says quite a bit about Honda’s talent for producing some of the most reliable and toughest vehicles on the planet. My Big Red isn’t pretty in red anymore; it’s a 1987 three-wheeled version that was since repainted in an awful attempt at camouflage. Way back when it was still gleaming red, it was pioneering the idea of banking on the utility capabilities of ATVs, and was directly responsible for the ever-growing success of this particularly popular segment of the vast ATV world of this still expanding market. Well the Big Red is back! Bigger and more utility driven than ever, but this time in the form of Honda’s first side x side vehicle.

This fairly new type of format for quads, has been enjoying quite a bit of success, since Yamaha came out with their popular Rhino “Side X Side”. Mostly targeting work- oriented applications, it was yet always suggested that they should also be used for simple fun trail times in a shared enjoyment experience. As with its smaller cousins, regular ATVs, these vehicles are tremendously adaptable to specific applications and the possibilities where and when they can come in handy are endless! Arctic Cat, Polaris, Kawasaki, Kymco and others have since followed suit and luckily for us, the growing amount of competition in that segment has been pushing it forward by leaps with more choices, sportier models, or more “blinged” out rides, and now this fine addition from a time-tested and trusted company called Honda.

While all are pressed to impress, with cool add-ons on their versions of what a side by side should be, this model brings quite a different new approach to the whole UTV experience. Fact is Honda even calls theirs an MUV, which stands for Multi-use vehicle, surely looking to further distinguish it even more. It is certainly basic in looks, but highly advanced mechanically. Honda’s expertise in automotive manufacturing was surely a big advantage they could and did profit from, and this was apparent soon into my first ride with the Big Red.

How well does it drive?
The first obvious difference with others is a transmission that operates and feels much more like that of your daily road commuter. The shifting of gears is smooth but very distinctive. It uses a hydraulic torque converter and three hydraulic clutches controlled by an Electronic Control Module (ECM) that automatically selects one of three Forward gears or Reverse. This ECM monitors vehicle speed, throttle opening, engine rpm, gear selector position, brake application and engine oil temperature and shifts electronically to the proper position in accordance with these instantaneous readings. Its true appeal is that it needs no maintenance at all, since there are no belts to wear out or replace and that it features a filtration system protecting against external contamination. It uses multi-filtered engine oil as hydraulic fluid. This system not only provides positive engine braking, but it significantly reduces maintenance needs, compared to a common belt driven CVT (Continuously Variable Transmission). The gear selector on the dash works well and it’s a good idea to keep the other handle right next to it in 2WD turf safe mode to minimize scrub on the ground, in 4WD with the rear wheels locked and front open, or true All wheel lock mode when the going gets tough.

I just had to try and see how far the tipping point was on this one. I’ve made it good practice to get a feel for how a certain side x side reacts to sharp turning, testing its behavior by going around in tight circles on a soft patch of grass or in somewhat loose sand or dirt, and progressing up in speed until wheel lift is felt or noticed by my friendly regular onlookers. So far, the best performance in this sort of test was obtained with a Polaris RZR-S. It has a 60″ wide stance achieved with longer arms and a much better suspension system than on their basic RZR. Of course I couldn’t just floor the Polaris, as it would just start doing donuts and dust up the whole place. So, I had to accelerate very gradually using that one and it was pretty quick to lift the inside rear wheel. Flipping it was very much a possibility, but one would really have to be trying though. So here I was, feeling that the weight of my body was sitting much higher in the Big Red, and truly expecting it to be somewhat easy to provoke the start of a roll over.

Oddly enough, I ended up getting dizzy before succeeding. An important factor to mention is that I was operating in 2WD mode and that the risk of roll over is always much greater in 4WD, as it creates a lot more bite at the front wheels. Here I was, pedal to the floor, steering locked as far as it would turn, and nothing was happening. Except for me cracking up and feeling totally ridiculous as I uselessly continued spinning around and around. If I would have tried the same thing with any other UTV, it would have rolled over for sure. The 64 inch width and excellent mass centralization kept the Big Red solidly planted to the ground, even when doing that same turning test to the right, with my body weight on the outside.

To answer the question; the Big Red drives extremely well and is easy to steer in easy to moderate trail conditions. It doesn’t shine as much when in extreme trails and is way harder to steer in 4WD mode.

How well does it work?
Lifting the tilt-bed is just as easy as accessing the air filter for maintenance, which pops in plain view when the box is up. There is a self-locking handle on each side and I had long enough arms to operate the driver’s side from my seating position. In my case an effortless jerk upwards on it was enough, despite the 15 or so good sized logs I had in there, as the hydraulic shafts helped to push it up. The Big Red is a very strong machine, and seeing one with a monstrous snow blower up front, at the latest ATV show, was truly telling of how some are quite confident that this vehicle can take just about any sort of abuse in a working environment. It has a heavy-duty two-inch receiver-style hitch with 544 kg (1200 pounds) towing capacity.

It will get you to your secret fishing spot or easily carry your large game from out of the woods, but it doesn’t have all that great terrain conquering abilities. Its wide 64 inch stance means the bottom is quick to rub on rocks, tree stumps or fallen logs. The rear suspension arms could use a little more protection, I heard them getting beaten up a few times. It truly outshines all others in stability, but this in turn makes it less able than many other rides in very tight and challenging areas.

To answer the question, the Big Red is a tremendously efficient working tool. That’s what it is truly made for.

How well does it ride?
The Big Red has a very roomy cab and the steering wheel, gas and brake pedals, and dashboard mounted shifter all come together in a nice ergonomically correct fashion. The cup holders are sadly only deep enough to be useful when you are parked. Despite my very tall stature, everything felt comfortable except for the automotive style three point seat belts that seemed to become too sensible when the riding got rougher. This ride is obviously bent on staying calm, even when the driver tries to get a little crazy and the rev-limiter was pretty quick to engage. It just won’t let you go over its intended maximum speed of about 60 km/h. It’s no thrill giver, but we still enjoyed every moment spent driving it.

This is not the most comfortable suspension I’ve experienced but it does its job well. Stability in turns was obviously something very important to the team of engineers working on this challenging project. It was brilliantly achieved with very good mass centralization and an extra wide 64 inch stance which might not be perfectly suited for extreme all terrain riding conditions but the good tires and ample low-end torque from the big single mean that it can still conquer just about anything you throw at it. The size is unpractical when time to carry it around, since it won’t fit in a pick-up truck box, but it’s a small price to pay for the amount of extra stability it procures.

This is a machine with performance characteristics that, in a sense, impose safe driving. For example, a hard press on the throttle won’t send the back end sliding. Aggressive moves with the steering wheel seem dampened by an extremely well-designed system that feels like it has a power steering unit when in 2WD mode, but becomes radically heavier in four-wheel drive. Even a pull on the hand-operated park brake, placed right where it should be, in between both seats, won’t lock up just the rear wheels for a harmless little slide, but rather all four disc brakes will very efficiently stop the whole thing dead in its tracks. Even in the event of a hydraulic braking system leak, your Big Red will still brake, thanks to a hydraulic system that is separated in two distinct brake lines. This dual-circuit automotive-style design ensures that you get one front and one rear wheel braking in the event of any hydraulic failure. And last but not least, you and your passenger will be well protected with composite plastic doors and side netting, which are standard equipment on the Big Red and it’s a shame that most other such vehicles don’t have any.

Honda again took a noble position in offering what is by far the safest side by side yet, but in the process they have ended up with a vehicle that can be tremendously appealing to people in need of a reliable worker, but lacking in excitement for recreational type users. I’m hoping they try and take sort of the same great mass centralization and adequate width approach, and build a sportier MUV. Remember the Honda Odyssey 250 and 350 models? Wouldn’t that be another cool name for Honda to bring back to life?!