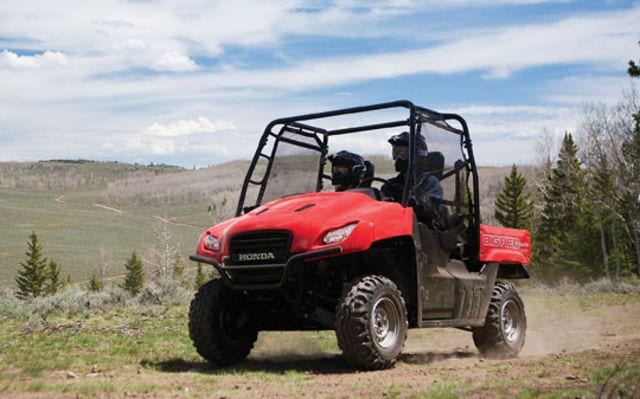 Honda’s legendary fit and finish has now entered the UTV realm. Unprecedented utility capabilities combined with a healthy dose of recreational ability, is what the inventors of the ATV wanted to provide with the return of BIG RED. A name synonymous with reliability and hard work first made very popular through a three-wheeled ATV that stands through time with units still working hard at this very moment, here and about.

BIG RED’s innovative automatic transmission unit features several aspects specifically designed for MUV application. It offers plenty of options so drivers can match usage to specific terrain or conditions. Operation of this drive system is kept simple and easy, through a convenient dash-mounted drive selector. The selectable drive modes include: 2WD with open rear differential for sensitive terrain and lawns; 4WD with rear differential lock for rough conditions; 4WD with all-wheel differential lock, when you need that something extra to climb or get through a messy trail. The hydraulic torque converter used in this system operating with the same principle as torque converters used in automobiles, links the engine to the automatic transmission much like a manual clutch connects the engine to a manual gearbox. Three hydraulic clutches are used and an ECM to automatically select one of three forward gears or, of course, respond to the driver’s demand to switch in reverse.

The ECM monitors throttle position, vehicle speed, engine rpm, gear selector position, brake application and even engine oil temperature, for optimal automatic gear selection to give the driver the best possible traction and power ratio at all times. BIG RED also incorporates a shaft final drive, which in combination with the three-speed automatic transmission provides positive engine braking. Honda claims this is a much more reliable alternative to electronic engine braking systems.    Abundant torque and dependable power can be expected from the 675cc liquid-cooled OHV four-stroke engine that powers the rugged looking BIG RED quickly forward, thanks in part to the four-valve cylinder head design which provides a sufficiently broad powerband. Don’t expect to make the wheels spin in a frenzy when you floor the pedal, you won’t be powersliding with this thing, it’s just not what it is built for. The monstrous big-bore single-cylinder with a bore and stroke of 102mm x 82.6mm, should offer consistency over a wide range of climate conditions, since its temperature is always kept optimal with the addition of a liquid-cooled oil cooler that aids heat dispersion in the engine.

The liquid in this system warms faster than the engine oil, so it also helps to speed up the warm-up process in colder conditions and cools the oil on hot days. The lightweight aluminium radiator is located behind the front grill for best protection against the elements.  Adjusting to many variables automatically in a seamless fashion, Honda’s (PGM-FI) programmed fuel injection system keeps things running smoothly at all times despite operating in very different conditions. Temperature compensation is from -13° to +104° Fahrenheit and altitude compensation is good for up to 12,000 feet. Honda’s (PGM-FI) is a mapped injection system, that basically reads engine speed and throttle angle and feeds it to the Electronic Control Module (ECM), which in turn adjusts fuel delivery according to four additional variables, such as: intake-port pressure, engine coolant temperature, intake-air temperature and atmospheric pressure. To maximize fuel atomization, the system uses a 40mm throttle body and a high-tech 12-hole fuel injector.

In addition, smoother idle control is obtained, thanks to the Idle Air Control Valve (IACV), which establishes a basic idle setting at around 1400 rpm give or take 50 rpm. To favour a lower center of gravity and enhanced handling, Honda engineers placed this innovation rich powerplant in the center of the frame and also reduced its height by positioning the camshaft adjacent to the cylinder head and using pushrods to actuate the valves.

Advanced chassis design
The Independent double-wishbone suspension system at the front and rear provides an exceptional 10.3 inches of ground clearance. Still, we were clipping rocks with the unprotected rear arms quite often. Variable-damping shocks offer 5.9 inches of travel in front and 7.1 inches in the rear. To stop this Big, 1431 pounds, red (or Natural Gear camouflage schemed) workhorse efficiently and with predictable stopping power with a good, progressive feeling, again Honda used the experience gained through the years as an automobile manufacturer in creating an hydraulic disc braking system that features a balanced automotive-style design that ensures front and rear braking despite brake line failure.

A nicely positioned automotive style right-hand-operated parking brake actuates the brake calipers hydraulically so adjustments need ever be made to compensate for parking-brake wear. Calipers feature a patented built-in scraper system that helps prevent debris build-up between caliper and rim. All four wheels are the same 25 x 10-12 inch size, which also contributes in giving it good ground clearance.

Always at the ready for work or play
For minimal maintenance, Honda put in a maintenance–free 12-volt 12 amp battery and used shaft final drive for worry free power transfer to the wheel. Oil-filler and dipstick are accessible quickly by detaching the driver’s seat and access to the high-mounted air filter box is as easy as lifting the rear tilting cargo-bed. Security was of course something Honda engineers made no compromises on. BIG RED features many other technologies inspired by their extensive knowledge in automotive conception, such as a fuel system shut-off and three-point Emergency Locking Retractor (ELR) seat belts similar to automotive type belt systems.

The Automotive-type fuel system shut-off and seat belt release mechanisms are designed to protect and facilitate occupants in the event of an inadvertent roll-over. Sadly, seat belts seem set too sensitive as mine would painfully sink in my shoulder at every good sized bump or instantly when the brakes were applied. I toughed it out, but saw others opting to keep it on but flipping that part of the belt behind their back, which is definitely not a good idea. Contouring the occupants is BIG RED’s uniquely designed, four-pillar, six-piece 41.3mm-diameter (1.6”) Occupant Protection Structure (OPS). Good sized seats and a roomy cab are among the advantages offered by Honda’s first attempt in this thriving segment of the ATV industry. A waterproof accessory socket is conveniently placed between the bucket seats for easy access to 12-volt power. I was surprised to see that their cup holders weren’t a logical minimum of 5” deep; my water bottle quickly flew out of it.

The BIG RED’s tilting bed can suffer a 500-pound load capacity with lots of features to make it work better for you. A steel frame for extra toughness, sheathed in a tough, moulded polypropylene top plate with no wheel-well intrusions making a standard cargo pallet fit nice and flat with room to spare. This no-rust 6.5mm-thick top plate also has rounded corners for easier cleaning, and four handy D-rings to secure cargo. The spacious tilt bed measures 33.0 by 52.6 by 10.3 inches and it can be tilted up from any side with release handles that are located on both the left and right sides for easy operation. A progressive action strut assist system makes raising and lowering the bed smooth and easy. In addition, Big Red features a heavy-duty two-inch receiver-style hitch with 1200 pounds of towing capacity. For night time operation, a multi-reflector headlight system and LED brake and taillights provide optimal illumination. Of course, Honda has a complete line of accessories to render your new BIG RED your own, with everything from hard or fabric tops to even a back up alarm.

A lockable aluminium 80-liter tool box, two-piece folding windscreen, center console storage pouch, rear cab curtain, horn kit, LCD instruments with gear indicator, odometer, hour meter, trip meter and speedometer, and a 4000-pound pulling force winch kit by WARN®, just to name a few. The BIG RED comes in red or Natural Gear™ Camouflage. With its multiple patents and numerous automotive-based technology features, the new 2009 Honda BIG RED is destined to become the MUV of choice for many in search of great utility capabilities, as well as good recreational abilities. In the same spirit than his 3 wheeled predecessors, this larger BIG RED should again become a common sight for sore eyes in countless working environments, and keep at it, for many years to come. Long live the BIG RED!