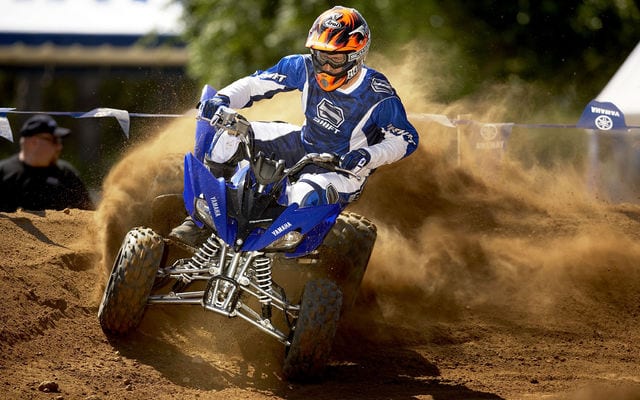 If there was one ATV that helped new riders into the sporty side of ATV riding more than any other, Yamahas’ Blaster 200 would be that ATV, and for two decades the nimble Blaster held a virtual lock on the category.  Countless numbers of smiling new riders itching to take to the trails and the track on a machine that could offer a true sporty ride eagerly clambered aboard their Blaster, and began honing their skills. Along the way, they learned how to slide into a corner, how to jump, how to use a single finger on the clutch just right in order to stay in the power band, and how to attack obstacles on the track or trail.  They also learned mechanical skills as well, and changing the oil, cleaning the filter, and adjusting the chain, further refined their new skills, and educated them on how their ATV worked. Treat it well, and you would be rewarded with an almost indestructible ATV; treat it badly, and you would pay the price of repairs.  The Blaster 200 was the perfect teacher. There was one big problem however, and it had nothing to do with the Blasters performance, reliability, or sales. Just like its bigger brother the Banshee 350, the Blaster 200 was powered by a 2 stroke engine, and clean air restrictions were making 2 strokes disappear like leaves on a windy fall day.  Emissions standards had made the old engine design obsolete, and it was time for a major change. It would take an all-new model worthy of Yamahas sport ATV history, and the Blasters legacy, to earn the Yamaha flagship blue colors.

DNA TRANSPLANT
Growing up in a family already stocked with highly successful siblings is never easy, and with it’s older brothers, the race winning YFZ 450 and the Raptor 700, any new sport ATV would have to be something special, or it would be seen as the black sheep of the family. After all, the YFZ 450 had been dominating races since it first showed a wheel on the track, and the Raptor 700 owns the dunes, and is our all-time favorite play quad. While most of the other manufacturers simply grab a utility ATV platform from their lineup, slap on different bodywork, and then re-badge it as a “sport” ATV, that was not going to work in the Yamaha family. The new sport ATV would be just that; all sport. That meant no CVT system, a manual clutch, chain drive, disc brakes, and everything else that defines a sport quad, including a racy look to go with it. The engine would also have to be a quick revving 4 stroke motor with outstanding reliability, and the chassis design would feature aggressive handling, and light weight to complete the package. In homage to its’ racy DNA, the new model would be called Raptor 250, and it would born from the heart of the Yamaha sport lineup, yet ideal for new sport riders to hone their skills on.

The base of the Raptor 250 would be an all new chassis, and the goal was both light weight, yet superb strength, in a package that would flex just enough to not fatigue the rider. Although the main chassis members are a high strength steel, because of a very clever design, at only 22 pounds, it is lighter than any comparable aluminum chassis could be. In fact, the entire vehicle weighs in at a svelte 313 pounds, which makes the Raptor 250 the lightest sport ATV ever, and almost 50 pounds less than its closest competitor, the Honda 250EX. Its even 13 pounds lighter than the Blaster it replaces! The new Raptor 250 is actually in a class all its own, and it sets a new standard for the entry level sport ATV category.  Suspension on the Raptor 250 is similar to most other sport ATVs, and at the front are a pair or preload adjustable shocks with 7.5” of travel, while at the back a direct link swingarm has 7.9” of wheel travel. One of the best features is the chain adjustment system however, and just like its big brothers, it gets an eccentric adjuster. It doesn’t get any more reliable or easier. When it comes time to bring everything to a quick stop, thankfully Yamaha went with disc brakes all around, and the master cylinders are the same high quality units found on the Raptor 700 and the YFZ 450.  First class all the way!

Engine design is always an extremely expensive, and often an extremely painful process for any manufacturer, as designs are tried and tested, seemingly over and over again as the new engine is perfected. With reliability being a huge factor for the new Raptor 250, Yamaha wisely went with an engine already in the lineup, although it had never been offered in an ATV, or in North America. The engine for the new Raptor 250 had been in a European trials motorcycle for a couple years, and at 249cc, the electric start, two-valve, four-stroke motor was perfect for the new ATV. It featured good low end power, light weight, quick revving, and although the engine is air cooled, it does utilize a wet sump system, and an oil cooler is tucked neatly under the front cowling. A 29mm Mikuni carburetor mists fuel into the ceramic composite-plated cylinder, which helps with heat dissipation and longer engine life. The air filter and intake tract are found right under the seat, and the foam filter is super easy to remove and clean.

One of the things we like best about the Raptor 250 has almost nothing to do with performance, and everything to do with how it looks.  The styling is excellent, fits well, is comfortable to sit on, and in our opinion, makes the Raptor 250 the hottest looking sport quad ever. The tank area is extremely narrow to let the rider move around easily, and a solid set of steel pegs anchor your feet. In fact, the pegs are the same as the YFZ 450. Since the Raptor is designed for less experienced or new sport riders, it is also slightly smaller than its brothers, which can make a full sized guy feel a little cramped, but for younger or smaller riders, it’s perfect! We almost want one just to look at, but that would only last a short while before we caved in and had to get it dirty.

OFF to the RACES
You had to know that the first place we wanted to ride the Raptor 250 was at the motocross track. After all, aggressive sport riding on the trail or the track is what it was designed for!  Flip on the key; hit the switch, and the motor growls to life. Snick it into gear, let out the clutch to get you moving, and off you go. Then it surprised us. Even though the Raptor 250 is an entry level sport machine designed for new riders, it feels so natural that it takes no time at all to become confident in what it, and you can do. Although the motor is a smaller displacement 4 stroke, it actually has much better bottom end than we expected, and careful use of the clutch will launch you out of corners with ease. The Dunlop tires that were specially built for the Raptor 250 do a decent job of getting the power to the ground and holding their line, and they also help the suspension soak up any rough sections. We jumped the Raptor over small tabletops and doubles, and it is possible for a full sized guy to bottom the shocks with bad landings, but that is more of a reflection of our weight exceeding what it was designed for.  Also, we aren’t exactly a new rider who would tend to weigh less and attempt to jump less, at least for a while anyway. Where the Raptor 250 really shines is in the air however. Takeoffs were perfect, as were most landings, and in flight the Raptor 250 flies like the bird it is, perfectly controlled and predictable. Because of its light weight, it was very easy to throw around in the air, and to push into the corners. It’s almost too bad they can’t use the “Blaster” name with this model as well, because it is an absolute blast to race around the track on, and it never does anything crazy. For new sport riders, it’s perfect!

A NEW DEFINITION OF FUN
The Raptor 250 is one of those special models that make us think ‘If I had only been riding one of those when I was a kid!” It does everything well, and it’s the perfect platform for new riders to learn their skills on, and then take those skills to the YFZ 450, or the Raptor 700. Along the way they’ll be able to add after market upgrades to make it even better, and Yamaha is also offering upgrades of their own under the GYTR line, and a couple special edition models that feature different color and graphic schemes. Every day riding the Raptor 250 is virtually guaranteed to be a new definition of fun however, and for new sport riders, it’s simply not going to get any better. Nothing else even comes close!