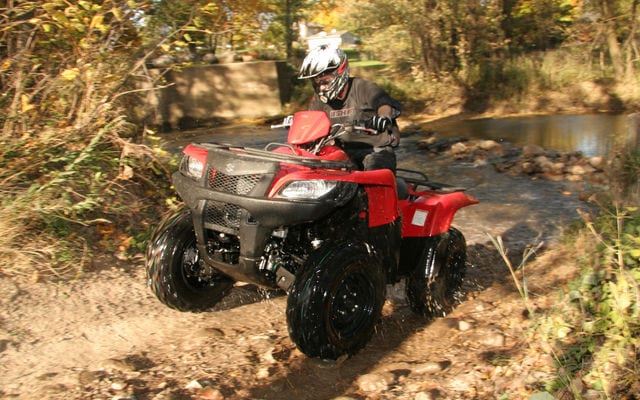 There are many very good quads in the lineup of every ATV manufacturer these days.  Some have good power, some ride and handle well, and some can carry more cargo than a pack mule.  The really great quads can do all that and much more however, and those are the models on the very short list of ATVs we want to take out every weekend.  The Suzuki KingQuad 450 is one great ATV.

It’s been a year since the release of the 2008 Suzuki King Quad 450, and in that time we’ve tested it on the trails, in the mud, around the farm, and every place else that looked like it would be a good workout for the Suzuki. When a model is all new from the ground up like the KingQuad 450, and features a new engine design as well, we’re especially concerned about long term reliability of both the chassis and the new power plant, and we want you to know exactly what to expect. We will find any problems with a new model.

BIG BROTHER
Since its release, the KingQuad 700 (Now 750cc) has been at the top of the utility world in almost every category. It rides great, has excellent power, is as reliable as a good horse, and can do most anything asked of it. We’ve had one for years, and it has never let us down.  When it came time to design a new 450cc machine worthy of the KingQuad family name, Suzuki already had a winning platform to work with.

Just like its big brother the KingQuad 750, the 2008 Suzuki King Quad 450 features a high tensile strength steel frame with fully independent suspension at every corner. Bodywork is essentially identical to the 750, as is control and seat layout, suspension, storage, and the steel rack system which is powder coated in “wrinkle black” for supreme durability. There are a few differences however, and one is that the 450 comes with very strong steel wheels, again powder coated black, and in running them through rocks, over logs, and hundred of other trailside obstacles, we’ve scratched them, but never bent one. We doubt an aluminum wheel could make the same claim. Another difference is that the 450 retains dual headlights just under the front bodywork, but does not have the handlebar mounted center light that is found on the KingQuad 750. There are a few other minor changes as well, mostly where a new steel part replaced an aluminum part on the 750, because overall weight on the 2008 Suzuki King Quad 450 (just over 600 pounds) was already going to be reduced simply due to the smaller engine displacement. Other than that, both platforms are nearly identical, and many chassis parts are even interchangeable.

NEW POWER SOURCE
The engine on the 2008 Suzuki King Quad 450 is an all new single cylinder, liquid cooled, single overhead cam, 4 valve, 4-stroke power plant. Bore-and-stroke is 84mm x 82mm making a total of 454cc, and the engine is tilted 48 degrees forward to keep the center of mass low for better handling and to help provide a perfectly straight air intake tract, which improves airflow. Most of the engine is well protected by the bodywork, but a backup pull starter is found on the left side of the engine, just above your foot. We’ve never used it, and you’ll probably never need it as well, since battery maintenance should be no problem with the battery and electronics tray found just under the seat. It is nice to have a backup plan in an emergency however. Oil changes and air filter maintenance can also be performed rather easily, and just above the radiator cap is a little access door for a quick check of the coolant level as well. Even the rear differential has a dipstick right where you need it! One of the features about the new 2008 Suzuki King Quad 450 is the fuel injection system, and it works perfectly. In fact, the production model we have been riding actually runs a little more clean and crisp than even our test model at last years introduction near the Suzuki plant in Georgia. We believe they actually leaned out the fuel injection mapping a little for better performance, longer mileage, and cleaner emissions. (They did the same thing on the LTR 450) It starts and runs excellent at all temperatures and elevations, and we never  miss looking for a choke in colder weather. Throttle response is always very good, and power delivery is very predictable and controlled. Predictable control is a huge factor for any ATV, but for utility quads an important consideration is engine braking, which can be both a curse and a blessing. Kind of like one of those girlfriends that drives you nuts in both a good and a bad way. On the 2008 Suzuki King Quad 450, Suzuki incorporated a system to control engine braking that will help slow you down by minimizing freewheeling on steep descents, but will not cause a huge drag when backing off the throttle.

The 2008 Suzuki King Quad 450 offers 3 different available drive modes for any type of terrain you will ever encounter. Most of the time 2 wheel drive will take you anywhere, but when it gets a little slippery, slip it into 4wd. However, when it gets really nasty, a flick of the right thumb will engage the locking front differential and four-wheel drive. If it gets any worse than that, consider a winch. The transmission on the 2008 Suzuki King Quad 450 is a CVT system, which Suzuki calls “QuadMatic”, and features a heavy duty V-belt and centrifugal clutch for fully automatic operation. The belt spins on two variable-pitch pulleys, which based on engine RPM and load, constantly adjust themselves to keep you in the heart of the power band necessary for the job at hand. Gear selection on the fully automatic transmission is as simple as sliding the left hand lever out of Neutral and into either High, Low, or Reverse, and off you go. It’s the best in the business, and always works perfectly. Simply grab a brake, and slip it into a gear. One thing we really like about the Suzuki transmission over other models is that you don’t have to take your right hand off the bars to shift, which is especially great for plowing snow or anything that requires lots of shifting from forward to reverse. It’s excellent! When it comes time to stop, hydraulic disc brakes are found at both ends, and at the rear the brakes are enclosed in an oil bath multi-disc system that we can all but guarantee you will never have to change. It simply works and does not wear out!

TO THE TRAIL
From the moment we climbed aboard the 2008 Suzuki King Quad 450, everything felt completely at home. Maybe that was because we are so familiar with the KingQuad 700 and 750, but everything is exactly where it needs to be. One feature we really like is the large digital center mounted display that shows gear selection, mph, engine conditions, fuel, and some functions like trip mileage that can also be reset.  It’s easy to read while underway, and we definitely like that.  Just off your right knee is a 12 volt accessory outlet, and a small, sealed compartment that should keep anything inside it dry. For larger items the Suzuki features a larger water resistant compartment just under the rear fender. We use both all the time, and it’s impossible to have too much storage on a utility ATV. Bodywork on the Suzuki extends all the way down to a sturdy serrated foot peg, and the floorboards offer several large drain holes for mud and water to pass through. In muddy or wet conditions however, the riders’ feet and legs are well protected in all but the most severe conditions. You really have to go in deep to get wet on the Suzuki, which of course we did several times. We wanted to know what it could handle!

MINOR CHANGES
By now you know we really like the 2008 Suzuki King Quad 450, but it’s our job to tell you everything, and there are a few things we would change. The biggest item would like to see changed is the rear tires. The Suzuki comes with a set of 25” Dunlop tires featuring a tread pattern designed for a smooth ride, long life, and durability over nasty, sharp edged terrain, and for that they work fine. However, when the trail gets slick, sticky, or it comes time to slog your way through the mud, you’ll wish you had something better. (The stock Polaris 500 tires come to mind!). The 2008 Suzuki King Quad 450 doesn’t run out of power, but it will run out of traction, and many times the rear tires would load up, and we would simply sit and spin. Get a better tire if it rains in your riding area! The second area would like to see a change is a maintenance item.  Although the Suzuki has a dipstick for a quick check of the oil, nobody told the bodywork design crew about it, and they placed a panel over it. The panel can be removed, but here is the third item we dislike. The panel can be removed, but not without pulling a bunch of those “push-pin” style plastic fasteners and they can be a pain. Regular maintenance is extremely import ant us, and our solution was to Sawz-All a hole through the panel, and we’ve never regretted it! Now we can get to the dipstick with ease! We then visited our local auto parts store, and replaced the push-pin fasteners with a screw in variety.

TIME MACHINE
The 2008 Suzuki King Quad 450 has proven to be a great ATV, and a favorite of nearly everybody who spends much time on it. It’s been extremely reliable in everything from silty dust to water up to the tank, and the filter stays both clean and dry. Regular maintenance chores have also been quite easy, and as long as you show it a little care, it will take care of you. The more time we spend on the 2008 Suzuki King Quad 450, the more we like it, and it will have a home in our garage, and on the trail with us for a very long time.