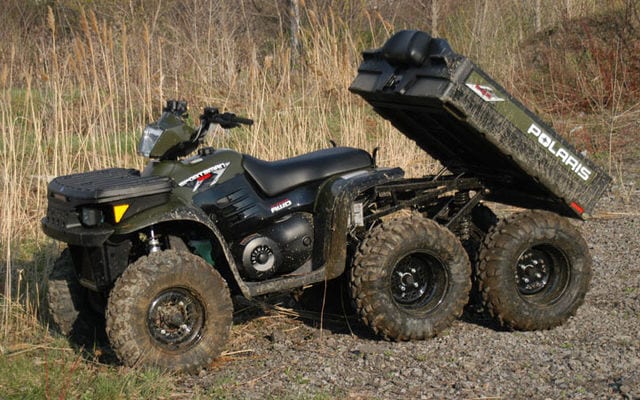 The 2008 Polaris Sportsman 6×6 has mostly work in mind. With all six wheels churning the ground, it lives to ease the pain of all your heavy chores, carrying surprisingly huge loads (363 kg), for you, from point A to point B, wherever those might be. Looks were, of course, of no concern to us at all in this case. No other ATV is quite like it, and the people at Polaris went crazy in creating the hardest working employee on anybody’s staff. Without any hint of a complaint, this one only wants more to haul and carry, pull and push, tow and dump.  Even more useful than full sized truck or tractor, this ATV is truly one of a kind. The practicality of this vehicle is huge. Start it up by turning the key like you would your pick-up. One can throw just about anything in the dump box and carry it around through the worst terrain you can think of. Traction is certainly not lacking and you can tow up to 557 kg with it.

There I was, asking friends and family if they had any sort of yard work or major landscaping projects in mind. It will conquer terrain never before claimed, through swamps and huge mud pools! It is amazing at climbing up steep rocky hills. It can actually be very useful, pulling many other ATVs out of big mud pits with little or no effort at all. It is also great in the snow, as the weight is better distributed through those six fat aggressively threaded tires. It won’t sink as much as a four-wheeled ATV. It is no wonder the US military uses them! The Sportsman 6×6 is powered by a 499cc liquid cooled four-stroke, fed by a 34mm Mikuni carburetor. It is strong enough to push, pull and carry more then you could imagine. Climbing any type of hill is jokingly easy with this monster, but don’t expect a big rush of adrenaline from its acceleration, which is perfectly logical for such an ATV.

It is no vehicle to go too fast with, anyway. Still I had fun trying to forget the extra length behind me, and ended up having just as much fun as on any other normal 500. The front wheels are driven by shaft, while the four rear wheels use two chains. Ventilated disc brakes in the front and back do a very good job of stopping it smoothly and surely, even when climbing down a steep drop with a big load in the dump box. This All-terrain oddity does of course feel very different in handling than a normal four-wheeled ATV. It is big and can feel awkward, while turning on really tight trails, which is not where this ride is most enjoyed, but the huge advantage here is that you can pretty much make your own trail and carry a lot more than with any quad. The four rear wheels obviously work against the steering, pushing it to a straight line constantly, which stiffens quite a bit when riding slow.

The cargo carrying front and back capacities are unreal and the pulling is incredible. This is certainly one to love, having special attachments such as a snowplough attached to it. Loading the back dumping bin, with a good load of gravel, severely affected the handling though, as the four rear wheels wanted to push in a straight line even more, and the front would easily climb into a wheelie when you gave it too much gas. I was loading gravel shovelled directly from my pick-up. On the pavement, I had to jerk the accelerator to make the whole machine tilt from front to back and make the front tires grip each time I was getting off the gas. When it was time to dump our heavy load, we realised that it was much easier to do so while still sitting on the ride. You just grab a hold of each handle; keeping your arms straight and using your legs to simply stand up on the pegs. Not much to complain about on this workhorse, but a few possible improvements did catch our attention. Under carriage protection in the front could be a little better and the grips were quite small for such a vehicle, which will, for sure be used by good sized construction workers, farmers, military personal, etc.

The thumb throttle casing’s cover created a sharp edge grinding the side of my index. Lighting was sufficient, but being able to light all three lights at the same time would have been great. On the positive side, the beast would never falter, starting up easily in varied conditions. A bit of a pull on the manual choke was necessary in the cold, or when the machine was left unused for a while. The hand crank was a nice safety feature and it was almost as easy to start it up that way, then to turn the key. The park brake was very easily applied with only the left hand. This vehicle is amazing for its practicality. It is a handful to control at times, but great for throwing lots of things in the back and going just about anywhere imaginable, in a quick, efficient and fun manner.