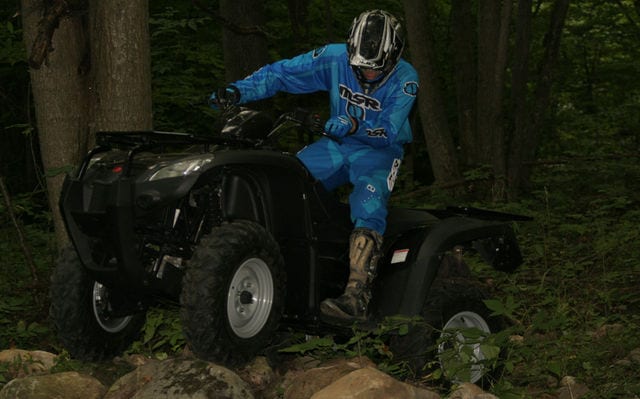 If there is one class of ATVs that the manufacturers covet most, it is the 500cc utility class. Virtually every hunter, fisherman, rancher, woodsman and trail explorer can utilize an ATV, and while more than a few go for the big bore 700cc+ units, they are overshadowed by those who prefer an engine in the 500cc range. Some choose the smaller displacement units based on what they intend to do, some by price, and some are simply intimidated by the power characteristics of the big bore engine. The fact remains though that a big part of how every manufacturer measures their success is through sales gained in the 500cc utility class. Call it the pro class of the utility world. For manufacturers venturing into producing full sized ATVs, it’s also a brutal arena in which they must quickly learn the game, and learn it well. KYMCO is one such manufacturer, and recently they made the jump from the junior leagues of contract manufacturing into pro level competition. Strap on the pads, and head out onto the ice!

Team Building in Taiwan
A little more than a year ago we visited the KYMCO headquarters in Taiwan to see for ourselves what the KYMCO team and their new players were capable of. While there, we inspected everything in several factories from door to loading dock, and came away convinced that although they may be a younger team, the potential to play the game at the highest level was there. They can seemingly build whatever they put their collective minds to, and all they really need is direction. In the case of ATVs, that direction would be just what the end user expects from their ATV.

KYMCO (Kwang Yang Motor Company) is no stranger to manufacturing. Founded in 1963, today they have facilities worldwide, although their primary manufacturing operations and headquarters are based in Taiwan. For many years, they have been one of the major players in the scooter market, and although scooters are their main product line, they do build small engines, and supply products for other industries as well, and they have been in the power sports market for a couple decades. Much of what they learned about manufacturing and the power sports industry was gained when KYMCO was a major supplier to one of the world’s biggest names in the motorcycle and the automotive industry. In 2002 they entered the ATV market with several youth models and even a couple smaller displacement units that they produce under their own name, and for other companies as well.

The KYMCO manufacturing plants we visited were efficient, well organized, and controlled.  Each process would feed the next, all the way through final assembly. Robots did much of the highly repetitive or dangerous work, while skilled employees took care of intricate details like engine buildup. Engines were also pre-fired as part of the operation, data was recorded from each test, and each set of parts marched towards final assembly where once again skilled hands guided them into place until the units began to look familiar. At the end of the line was a new ATV, and a couple lucky employees hopped aboard and headed off to shipping. It was a team effort in every respect. A New Player in the League KYMCO’s plans to release the 2008 Kymco MXU 500 were a clear challenge to the veterans in the sport. A promising young upstart was ready to take the ice, and had plenty to prove. The muscle for the 2008 Kymco MXU 500 comes from a dual overhead cam 499cc liquid-cooled 4-stroke power plant spinning a CVT type transmission. A conventional carburetor feeds the engine, although you can expect that eventually a fuel injection system will one day replace it as they do on more and more ATVs. Transferring the power to both ends is a shaft drive system, and on the front dual   A-arms are found, while at the rear is a solid rear axle and dual shocks. Engaging the front wheels is simply a matter of hitting a button with your right thumb, although as with most 4wd systems, it’s best not to do so under power. Kenda Pathfinder tires mounted on very durable steel wheels are found all the way around, and the 2008 Kymco MXU 500 has a healthy 10.2” of ground clearance. If you hit anything bigger, you should have gone around!

Since the 2008 Kymco MXU 500 is designed for venturing deep in to the woods, it also holds almost five gallons of fuel, and you can carry enough hunting, fishing, and camping gear to last more than a week on the steel front and rear racks. The front racks also incorporate a solid feeling bumper that comes down and protects the front end. If that still doesn’t get the job done, you can pull a trailer because the 2008 Kymco MXU 500 comes with a sturdy hitch at the rear. When it comes time to get everything stopped, discs brakes are found at both ends, and the single rear disc is fixed to the solid axle, yet curiously enough, there are two calipers mounted atop it. It was game time for the rookie and we needed to see what it could do!

Climbing aboard the 2008 Kymco MXU 500 you will find pretty much everything in the usual places. At your left thumb you can find the kill switch, lighting controls, starter, and curiously enough, a passing button! The 2008 Kymco MXU 500 has a little trigger labeled “passing” on the front of the left hand switch pod. The reason being, since the unit is also sold in Europe, where quads are more often than not road legal, it is mandatory to have a “passing” switch that activates the headlights to alert other drivers you’re coming by like a Ferrari on the Autobahn, although we doubt you’ll ever need it in the woods, and it’s unlikely you’ll pass many cars on the highway. In the centre of the stem is an easy to read digital display that shows fuel level, 4WD/2WD status, trip and mileage info, and a few other things that are usually better observed while stopped. Just below the digital readout are the gear selection lights, and the key. To the left of the tank is the actual gear selection lever, and although it is easy to understand and works well, we wish the bodywork was sculpted differently to alleviate the current housing from digging into taller riders left knee when moving around on the quad. Firing up the 2008 Kymco MXU 500 is as easy as turning on the key, using the choke mounted on the right handlebar if needed, and hitting the left hand thumb button. Our 2008 Kymco MXU 500 always purred to life very easily, even when we did need the choke. We were off! We took the 2008 Kymco MXU 500 into the woods, through trails, down gravel roads, in the dunes, over rocks, and covered about every type of terrain most ATV riders will ever see. We even drove it through deep water, and regardless of the rider or terrain, it always had good throttle response and power comparable to any player in its league. It would do whatever we asked, and could go pretty much anywhere we wanted to take it.

There are a lot of things we like about the 2008 Kymco MXU 500, and a big one is ease of maintenance. An important factor in keeping any engine alive is regular air filter and oil changes, and the air filter is right under the seat and is super easy to get to. On the left side of the engine is a sight glass where you can get a quick check of the oil level, and just ahead of that is the oil fill hole. We wish the oil fill hole was angled more towards the outside of the engine for easier filling, but at least there are no panels in the way. Underneath the bodywork, we found the frame and chassis components to be sturdy and well made, and the plastic bodywork seems to hold up to abuse, and fits extremely well.

We always want to tell you everything however, and the 2008 Kymco MXU 500 is still a rookie, which often means there are a few things we would like to see changed. A huge thing for us on any utility quad is storage space, and here the 2008 Kymco MXU 500 features a compartment too small for even a bottle of water. It needs more than an ashtray for the tools, tie downs, bottles of water, etc that we like to bring along, and this will have to be improved on for most utility buyers. Mechanically it seems quite good in most respects, but it does need a tighter turning radius, and we are going to remove the front wheel on our test unit and determine why it does not turn tighter. In fact, since we’re “hands-on” type of guys, we intend to make a few changes to our 2008 Kymco MXU 500 front-end geometry and do a little testing ourselves. A third item, and one that we will change immediately, is the handlebars. The current bars reach so far back it reminds us of a 1920’s vintage bicycle, and the problem with that is it takes away all arm leverage. That’s bad when winding through the trees.  With a few rather simple changes, the entire package would improve.

Scouting Report
While the 2008 Kymco MXU 500 may be in its rookie season, the foundation is in place for a long and successful career. It’s true there is much to be learned, parts of the game to work on and improve, and endless development time to come, but the fundamentals are all in place to make that happen. As a manufacturer, KYMCO is a rather young team, but that can be an advantage, and there is little doubt they will quickly learn the game, refine their program, and improve each day. We expect them to be a player to contend with.