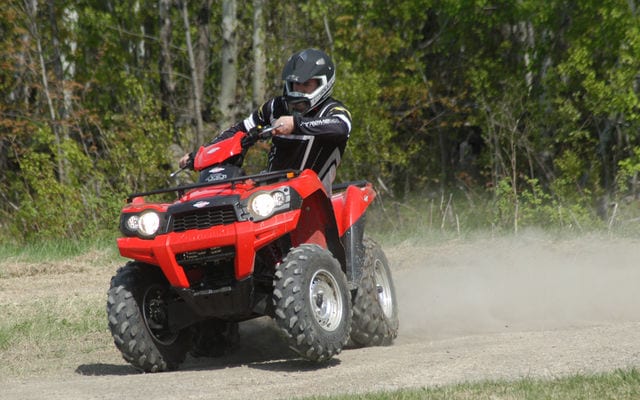 Today’s ATV customer is very lucky.  Less than a decade ago, the ATV lineup of each manufacturer was a slim field to pick from, and the technology was often times something left over from the 70’s.  Thankfully, those days are gone, and today there are dozens of extremely good ATVs on the market, and the technology found on many ATV models often times exceeds that of their motorcycle cousins.  With so many very good ATVs to choose from however, sometimes even we overlook a model that deserves a closer look, and a little more trail time.  Recently, we had the chance to ride the new Kawasaki Brute Force 750 4x4i for the first time, and with the changes Kawasaki made to their flagship model, it feels like an entirely new machine.  It’s not that the previous model year Brute Force was lacking, but this takes the concept to a whole new level.

In the past few years, most manufacturers began naming their different classes of ATVs. Some went for birds, bears, royalty, outdoorsman, and just about anything else the marketing crew could dream up, but none are more aptly named than the Kawasaki Brute Force lineup. When it comes to power down low, they’ve got it, and Kawasaki wanted everyone to know it. Several years in the lineup can make any model look dated. However, like another technology, they must be updated or they will simply fall by the wayside. It was time for a change, and Kawasaki did not disappoint.

The chassis of the 2008 Kawasaki Brute Force 750 4x4i is a traditional tubular steel design, with dual A-arms at the front, and independent rear suspension (I.R.S.) at the rear via another set of A-arms. This time with a sway bar attached to help control any body roll. Dual rate springs are found at each end, with both sets of shocks offering limited adjustability, and suspension travel is listed at 6.7 inches at the front, and 7.9 inches at the rear. Disc brakes are also found at both ends of the Brute Force, but the rear braking system is encased in the differential, and it has been our experience that this type of setup is virtually indestructible. A secondary benefit of an enclosed rear brake system is centralized mass in the chassis, and there are no rotors, hubs, pads or other components to drag through the mud and inhibit ground clearance. Don’t expect to use a lot of brake unless you’re really hauling however, since Kawasaki’s highly effective Engine Brake Control gives an assist in most situations, and we like how it helps get you slowed down, without being overly abrupt when you quickly back off the throttle.

Kawasaki realized most riders will use their 2008 Kawasaki Brute Force 750 4x4i for both work and play, and with the power put out by the V-twin engine, the Brute Force won’t shy away from any work duties. They even installed a plastic conduit to make winch installation easier. At the rear, it comes with a tow hitch rated for a pulling weight of 1250 pounds which should cover most pull behind implements. We strap a lot of stuff to the racks of most utility quads, and the Kawasaki has you covered with racks that have been reworked for 2008. One of the most important features for us is onboard storage, and the new Brute Force now has an additional waterproof storage box on the left front fender as well.

Kawasaki spent a great deal of time dialing in the ride of the Brute Force, trying to improve it’s seat of the pants feel, and nothing was overlooked, including the seat itself! The seat material was changed, and the new seat is designed to be soft and comfortable to sit on, but as the rider sinks into it over bumps, it firms up to offer support and prevent bottoming. It’s amazingly comfortable! Another one of the most noticeable improvements to the Brute Force is the wheels. The 12 inch wheels get a new rolled lip design for better strength, and they also look outstanding with a highly polished finish, and they give the machine just under 10 inches of ground clearance. At the front of the Brute Force, a new front bumper and bodywork featuring new four bulb headlights and better handholds for those few times you may need to man-up and maneuver the front end into the corner of a trailer or the garage. Enough about the bodywork, it’s now time to take a look at the motor!

At the heart of the2008 Kawasaki Brute Force 750 4x4i is a 749cc four stroke 90 degree V-Twin engine. While the 4 valves per cylinder, V-twin configuration has been a mainstay of the Brute Force line since the beginning, one of the best new features for 2008 is the switch from a traditional carburetor to electronic fuel injection. The advantages of EFI are better starting in all weather conditions, improved mileage, a cleaner burn, no jetting for elevation changes, and crisp power delivery. We’re sold on EFI, and it’s a huge benefit for riders everywhere. We especially like that the Kawasaki design team chose to locate the pump inside the tank, which helps keep it cool, and also protects it safely, out of harm’s way. Because the Brute Force is a V-twin, the Electro-fusion plated cylinders are fed by a pair of 36 mm throttle bodies, and to keep throttle pull light and easy on the thumb, the throttle assembly and spring rates were also reworked. Feeding the system is a foam type filter located where a fuel tank is usually found, the advantage to the air intake system being a clean air source with a virtually unobstructed air intake tract and easy filter access. More importantly, for handling however, having the five gallon fuel tank located beneath the seat, drastically lowers the overall center of gravity, and a larger volume tank can be used. Mated to the engine is a CVT transmission featuring high, low, reverse, and neutral, and all a rider needs to do is select a gear by grabbing the small lever just ahead of the right knee, and snick it into gear!  To engage four wheel drive, a thumb activated rocker switch on the right handle bar gets all wheels turning, and there is even a little message on the center mounted digital display indicating 4wd. When things really get sticky, sloppy, or maximum traction is needed, the Kawasaki does also have a front differential lock system, and grabbing a small lever on the left hand bar engages it to deliver torque equally to both front wheels, allowing the Brute Force to demonstrate the ability it was named after. One thing Kawasaki is extremely proud of is the Cardan joints used in the drive system to each wheel. Unlike universal joints, which can actually inhibit suspension action, cardan joints have the ability to turn a shaft on its long axis (like a universal joint), but allow for alignment (in this case, suspension) geometry changes. The result is a smaller diameter shaft can be used for less overall weight, and less vibration. It’s time to ride!

Climbing aboard the 2008 Kawasaki Brute Force 750 4x4i feels completely comfortable, and all controls are easy to access. The digital display is easy to read, and offers essential information such as speed, fuel level, trip distance, etc, and just above the display are several warning lights for any critical concerns. We like the short shift lever, as it always worked extremely well for us, with positive engagement in every gear, and it was easy to shift from forward to reverse, which is important when working with some accessories such as a snow blade. Getting underway is no problem, and the Brute Force fires up instantly thanks to the EFI, and once started, the engine has a sound like no other. The V-twin engine emits a throaty growl that is well contained at low RPMs, but when you get on the throttle, it give a warning bark that won’t be mistaken for any other ATV, and it’s fun to watch heads turn as you pass by.

One of the first things you will notice on the 2008 Kawasaki Brute Force 750 4x4i, is that steering is very light. In fact, it’s almost as easy to steer as Yamaha’s power steering equipped Grizzly. As a test, we did quite a bit of riding in 4wd mode, and the required steering input and feedback from the wheels was a barely noticeable difference over 2wd, and it made the Brute Force easy to ride all day with no arm fatigue.  We spent most of the day winding between tight trees, slalom style, and the Brute Force handled it very well. Power out of the corners is excellent, and reminds us very much of a big bore sport ATV, with incredible torque that is able to lift the front wheels at will. In fact, the only other utility ATV that could hold a candle to it for instant torque is the Can-Am 800. One feature that really makes the 2008 an entirely different machine over previous models is the overall size. Seat height was actually reduced just over a half inch, and it is also a half inch narrower than past models, and it’s definitely a difference you can feel. With it’s lower center of gravity, light steering, and explosive power, the Brute Force 750 4×4 winds through the trees easily. It’s so fun to ride! There are a couple of things about the Brute Force we think could be improved however, the first one being foot peg position.

The 2008 Kawasaki Brute Force 750 4x4i received updated foot pegs, but we wish they were further back. When sitting on the quad, placing the arch of your foot over the peg sets, your feet are placed too far forward, and when standing for a rough section, they would place your weight too far forward as well. We would like to see the pegs moved back, and be a little taller to anchor our feet better. A second thing we noticed is that the Brute Force has a tendency for the rear end to begin swapping when being pushed hard through the whoops. At most speeds, it can handle the whoops fine, but when being ridden aggressively, which this motor invites, it can get a little scary as the back end tries to pass the front. In fact, it’s almost hard to think of the Brute Force 750 4x4i as strictly a utility quad, because it has the power to run with sport quads, and the handling to be ridden aggressively, all day.

The Kawasaki’s new 2008 Kawasaki Brute Force 750 4x4i is impressive. The power comes on like a big bore sport quad; EFI has the motor purring along perfectly, and the slightly narrower and shorter overall height, definitely make it feel a little more nimble when carving around the trees. It’s a utility quad with the ability to work like a government mule all day, and as long as you’re careful in the whoops, to be ridden like a sport quad with your buddies on the weekend. We like it,…We like it a lot!