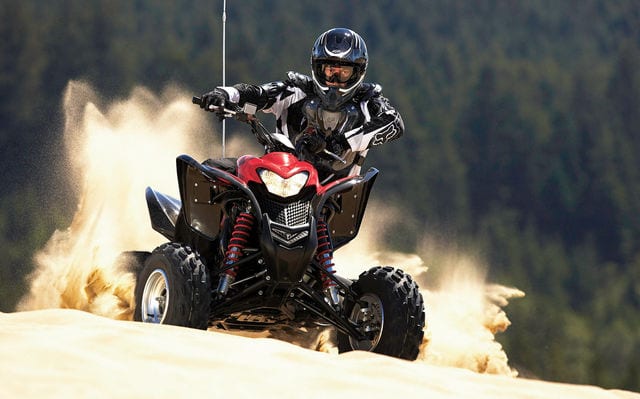 Before anyone ever ventures near the 2008 Honda TRX 700XX, the first thing they notice, and often comment on, is the looks. We’re just going to say it: We heard from more than one rider that thinks the front end bodywork on the 2008 Honda TRX 700XX is ugly! That being said, our only concern is how it works, and if it came painted pink with daisies, we would still evaluate it based solely on performance. The bottom line is the bodywork lives up to Honda’s legendary reputation for attention to details. At high speeds, front fenders trap air which robs power, and can cause lift in the front end. The bodywork has two small cuts that allow air passage and still keeps the rider clean. The rear is more traditional in styling and features, maybe the longest seat in the history of sport ATVs. It continues onto the fuel tank and wraps around the sides of it to cushion the knees. Underneath the bodywork is where the magic is, and it’s our engineering background that makes us look there before we ever fire any new machine up. The 2008 Honda TRX 700XX is a whole new mystery!

Framework
There have been so few sport IRS models released that it is virtually unexplored territory. Although an IRS system offers better performance under some conditions, designing it to do so, is comp­licated. In order to work properly, the IRS system would need the long­est possible A-Arms, to reduce camber change throughout the stroke, long axles and the center mounted chain system. Besides the reduced camber change, another welcome benefit of the longer ­axles is reduced wear on the CV joints, as the angular misalignment is decreased throughout the suspension stroke. Sound simple?

The chassis is steel in majority, although many of the components are either forged or cast aluminum. In front, the a arms, steering system, and brakes are sim­ilar to those of a TRX 450R. Both the upper and lower front A-Arms are made of steel. At the rear, only the upper arm is steel while the bottom is forged alu­minum. The rear wheel hubs are also steel. Mounted to the rear hubs are 11 inch aluminum wheels fitted with 22x9R-11 Dunlop radials. A large ­diameter rear wheel was required in order to locate the upright as outboard as possible, thereby lengthening the dual A-arms. Because any IRS system would have a natural tendency to “roll” more than a straight axle quad, a rear sway bar is added to the lower A-arms in the back. The system offers 9.3 inches of wheel travel. At both ends of the quad, the suspension is dampened by adjustable shock absorbers. On the front end, that means 10.5 inches of travel and dual springs with a screw type adjusting system. The main spring provides a smoother ride on big hits, while a smaller spring actually helps set ride height, and works to keep the wheels on the ground. This keeps you in control when the trails get really rough. It’s a difference that you can feel. Near the centerline of the chassis, is the rear disc brake, which is exactly the same distance (33mm) to the right of the centerline of the chassis as the rear sprocket is to the left.

A whole new engine Although the engine on the 2008 Honda TRX 700XX looks deceivingly like the motor from the XR 650 dirt bike, it’s not. Because of their overall weight and a huge contact patch with the ground, ATVs’ ­require vastly more torque and slapping and a dirt bike motor doesn’t cut it, especially with Honda’s extremely high stand­ard for reliability. Honda’s answer for the XX is a 686cc dry-sump, liquid-cooled single overhead cam (SOHC) four-valve engine, with a bore and stroke of 102mm x 84mm. The new engine is also count­erbalanced to reduce vibrat­ion and was designed for a low center of gravity, by reducing overall height. One of the feat­ures we like best is the fuel injection system. The 700XX feat­ures a Keihin Engine Control Module, vaporizing fuel through a 44mm ­throttle body, and on the ­opposite side of the piston is a single stainless tube exhaust. One trick Honda used to red­uce overall height of the engine was to locate the pool of oil outside the ­cases, which reduced required case volume and size, but also aids in cooling both the oil and the engine. The only pot­ential drawback to this type of “dry sump” engine is that the oil can become so aerated by the pump and engine comp­onents churning away, that it no longer flows, or protects well.

To alleviate that problem, a clever tubing bend and internal screen modulate the flow of oil between the engine and the aluminum external reservoir. Inside the combustion chamber is an enorm­ous forged piston pounding away at a 10:1 ratio, with a center mounted spark plug. To get all that power to the rear end, the XX features a five speed gearbox (with reverse) and chain drive system, but the similarity to other sport ATVs stops there. Honda realized that centered mass is much easier to control and maneuver, but the problem with an IRS rear end is that it was extremely difficult to get the chain and rear drive system to align properly. Ideally, the chain would run down the center of the quad, but on most sport ATVs, the engine output shaft is located far to the outside. The solution was to install another set of gears, transferring power to a front drive sprocket, located back towards the center of the machine. It wasn’t real­ly an easy solution, but it is excellent for centralizing mass, and for improving rear end geometry. It looks a little like an extra transmission set where the countershaft sprocket usually resides. It works!

Ride review
The 2008 Honda TRX 700XX is designed to be ridden all day, and to be ridden aggressively. As with most Honda’s, the ergonomics are excellent and it is comfortable to sit on. Seating position is excellent, your feet are well placed underneath you and the controls are exactly where you need them. Dare we say, it’s got that typical Honda feel. We began looking for the key and the start button!

One would expect plenty of low end torque from a 700cc engine and the Honda has lots. It’s got plenty of ­power to lift the front end for attacking the whoops, but once we tried it a couple times, we were quick to disc­over we didn’t need to. It was easier and faster to simply stay on the gas and let the suspension work underneath as you charged through, which is completely different than on most sport ATVs where it’s often much better to loft the front end, pin the throttle, and pray for divine intervention. One of the greatest features about the suspension is that it holds its line very well, with no side to side swapping, or doing anything ­other than charging ahead as fast as pos­sible. For long whoop sections, it’s great, and it doesn’t seem to care how fast you are going. The 700XX can handle it. As long as the rider remains in a neutral riding position, it will hold its line. A big factor in the Honda holding its line is that the rear wheels are actually toed in slightly to make it track better. Since the XX has no rear swing arm and axle to drag along, ground clearance is excellent as well, and most rocks and other obstacles can safely slip underneath. It isn’t afraid of any rough stuff! In the air, the Honda flies quite well. Most landings were hand­led quite well also, but on bigger jumps we could feel the extra weight. Steep, long hill climbs offered a test of power, and as expected the Honda ­delivered enough to conquer anything we tried. But be prepared to downshift.

There are a lot of great ATVs on the market and the Honda name is on the side of many of them. No machine is ever perfect from the factory, however, and there are a few things we wanted you to know about the 2008 Honda TRX 700XX as well. The first thing that could be a problem for riders winding through tight trees all day is that it is very tall in first gear. Sometimes a rider can slip the clutch a little to slow down, but this doesn’t always work on the 2008 Honda TRX 700XX. The reason slipping the clutch is not the answer is that the clutch is ­either engaged, or disengaged, with no middle ground, and more than once we stalled it trying to get the proper clutch feel. It’s touchy! No doubt the 700XX needs an aggressive, tight clutch pack to harness the low end torque, but it almost certainly takes away from the ability to slip it with a finger or two, although the actual clutch pull is quite easy. The second thing we not­iced about the 2008 Honda TRX 700XX is that although it has great power down low, when it gets to the mid range, power delivery begins to fall off and you can push the throttle to the stops. Don’t get us wrong, it’s still fast, but takes a little longer getting to top speed than other quads with the same displacement. The third thing we noticed is though it is fantastic in a straight line, when it came time to slide through a corner, just like other IRS quads, it wants to push in the corners. It takes a lot more to break the rear end free to power slide, and it prefers to be driven through corners.

Ride Away
We have to applaud Honda for taking a chance on an entirely new model like the 2008 Honda TRX 700XX. With the 2008 Honda TRX 700XX they’ve released new technology, a new platform, a larger motor, and a suspension system that only one company had ever tried before. Honda has done very well with this new creation and the ­result is a quad that can be ridden pract­ically anywhere, all day, which is just what we intend to do.