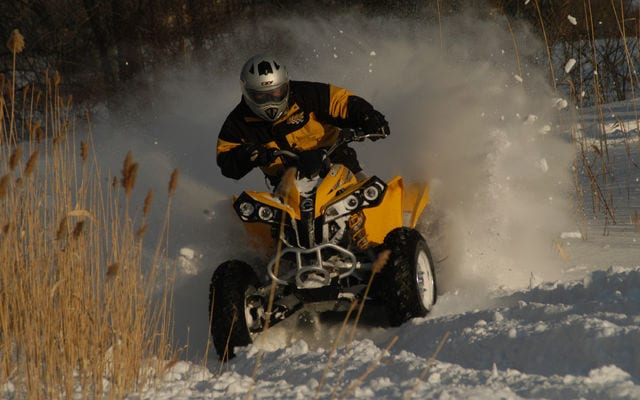 The first time you see this machine, you will know what it has to offer. Extremely aggressive looking, the new 2008 Can-Am Renegade 800’s stealthy design lines are like nothing else. It screams out performance with a look that well represents what this machine is all about. For those hungry for raw power at the ready, in any given situation, it won’t disappoint. In this Renegade’s belly lies the same motor as the Outlander. In fact the Renegade also has a lot of the same features, like its beam chassis, gas shock absorbers, adjustable handlebar, a complete numerical meter with driving mode and speed indicators, and headlights of an astonishing quality. The list is long and for all the precise details, you can refer to the manufacturer’s website.

Start-up is quick and efficient; the injection makes you forget troubles with a choke and differences in altitude. My only disappointment is that the battery would drain if I stopped and restarted too often. When shut down, even with the key out, the Renegade’s tail light and instrumentation stays lit for a long time. I don’t know why. I found the scrolling message gadget also a bit ridiculous. The first emitted sounds give a hint at the motor’s potential power. With a different muffler than the Outlander, the big twin-cylinder has a much more serious and aggressive sound. The growl is sweet but the strongest I’ve heard on any quad so far.

Staying alert at all times is imperative while driving this monster. Managing all this power can be tricky at times; thumbing it lightly is a must in tight trails. Powerful at low or high revolutions, the renegade’s powerplant delivers its power smoothly, but it’s still tricky.
Our very first tries had us laughing at this ridiculous amount of power and grip. Climbing onto a huge snow bank, the monster cut it down to half its size, throwing up snow like four snow blowers working in tandem. The huge ITP tires are amazingly efficient and had the quad ploughing on easily in knee deep snow. It felt so invincible that we managed to get stuck despite, realizing only after the fact that there was at least four feet of snow at that spot.  Luckily we were two very able huge boys.  A winch should be added for peace of mind. This quad’s capabilities will rarely let you down, but once they do, the 800 lbs plus beast is impossible to move. It’s tough to push, even on flat ground.

Rider position on the machine is very pleasant; it seems to be able to comfortably fit all sized riders. Only experienced ones should straddle this one though. For it is a beast in waiting for the toughest terrain out there. The tiltable handlebars are very practical in that sense.

All the controls fall precisely in place for easy operation. My fingers felt comfortable reaching any button. The most practical would be the reverse gear rev limiter override, but should be used carefully. Too hard of a thumb press and you could end up kissing the front bumper in a hurry. Switching from two to four wheel drive is done quickly at the flick of a switch. I went ahead against recommendations and tried shifting it while on the move but off the gas and there was no detectable noise or mechanical hesitation. The “Visco-lock” delivered smooth and intelligent traction to the wheels as needed but did feel weird on a few occasions, creating a noise when carving hard in the thick and heavy wet snow as the outside rear wheel seemed to lose traction momentarily. But this isn’t anything any good responsible rider would notice, as it only happened when we were trying to slide the back for a cool photo, in way too much snow.

The right side gear selector works well and I got the hang of operating it quickly enough.  Indentations in the body do a good job of avoiding having to search or wonder if the right position is selected. After only a few rides, I didn’t need to look at it to know what position it was in.

Despite the tough and demanding snow conditions we were in, riding it in two wheel drive was possible only where quads had already made tracks. Driving it in 4WD was just way more fun though. The incredible amount of power available created the illusion that this quad was very lightweight, standing up on the pegs and letting the machine dance over bumps was just as fun and easy has on a 450 race quad.

Protection of the rider could be better: debris is projected by the nose wheels right up in your face at times and snow would quickly fill up the foot rests. So much so that it would block the rear brake pedal from operation and I had to stop to clean them out many times. The rear brake pedal was a bit high for my taste; I got my boot sole stuck on the side of it instead of quickly having direct access to it a few times.  The plastics are less effective than most 4WD’s in that sense but that’s the price to pay to have it look so cool. The other option would have been huge squared up fenders and this would have clearly killed the look.

This monstrous machine is balanced extremely well for its size. On the dry ground, pushing the throttle to the max from a stand still won’t have you flipping over on your back but up a bit in revs the beast will easily climb up into a wheelie if that’s what you want. It’s smooth enough that it shouldn’t catch you off guard though. The front will climb up only if you help it with a pull on the bar.

Without a doubt, this is not a machine to put in the hands of a beginner. There’s even a warning sticker on the gas tank to warn rookie operators and it says among other things that no one under the age of 16 should drive it. But for those who have the necessary experience, the Renegade proves very easy to take in hand, and the power, despite being abundant, is very easily manageable. Who would have thought that such big bore 4WD quads could become so sporty?

For more information on the above mentioned models, please visit the Can-Am Off-Road Website