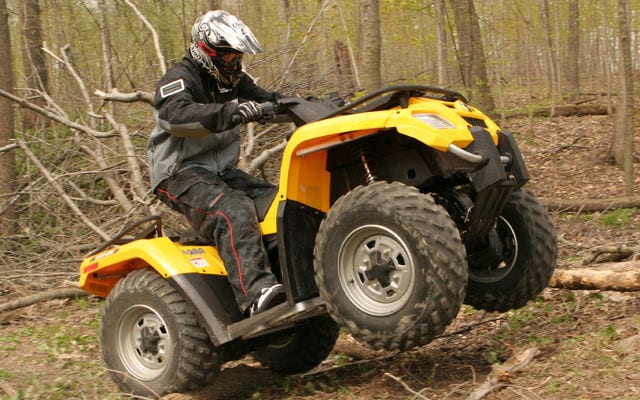 Can-Am has always pushed the performance of their ATVs. They’ve raised the bar in practically every category. At the head of the line-up is the Renegade 800, without a doubt one of the most awesome rides we have ever been on. New or less experienced riders will quickly find it handful, capable of taking them far beyond their riding abilities. There are many models in the Can-Am line-up however, and for the majority of riders, their new 2008 Can-Am Outlander 400 H.O EFI, fits them perfectly. We decided to take this new Outlander on a few adventures of our own.

A New Outlander!
Can-Am decided to make major changes to the 2008 Can-Am Outlander 400 H.O. Since the H.O. (High Output) engines worked well in other models in the line-up, the reliable Outlander would also receive it. A big part of that package is the addition of Electronic Fuel Injection, meaning excellent starting at any temperature or elevation, better fuel efficiency, and good power delivery.

We are glad to see EFI on most new ATVs. Even if it requires a fuel pump and added complexity, in our experience they have been extremely reliable, and the benefits of a clean running engine with better starting are indisputable. The yellow and black factory colors look hot, and the yellow doesn’t show scratches, but it’s the parts beneath the bodywork that count. Just like most Can-Am ATVs, the 2008 Can-Am Outlander 400 H.O EFI is built with a massive main structural tube down the center of the ATV (which Can-Am calls SST for Surrounding Spar Technology) and the other components are built off of it. Also unique to the Can-Am line-up, is an independent rear suspension system, known as TTI, which stands for Trailing Torsional Independent suspension, with trailing arms offering eight inches of travel. The advantage of this system is that the rear suspension has almost no camber change throughout the shock stroke.

Compared to most IRS systems that feature dual A-arms and all the related hardware, the TTI system is quite simple and, other than the two beefy-looking trailing arms and a couple of drive axles, it has very few moving parts. It’s both a “clean” design and smooth on the trail, and the longer the trail ride, the better. At the front end are a set of lower A-arms and McPherson struts offering seven inches of travel. The brakes are wisely tucked up close to the centerline of the chassis, not only centering the mass and helping improve handling, but keeping them well protected from debris. Can-Am ATVs are slightly larger than most of their competitors, regardless of whatever class they are in, and taller riders appreciate the extra room. The 2008 Can-Am Outlander 400 H.O. is actually very comfortable to sit on and all the controls are easy to access and understand. Every rider liked the seat of the 400 H.O., which is plush and perfect for long rides. The handlebar bend is also quite comfortable.

One great feature on the new 2008 Can-Am Outlander 400 H.O. EFI is the center-mounted digital display gauge, which is very easy to read even when flying down the trail. We like it! By toggling through the gauge functions, you can display speed, engine rpm, an odometer, trip meter, diagnostic center, gear position, engine hour meter, 4×4 engagement, temperature and engine lights, fuel gauge, high/low beam for the lights and an auto shut-off after 15 minutes. It even says “Hi” when you first turn on the key! There’s no such thing as too much information when it comes to vehicle performance, and luckily the Outlander makes it easy to follow. We also like the storage box found at the rear which easily holds a pack of tools, several water bottles, a tow rope, and a few other items. After bouncing over rocks and logs for a few days, we found the new steel wheels hold up well, as does the bodywork, which is flexible enough to take abuse, but still looks good.

Northern Trail Ride
A weekend in the woods always does us good, and on this trip we would be riding the 2008 Can-Am Outlander 400 H.O. on ORV trails, logging roads, and tight two track trail. Along the way we would find mud, logs, hills, rocks and water to conquer, and we couldn’t wait to get started. Starting the 2008 Can-Am Outlander 400 H.O. brings out a healthy purr from the motor, and the engine runs clean and crisp right away, thanks to the EFI system. The exhaust level is about the same as most other mid-sized ATVs, and it’s easy enough to slip the right hand lever out of Park or Neutral and into High, Low or Reverse, and we are off. The Outlander 400 feels predictable on the trail and extremely stable when crossing rough sections, even when all four wheels were taking a pounding. We played with the tire pressure for the terrain we were on, and found that 5 pounds in the front works very well with either 4 or 5 in the rear. After we dialed in the tire pressure, it would hold its line very well. Shock dampening is very good for aggressive trail riding, and we believe the 2008 Can-Am Outlander 400 H.O. EFI is at the top of its class in this area. When riding across the side of steep hills, we could feel the -extra size of the Outlander as compared to other ATVs in its class, but with a little planning, it can tackle most terrain with ease. Handling through the trees was very precise, adding an extra pound or two of front tire pressure also helped control tire roll. It was only when approaching the limits of the steering range that we began to feel a slight over-steer. Overall though, the Outlander 400 doesn’t do anything crazy and handling is very predictable and controlled. We’ve always been the in the crowd that feels there is no such thing as too much power, but in reality even mid-sized machines like the 2008 Can-Am Outlander 400 H.O. offers enough power to go practically anywhere, and are still very controllable and less intimidating, especially for new riders.

The new 2008 Can-Am Outlander 400 H.O. EFI actually has more power than previous models, and more than most other units in its class, but the powerband is extremely linear, which can be deceiving. It doesn’t feel like its going fast or accelerating quickly, even though it actually is. We would like to try changing the clutch to engage at a slightly higher rpm for a little extra punch, which would give the rider that seat-of-the-pants feeling of -power on demand. In stock form, the 2008 Can-Am Outlander 400 H.O. won’t shy away from any hard work, and for most riders its forgiving nature is probably excellent. We also wanted to test the engine in 4wd mode, and it didn’t take us long to find a spot on the trail, where we could put it to use. When we engaged the Visco-Lok front end, it performed flawlessly, with no -noticeable drag on the engine.

4WD Time
The Can-Am 4WD system is called “Visco-Lok”. It detects differences in front wheel speed, and sends more power to the wheel with better traction, and it does it all on its own. We’ve been in the mud with other systems that claim to be 4wd, with one wheel stuck in the mud and the other uselessly spinning wildly.With the Visco-Lok that can’t happen, and we’ve -taken the Can-Am into heavy mud and even water, and it never let us down.However, we did find one problem when taking the Outlander in deep water. The CVT clutch housing does a good job of protecting the primary and secondary clutch, but the air breather hoses have a routing that funnels water down inside the cover, so the belt gets wet, and you’re done riding until you dry it out. In the owners manual it describes a method to drain the case, but we found that to be inadequate, and our solution was far more effective. We simply drilled a hole in the bottom of the cover between the two clutches and installed a tire valve stem with no actual valve inside. Simply screw the cap on and off, as needed, so that anytime you get a wet belt, you can quickly drain the case and then be on your way. Overall though, the drive system worked quite well, and both the front and rear tires do a great job of providing a smooth ride with good traction.

Maintenance
One thing we consider when evaluating any quad, is ease of normal maintenance. Clean oil and air filters are the most important factors in your quads reliability, and as long as you have fresh oil and a clean filter, your engine will almost last forever. We check the oil before every ride, and clean the air filter often, and it is extremely important that both are easy to get to. Luckily, the Can-Am engineering crew designed each for easy access without tools. On the 2008 Can-Am Outlander 400 H.O., there is a dipstick on the right hand side of the engine, along with an oil filter that is behind a small cover near the front of the motor. Also, on the right side, is the air intake system, and by snapping open a couple fasteners, you will find a paper filter with a foam cover. We would prefer a foam filter that can be washed instead of the paper, but we usually use the paper filter until it’s time to replace it, and then we’ll swap it out for a -quality dual density foam aftermarket filter.

At the front of the Outlander there is a storage tray, and inside you will also find easy access for a coolant check and critical electrical components.

Trail Notes
The 2008 Can-Am Outlander 400 H.O. EFI has proven to be a very capable explorer. We’ve taken it on many long trail rides into the deep woods, mud, deep water, across an infinite number of rocks and logs, and into the sand, and it conquered every obstacle. We’ve even used it to pull a mower. The only problem we encountered was when the plastic cover on the outboard end of the starter cracked, presumably by being over-tightened at the factory. Otherwise, it has never let us down. We found that riders of every size were comfortable on the 2008 Can-Am Outlander 400 H.O. EFI. Because of its predictability and plush ride, many will enjoy it. It runs well and makes all day trail rides a breeze. It’s truly a winner!

For more information on the above mentioned models, please visit the Can-Am Off-Road Website