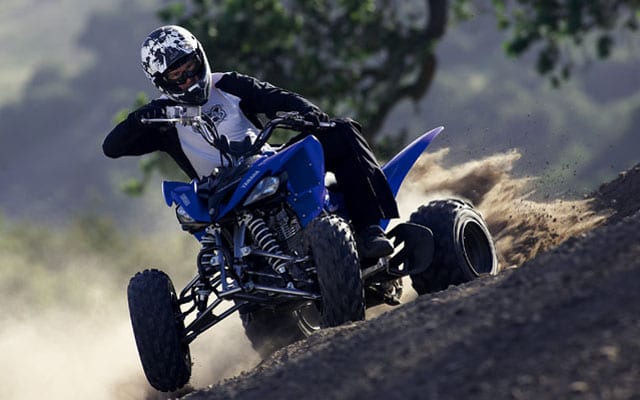 Yamaha had a problem. They sold the nimble Blaster for almost two decades, which is longer than most new Blaster owners have been alive, and the unit was still selling well, yet it was scheduled to be discontinued. Environmental regulations had overtaken the Blaster and its faster brother, the Banshee, and their two-stroke power plants were not going to meet emissions standards. To make matters worse, the public had become enamoured with four-stroke power, and the Blasters’ looks had become a little dated. Despite those facts, the Blaster was still an ATV new riders could learn the basics of sport-riding on without getting intimidated. It was as reliable as a good horse, yet it was being put out to pasture. That left a big hole in the Yamaha ATV lineup, and in the company’s bottom line. It was time for a new model and it would take something special to fit into the Yamaha sport family.

At the introduction of the Raptor 700, we had dinner with several members of the Yamaha engineering staff, and they asked us many questions about what features a new, smaller sport quad should offer. We were asked about size, weight, drive options, shifting and clutching, how the motor should be cooled, etc. As that time we guessed that they were working on a replacement for the Blaster, but were rather early in the development process. When the sheets were pulled off the new ATV, our suspicions were confirmed. Sometimes when they’re really doing something ground-breaking, Yamaha simply can’t wait to spread the good news around, and they’ll give us an early preview of the new model. The new 2007 Yamaha Raptor 250 is just such a model.

The New Girl
When the Raptor 700 was introduced, more than a few misguided individuals were posting all over the Internet that it was only a pumped up 660. Go figure that something posted on the net is wrong! Make no mistake though, the new 2007 Yamaha Raptor 250 is no Blaster with a four-stroke motor stuck in it. It’s an all new ATV from the ground up and one of the best looking ones we’ve ever seen. The styling team really got it right this time! It takes more than a pretty face to keep our attention how ever, and we went right for the details.

The 2007 Yamaha Raptor 250 styling is awesome. It’s racy, strong, stylish, and dare we say, sexy. It’s the perfect combination of subtle curves, and determination. We love the little air intake ducts in the front cowling, and there is no doubt this quad is definitely a sporty member of the family and it fits in perfectly with the Raptor 700 and the YFZ 450. Sitting on the 2007 Yamaha Raptor 250 is very comfortable, and everything feels right at home, even though it’s a little smaller than  we’re used to. It’s perfect for who it was designed for however. In their marketing research, Yamaha found that other than their own Blaster, there wasn’t really a true sport machine for newer sport riders, younger riders, or riders of a smaller stature. Yamaha also found that a lot of women were riding bikes in this category, and as a result, the engineering crew was given the task of designing a no compromises sport ATV in a slightly smaller size, and as light as possible. No problem!

Power Plant
Building a new engine from the cases up is a very expensive project, and usually requires several years of development before all of the problems are worked out. Yamaha is a company that always tries to minimize both the development time and any future problems by utilizing engine technology they already have on hand. In the case of the 2007 Yamaha Raptor 250, even though the engine is new to North America, it has been used in one of their European motorcycles for many years in a dual sport bike. Since it was from a bike that was used for off-road riding, it has plenty of low-end torque, which is exactly what an ATV needs and that made the transition to an ATV a natural one. The engine features a 249cc, two-valve, four-stroke design with electric start and air-cooling. To keep the weight down, the cylinder is all aluminum, with a ceramic composite-plated cylinder for better heat dissipation and longevity, and the engine also features a wet sump design with a small oil cooler just under the front nose piece, and ahead of the steering stem. A 29 mm Mikuni carburetor feeds the engine, and the filter design is similar to the dirt bike and can be removed without tools.

To get things rolling, the engine is mated to a five-speed gearbox that requires a rider to use a clutch and shift, and a traditional chain drive system. We like to see a traditional clutch and chain drive, not only because it’s sporty, but because we’ve always believed a rider should learn how to do a little maintenance. The 2007 Yamaha Raptor 250 is a perfect learning ground for both mechanical and riding skills. Chain adjustment is super easy because of the eccentric chain adjustment, just like on the YFZ 450, and the Raptor 700! The drive system and clutch are exactly as they should be on a true sport quad, and not like a warmed over, shaft-drive, wanna-be sport bike like almost every other model in its class. Great job Yamaha! Thank you for not trying to market a utility bike as a sport unit!

Nuts & Bolts
One of the goals of the 2007 Yamaha Raptor 250 project was to keep the weight down, and as a result, the engineering team went with aluminum parts wherever they could. The chassis remains a high tensile steel, but in reality, to get the same strength out of any aluminum chassis, they would weigh about the same. The wheels, steering uprights and several other components are aluminum however, and specially designed Dunlop tires get the power to the ground. As it comes from the factory, the 2007 Yamaha Raptor 250 weighs in at 313 pounds, which is actually 13 pounds lighter than the Blaster, and an enormous 47 pounds lighter than its closest portly competitor in the 250 category, the Honda 250EX. In fact, the 2007 Yamaha Raptor 250 is the lightest sport ATV ever built! Yamaha didn’t skimp with suspension on the 2007 Yamaha Raptor 250. At the front is a double A-arm suspension, a set of preload-adjustable shocks, and 7.5 inches of suspension travel, which just happens to be the best in its class. At the rear, the swingarm features an eccentric chain adjuster and a nitrogen-charged rear shock that offers 7.9 inches of travel.  Thankfully, at both ends are a set of disc brakes to bring everything to a quick stop.

Customize
The new 2007 Yamaha Raptor 250 comes in two colour schemes, either Yamaha Team Blue, or Gray/Red, but there are also two special edition colour schemes available as well, including a black/orange. The black/orange scheme is very much like the special edition Raptor 700, which even has a nifty carbon fiber look-alike hood.  For riders that really want to customize their ride, there is an all black model that comes with a couple different graphics kits, and as usual, there will be plenty of GYTR accessories available.

Welcome to the Yamaha Family
The new 2007 Yamaha Raptor 250 promises to be every bit as much a sport machine as its bigger brothers, the racy YFZ 450, and our all time favourite sport quad, the mighty Raptor 700. Unlike other models in the 250 class which are usually warmed over utility units wrapped in sporty plastic, and often feature shaft drive, CVT systems, and lots of weight, the Raptor 250 leaves little doubt it is meant for serious play. We can’t wait to take it to the track, trails, and dunes!