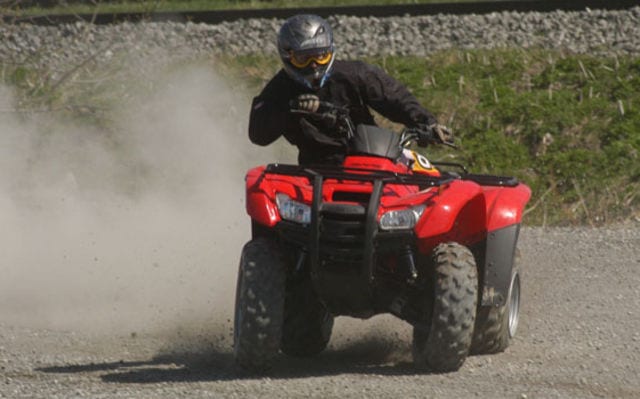 There’s an old saying that goes like this: “Bigger is not necessary better!” It’s proven that extra power can create an adrenaline rush but they also create the eventual loss of control if done without masterful experience and ability. The major question is: Do we need all this power? I have trail-tested the new 2007 Honda TRX 420 and I was surprised by its power, agility and low centre of gravity. We’re talking about a well-balanced ATV; capable of fun for a “newbie” or a neophyte, but more importantly, it’ll make you happy while you’re riding it.

Those who read my articles know how much fun I’ve had in the past on the smart little TRX250. My photographer used it to follow me around and even though we rarely performed maintenance on it, we never had to spend any money on it either. Back then, I liked racing after the bigger, more powerful units, just for the fun of it. I could ride easily through tight winding trails because of its light weight and maneuverability. My friends hated the fact that they could only catch me on the straight portions of the trails.  When I straddled the new 2007 Honda TRX 420, I felt the same way but with an added over- dose of power and technology. If you own a TRX350 and you try this new model, there are chances that you’ll be visiting your local hardware store to buy a “for sale” sign; put  the 350 in the front yard and hope to sell it soon enough to go and get this new little 420 toy.

This machine is undeniably Honda and it’s hard to find fault with the assembly and part quality. This little four-wheel monster has a sleek body, is easy to look at, and when you sit on it, the ergonomics just naturally blend  the whole unit together. Big or small, it’s impossible not to feel good sitting on this quad. The handlebars are at the proper height and the footrests are wide and easily accommodate foot movement. One important part that could be improved is the seat; it’s not as hard as plywood but a little cushioning could make it more comfortable. To change the five gears;  just push “up” on the button to get from 1st to last gear or push “down” to downshift and that’s it. The reverse gear is a nuisance though; I’ve never had so many maneuvers just to back up! I had to press the red button on the rear brake lever, while firmly holding the brake lever and downshift one gear. There’s a lever on the left side to change from 2WD to 4WD.

What makes the TRX420 so nice to use is the new liquid-cooled 420cc engine. It offers power on take off and good acceleration. It leaps on contact of the accelerator but stays predictable and not intimidating. A notable improvement is the added electronic fuel injection that eases the cold starts. One of the drawbacks on the TRX350 is with the initial start of the day; the engine stops when idling, so you have to stand beside it until it warms up. The fuel-injected engine will start instantly without any trouble, even in the winter, and without carburetor adjustments. This new engine is installed longitudinally, which allows the direct alignment of the front and rear shafts. It maximizes power because the friction points that could hold back horsepower to the engine are non-existent.  The engine is lower on the frame so the centre of gravity is also lower, adding to stability and improving maneuverability to the quad.

The frame is suspended on a front double A-arm suspension but there is no way to adjust the shock absorbers so if you add weight on the front rack, you’ll feel it on the steering. There’s a steel swing arm at the rear linked to a single shock equally non-adjustable. These are better calibrated than the older ones as there is less rebound. The  rebound is not to fast and the shocks are not too firm, which gives it a nice balance for an ATV without a fully independent suspension. In fact, while riding full speed, I could still keep the speed even on rougher trails.  Honda has never built an ATV with large ground clearance like the competition, so this one has a tendency to rub against big obstacles.

In order to hold back this Honda, the TRX has new front disc brakes and a rear drum brake. Brake power is surprising and it’s easy to use in technical braking. If you want to play in the mud, you can put it into 4WD and count on a torque-sensing front differential.  It has a tendency to make three wheels turn instead of all four. If this happens, just press slightly on the front brake lever and this will create enough resistance on the front wheels and the torque will be evenly distributed to the front. The weight of this ATV is worth mentioning because its dry weight is 564 lbs!  We can lift it without having a heart attack, which is a far cry from the majority of the other units with superior weight. This low weight improves its agility and control and securely eliminates the possibility of rolling over. Being injured severely is less likely to happen if it should roll on top of you in a fall. The 800 lb. units just can’t compete here.

Test results
While testing, I really let loose with the 2007 Honda TRX 420 because it’s so easy to handle. It can zigzag between trees without effort and the short turning radius makes it simple to turn around even in narrow trails. Acceleration is quick and climbs to 89 km/h which isn’t bad for a 420 cc. The gear changes have to be done quickly because it doesn’t like to ride in the red zone.  At full speed in a straight line, it stays on course with precise steering. You can change course and it will react accordingly. This ATV is a good climber because of its lower centre of gravity, it was really amazing the way it stayed stable in a perpendicular part of the incline. If I had to ride in a very technical and uneven area, I’d certainly choose this model instead of one with a fully independent suspension that offers less stability in rough terrain. It crosses water and mud patches easily and even though we can’t block the front powered axle, this model is so light that you just shake it and it will climb out of ‘sticky’ situations. In any condition and anywhere it may go, this  new Honda comes out shining and unscathed and heightens its level of dependability.

Conclusion
These last months I rode on high-cylindered units with tons of ego-satisfying torque power but I was really impressed with my experience on this new 2007 Honda TRX 420. It’s a Honda thoroughbred from “part to assembly” in a simple, well thought out plan.  It doesn’t have the power of the Rincon 680, but it’s so easy to ride that it compensates for the lack of it and can really put the bigger units to shame in narrow trails.

The 2007 Honda TRX 420 has earned a place on my list of favourite ATVs and is the kind of unit you can keep for a long time with a good resale value.